Although Egypt officially welcomes the end of the kafala system in Saudi Arabia, some observers worry the changes will be largely cosmetic as abusive work contracts remain in place. 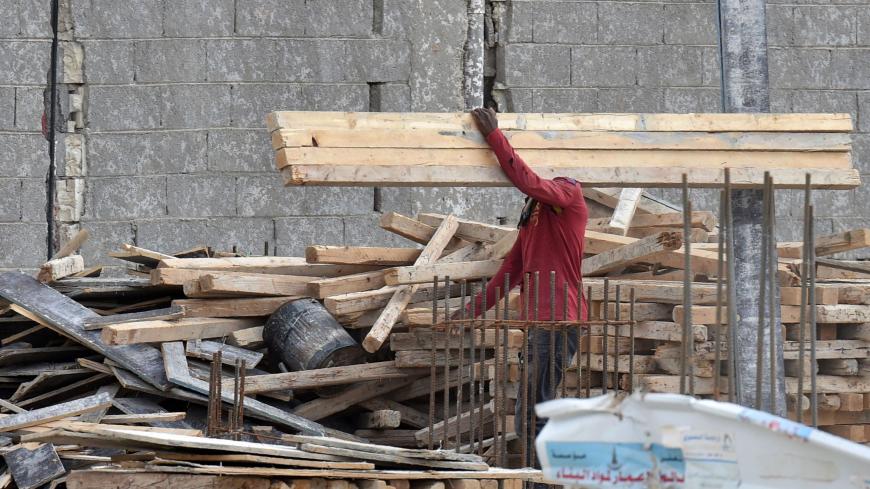 A foreign laborer works on the construction of a house in the Saudi capital Riyadh on April 13, 2019. - FAYEZ NURELDINE/AFP via Getty Images

Egyptian Minister of Manpower and Immigration Mohammad Saafan announced Nov. 6 that Egyptian labor in Saudi Arabia will receive unprecedented privileges upon the abolition of the kafala system, which has been in force for more than 70 years.

Saafan said such privileges include increased freedom in changing jobs and visas that will allow workers to leave the kingdom for vacations or permanently without the consent of a Saudi sponsor. Work contract terms still apply, such as notifying the employer of changing jobs or leaving the kingdom as well as sufficient notification for leave requests.

The Saudi Ministry of Human Resources and Social Development announced Nov. 4 that the Labor Reform Initiative will improve the labor conditions of migrant employees through ending the kafala system. The abolition of the kafala system for all migrant workers in the private sector will take effect in March 2021. Notably, five employment categories will be exempt: drivers, guards, domestic workers, shepherds and gardeners.

Ahmad Abaza, undersecretary of the Arab Affairs Committee in the Egyptian Parliament, said in press statements on Nov. 7 that the changes are a "dream" for Egyptian workers will also have a positive impact on the kingdom, as they will encourage skilled Egyptian workers who have long preferred to avoid the kafala system to explore Saudi Arabia. “Since the kingdom will now be more attractive for skilled workers, productivity and efficiency in the work environment are bound to flourish,” he added.

Hamdi Imam, chairman of the Egyptian Chamber of Commerce's division that regulates foreign recruitment, told Al-Monitor that Egyptian labor is the largest group that will benefit from these decisions. He noted that more than 55,000 Egyptians were being hired in the Gulf every month before the coronavirus outbreak and the suspension of flights from and to Egypt in March 2020.

He said that preparations are currently underway through Egyptian recruitment companies that secure jobs abroad for Egyptian youth and the paperwork of 200,000 Egyptians who were recruited for jobs in the kingdom since February is being processed after the coronavirus crisis and suspension of flights between countries prevented them from traveling.

He added, “Previous numbers confirm that Saudi Arabia is still an attractive country for Egyptian labor, and it will be more so after the kafala system is abolished.”

However, Y.C., an Egyptian accountant who works in Saudi Arabia and preferred not to reveal his name, has a different opinion. Speaking of the Saudi nationalization scheme to increase employment of Saudi nationals and reduce reliance on foreign workers, he told Al-Monitor, “Saudi Arabia and Gulf countries in general are no longer attractive for Egyptian labor due to the kingdom’s Saudization scheme in the private and public sectors and given its economic recession. Vacancies have dropped, salary offerings have been reduced and thousands of Egyptian workers have been laid off.”

There are no official figures available for the number of Egyptian workers in Saudi Arabia, but Egypt's last census conducted in 2017 counted 2.9 million Egyptians in the country.

Essam Abou el-Yosr, head of the research and statistics department at a nongovernmental organization called the Federation of Arab Migrants in Saudi Arabia, told Al-Monitor that 90% of the 2.9 million Egyptians in Saudi Arabia are employed there, while the remaining 10% are their family members.

Abou el-Yosr indicated that around 30% of Egyptian migrant workers in Saudi Arabia, some 780,000, left the kingdom between 2018 and 2020 due to the Saudization plan. The coronavirus outbreak prevented hundreds of thousands of Egyptian workers on leave outside Saudi Arabia from returning to their jobs, thus terminating their contracts. He said that more than 40% of the Egyptian workers who lost their jobs were due to the coronavirus, an issue that was “more impactful than the Saudization scheme.”

Yasser Abou el-Fotouh, an Egyptian former sales team leader in a Saudi company who was stuck in Egypt after the suspension of flights, told Al-Monitor that he is considering finding a new job in Saudi Arabia, especially after the abolition of the kafala system. “When I lost my job because of the travel suspension, I decided to settle in Egypt, but working without a guarantor is really attractive. The Saudi work environment was perfect on all aspects except for kafala,” he added.

Rashad Abdo, head of a research center called the Egyptian Forum for Economic Studies, told Al-Monitor that the decline in the number of Egyptian workers in Saudi Arabia and available opportunities is temporary, explaining, “The Saudi economy was able to overcome the coronavirus outbreak with the least possible losses, which means that it still can hire thousands of workers. The Saudi market will soon need skilled Egyptian workers to compensate for the losses.”

The Saudi General Authority for Statistics said in a statement Sept. 30 that the Saudi economy contracted by 7% during the second quarter of 2020, when the coronavirus outbreak peaked. Many economic observers see this figure as promising compared to many Arab and global economies that are experiencing greater downturns.

Mohammad al-Awadi, an attorney specializing in helping Egyptians accused of violating kafala laws in the Gulf countries, told Al-Monitor that Saudi Arabia was less strict in implementing its kafala system on Egyptians, compared to other Gulf countries like Qatar and Kuwait. However, he indicated that whether the kingdom becomes more attractive for Egyptian labor when the kafala system is abolished depends on the actual implementation of the Labor Reform Initiative.

He added, “The initiative must regulate the work contract terms to ensure that they are not more abusive than the kafala system, like the contractural condition to notify the employer of changing jobs — within or outside the kingdom — more than three months ahead of time. … I also hope the end of the kafala system will be a prelude to releasing Egyptians punished in the kingdom on the grounds of violating this law.”

Deutsche Welle warned Nov. 7 that the abolition of the kafala system might be a mere formality as workers continue to suffer under abusive labor contracts.