The difficult economic conditions and nationalization of jobs in Gulf states have caused a problem for Egyptians willing to work overseas, and prompted thousands to return home. 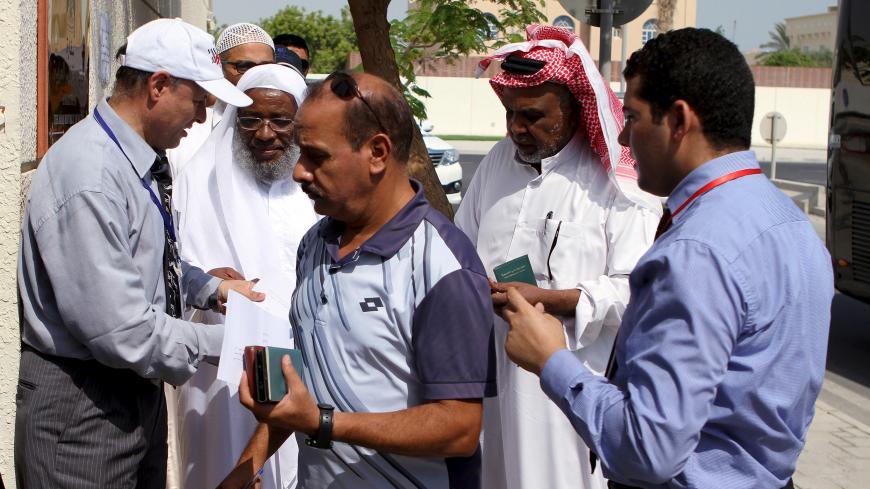 Egyptians living abroad arrive to cast their votes during the first stage of Egypt's parliamentary election at the Egyptian Embassy in Doha, Qatar, Oct. 17, 2015. - REUTERS/Naseem Zeitoon

CAIRO — The Division of Recruitment Companies at the Cairo Chamber of Commerce held March 3 a meeting, which Al-Monitor attended, to discuss the findings of the committee formed in December 2018 to identify ways out of the crisis facing the recruitment of Egyptians for jobs abroad. The committee was also tasked with proposing alternatives to the Gulf states, which have opted for policies to nationalize jobs available in their markets.

Ahmad al-Rai, recruitment director at the Cairo-based El-Owaida agency, gets dozens of phone calls daily from individuals looking for a job in the Gulf states. He takes the job seekers' contact details and promises to get in touch once work visas are granted again.

The number of people for whom the agency managed to secure a job in the Gulf, particularly in Saudi Arabia, has dwindled by more than 70% since 2017. Rai told Al-Monitor that only 600 workers were employed in the Gulf in 2018 compared to more than 2,150 in 2014.

El-Owaida, which has been operating since 1998 and has three other offices in different Egyptian governorates, mainly caters to the Saudi market’s demand for construction engineers and workers.

Rai said that the construction sector in Saudi Arabia has witnessed a major decline with the Saudi government adopting policies to cut expenses and subsidies in this sector as oil prices have plummeted since 2014. “This has caused the firm to lose an important part of its recruitment services,” he added.

In the past two years, hundreds of recruiters in Egypt witnessed a decline in available jobs in the Gulf. These agencies are now looking for new markets as a way out of the crisis ensuing from the war in Yemen, drop in oil prices and nationalization of jobs in the Arab Gulf.

Hamdi Imam, chairman of the Division of Recruitment Companies at the Cairo Chamber of Commerce, told Al-Monitor, “The Gulf’s demand for Egyptian workers has decreased by 80% since 2017.” He noted that nearly 200 out of 1,200 recruitment agencies officially registered with the Ministry of Manpower and Immigration have forcibly closed their doors since 2015. He attributed the decline to the worsening situation in Saudi Arabia, as well as other Gulf states, due to the war in Yemen and drop in oil prices.

At its March 3 meeting, the committee, headed by the division’s Deputy Chairman Abdel Rahim el-Morsi, put forth a number of proposals to resolve the crisis. It suggested to resort to African Union (AU) countries — mainly Nigeria, South Africa, Niger and Ghana — as Egypt is currently presiding over the AU. The committee believes it is necessary to coordinate with the commercial attache at each of the Egyptian embassies in AU countries in order to identify the target sectors. It also announced that a new initiative, dubbed “Egypt in Africa” and designed to open up new markets to the Egyptian labor force, will be launched at the division’s March 31 conference.

Moreover, the committee suggested coordinating with the Egyptian security services to allow Egyptians to work in Libya again. A Libyan delegation from Benghazi had asked to involve Egyptian workers in the reconstruction of the city during its Jan. 8 visit to the Chamber of Commerce.

Morsi also came up with the idea that Egyptian workers willing to work in Africa attend a three-month training course at a training center run by the Ministry of Manpower and Immigration.

Secretary-General of the Division of Recruitment Companies Khaled Mustafa explained at the March 3 meeting that supervisors speaking the language of the African countries could accompany the Egyptian workers to facilitate communication with the employers. He stressed the need to counter fake recruitment companies, via a social media campaign to raise awareness among those willing to work abroad.

On Dec. 16, 2018, the Division of Recruitment Companies had held a meeting at the Cairo Chamber of Commerce bringing together the directors of most of the recruitment agencies with the goal of finding solutions to the great recession in this sector. As a result, a committee was formed to identify potential new markets outside the Gulf states, with the help of the Ministry of Manpower and Immigration.

According to its 2017 report, CAPMAS indicated that 9.5 million Egyptian workers are employed overseas, mostly in Saudi Arabia, followed by Kuwait, the United Arab Emirates and Qatar. The Central Bank of Egypt reported in August 2018 that remittances by these workers amounted to $26.5 million in fiscal year 2018.

During the meeting in December, the participants conversed about the reasons behind the declining demand for Egyptian workers, spearheaded by the "Saudization" of several sectors since 2016 to reduce the unemployment that reached 12.1% among Saudis in 2016. Workers in pharmacies and phone shops, and those driving small and medium lorries are mainly affected.

The Saudi authorities embarked Jan. 7 on the implementation of another phase of the Saudization plan, which involves limiting 12 job types to Saudis, including jobs at shops selling motorcycles and automobiles, clothes, home appliances, electronic devices, medical equipment, construction and building materials, auto parts, carpets and sweets.

Likewise, Kuwait launched in July 2017 a five-year program to "Kuwaitize" jobs and thus recruit nationals instead of migrant workers. On Aug. 26, 2018, the government announced that of the 44,572 individuals it employs the 3,140 government positions for non-Kuwaitis would be canceled. The measure was put into practice in the first year of the program.

Kuwaiti newspaper Al-Anba quoted in April 2018 sources as saying that Egypt comes second in terms of the number of migrant workers in Kuwait, with 610,000 people. Yet there are no statistics on the number of Egyptians in a government job in Kuwait or the key sectors they work in abroad. In January, the Ministry of Manpower and Immigration said the preparation for a database on the Egyptian labor force abroad is underway.

Abdul Meneim al-Sharawy, chairman of Al-Sharawy, a recruitment agency for employment abroad, told Al-Monitor the slump in oil prices and subsequent decline of the Saudi real estate sector and the war in Yemen have had an impact on the Saudi work visas available for the agency.

He said that the Saudi work visas available are limited to domestic workers, drivers and employees in some medical fields. Sharawy said that 2018 had been the worst year for his agency since its inception in 1984, noting that his firm managed to find jobs for only 40 people in the Gulf, mainly in Saudi Arabia and Kuwait, compared to 250 in 2014.

Imam estimated that more than 250,000 Egyptian workers returned from Saudi Arabia in 2018, and expects the same number of Egyptians to return home in 2019.

Ahmad Abdo, executive director of El-Rahma, a recruitment agency for international employment, told Al-Monitor that opening up new markets to Egyptian workers would not be fruitful in the long run. He said that such a proposal would face several problems, as the workers neither speak the same language nor have the skills required for these markets. In addition, there is a lack of coordination between the recruiters in Egypt and employers in these markets, and lack of trust on the part of Egyptian workers in the offers made.

Abdo said that his agency was granted work visas in Malaysia early last year, but that the Egyptian job seekers, however, were not interested.