While studies expect an economic catastrophe in Egypt due to the coronavirus-related recession of the Gulf economy and the resulting demobilization of thousands of Egyptians working abroad, some observers believe that the return of Egyptian workers will develop an efficient Egyptian labor market. 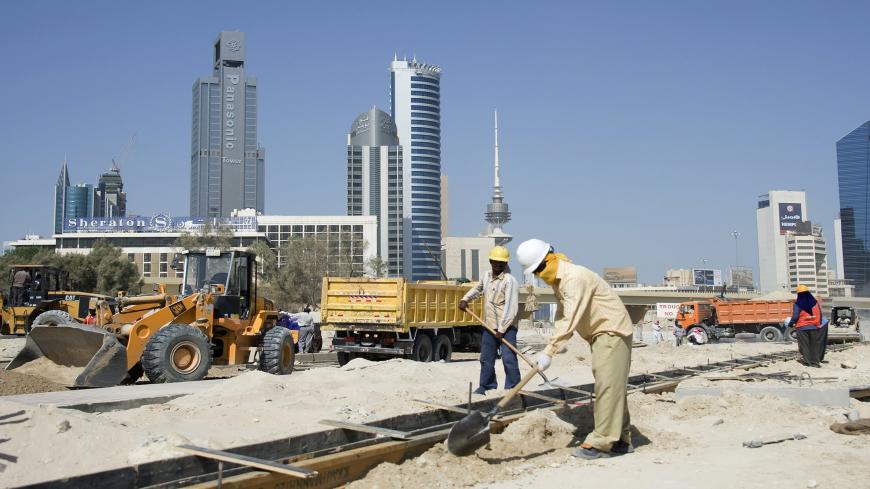 Construction workers are seen on the site of a newly constructed bridge that is nearing completion at the Jahra roundabout in Kuwait City, Kuwait, Sept. 1, 2011. - REUTERS/Jassim Mohammed

CAIRO — A study released May 29 by the Institute of National Planning, a government institute, revealed that due to the spread of the coronavirus in Egypt and the precautionary measures taken by the state and some private sector institutions, such as curfews and reduced working hours, a potential increase in the unemployment rate is expected from 8% at the end of 2019 to between 11.5% and 16% by the end of 2020.

According to the numbers mentioned in the study, around 1.2 to 2.9 million citizens are at risk of losing their jobs, 824,000 of whom are already unemployed, not to mention the return of thousands of Egyptian workers from abroad.

The study stated that the increase in the unemployment rate to such percentages will in turn lead approximately 5.6 to 12.5 million citizens to live below the poverty line. It also pointed out that the worst-case scenario was developed based on the possible return of more than 1 million Egyptians after losing their jobs abroad.

Sherif Samy, a management professor at the Faculty of Commerce at Ain Shams University, told Al-Monitor that most Egyptians who lost their jobs were working in the tourism sector, which he ruled out would return to normal activity before 2022, or were working abroad, especially in the Arab Gulf states.

“These countries are expected to reconsider and restructure their need for dense foreign labor with the aim of reducing their expenditures to weather the crisis,” he noted.

Samy said that in light of the economic recession in the Gulf states due to the coronavirus pandemic and the resulting fall in the returns of oil and natural gas contracts, the Gulf countries may lay off the highest paid foreign workers, namely US and European laborers, followed by Egyptians, thus leading the remaining laborers to take on more work, be they nationals or lower paid expatriates such as Indians, Pakistanis or Bengalis.

Samy believes, however, that the return of Egyptian workers from abroad, whether from the Gulf or any other region, would have a positive effect on the labor market in Egypt in the medium and long term.

He said that many Egyptians working abroad are skilled laborers who can help Egypt develop plans and projects launched under the auspices of President Abdel Fattah al-Sisi, be they state-owned projects or ones carried out in partnership with the private sector.

Minister of Immigration and Expatriate Affairs Nabila Makram announced May 24 that Egyptians returning home are requested to fill out a form to determine their field of expertise and qualifications. The ministry will then investigate how each returnee's skills can be used to benefit Egypt Vision 2030, the development plan that Sisi launched in 2016.

A well-informed source in the Ministry of Immigration told Al-Monitor on condition of anonymity that the form is distributed to Egyptians returning home aboard Egypt Air’s flights that repatriate citizens from across the world.

Regular Egyptian and foreign flights to and from Egypt were suspended March 25.

The source noted that the returning Egyptians include people whose work contracts abroad have expired.

He said that the forms have yet to be counted and classified based on the expertise of the returnees, but “many of those whose work contracts have ended are returning from the Gulf region, especially Saudi Arabia, the United Arab Emirates and Kuwait, and their expertise could be of huge benefit specifically in the fields of civil engineering, contracting, education, medicine, marketing and business administration.”

On May 5, the Saudi Ministry of Human Resources and Social Development revised the executive regulations of the force majeure article of the Labor Law regulating the labor market in the event of major crises such as the coronavirus pandemic. The ministry thus allowed the private sector to reduce the salaries of national and expat workers by a maximum of 40%, and also allowed it to terminate any employment contracts after at least six months of the date of the amendment of the regulations.

Asked about the expected results of the decision, Rashad Abdo, head of the Egyptian Forum for Economic and Strategic Studies, told Al-Monitor that the contract termination step will lead many Egyptians to lose their jobs in Saudi Arabia in the coming months.

He said that many Gulf countries may follow the example of Saudi Arabia because most of the Gulf economies depend on oil, whose price is falling every day in light of the spread of the coronavirus.

He noted that the contract termination of Egyptians working in the Gulf will also have negative repercussions on the Egyptian state's resources, and not only on unemployment or poverty rates.

According to the latest statistics of the central bank for 2019, the remittances sent by Egyptians abroad to their families in Egypt are considered to be the main source of Egypt's foreign currency needs. Such remittances stood at around $26.8 billion, at a time when the Suez Canal revenues during the same year amounted to about $5.8 billion and tourism revenues to about $13 billion.

However, Saeed Yahya, president of the Union of Egyptians Abroad, Saudi branch, seemed optimistic about Egyptian employment in Saudi Arabia, in other Gulf countries and internationally.

Yahya told Al-Monitor that once the coronavirus crisis is over, the competition will be fierce among companies in different sectors to turn profits. He added that companies seeking to compensate for their losses will not venture into wasting trained Egyptian workers and skilled laborers that can help them achieve gains once the crisis ends.

He said there will be negotiations between Egyptian workers and officials in the public and private sectors to reach compromises, such as reducing salaries by a certain percentage until the end of the crisis and then returning to normal once losses are compensated.

“This will be an appropriate opportunity for many Egyptians in Saudi Arabia and the Gulf,” he concluded.