Egyptian workers in Libya have been repatriated after being detained and subjected to torture in Libya, which caused a national outcry in the streets and at the political level. 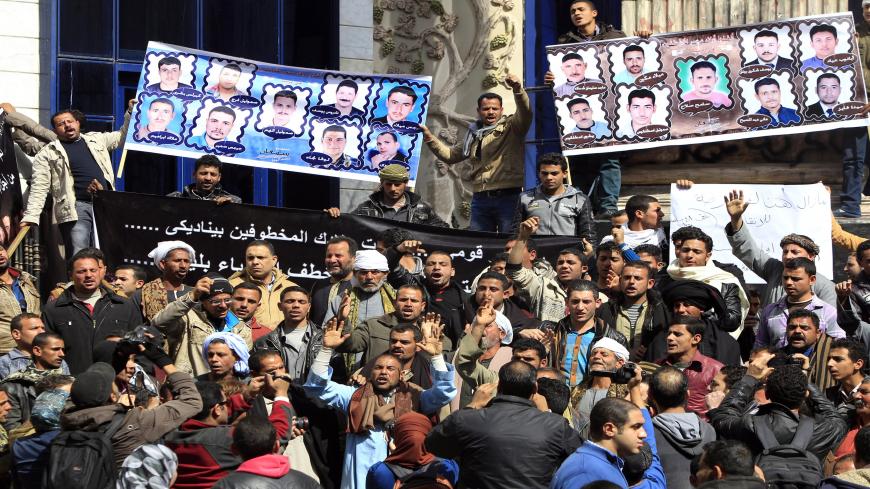 Relatives of 27 Egyptian Coptic Christian workers who were kidnapped in the Libyan city of Sirte, take part in a protest to call for their release, in Cairo, Egypt, Feb. 13, 2015. - REUTERS/Mohamed Abd El Ghany

Egyptian workers abroad have been facing several problems over the past few months, as a result of the economic repercussions following the outbreak of the coronavirus pandemic and because of the political differences of other countries with Cairo.

Dozens of Egyptian expats in Libya have been detained by militias loyal to the Government of National Accord (GNA) in the city of Tarhuna, 95 kilometers (59 miles) southeast of Tripoli. The detainees have been subject to torture as shown in video footage that circulated on social media June 14.

The abuse of the Egyptian workers in Libya sparked an angry outcry in the Egyptian street and at the political level.

Egypt's Minister of Immigration and Egyptian Expatriate Affairs Nabila Makram said during a meeting of the parliamentary Arab Affairs Committee June 15, “The Egyptian state will not remain silent on the assault against Egyptian expats and had previously taken measures following similar incidents that took place in the past. What happened in Libya will not go unnoticed.”

Alaa Abed, a member of parliament and head of the parliamentary Human Rights Committee, said during a public session in parliament June 15, “Egyptians in Libya are a red line and a strong and deterrent position must be taken regarding the torture of Egyptian expats who went there in search of a livelihood.”

Egypt's angry reactions prompted the GNA’s Ministry of Interior to announce June 15 that it would launch investigations in the incidents and arrest the perpetrators.

On June 17, the ministry announced the arrest of those involved in the abuse of the Egyptian workers who were released from detention.

The workers were deported from Libya to return home at the request of Egyptian President Abdel Fattah al-Sisi on June 18. The Egyptian government announced that job opportunities will be provided for the returnees who have been abused.

The Libyan incident was not the first problem for Egyptian workers abroad since the start of the coronavirus pandemic. On May 4, several Egyptian expats in Kuwait held a protest after being detained in shelter centers on charges of overstaying their residence permits, as part of Kuwait’s measures to reduce the number of expats to stem the spread of the novel virus. The Egyptians demanded to be expatriated swiftly for fear of contracting the coronavirus, but the protesters were quickly dispersed by the Kuwaiti security forces. The 5,600 Egyptians overstaying their permits in Kuwait were taken to 11 shelter centers.

On June 15, a plane arrived from Qatar with 174 Egyptian workers following restrictive measures to curb the spread of the virus that causes COVID-19. Qatar also witnessed workers’ protests demanding to receive their deferred payments.

On May 7, the Egyptian Ministry of Manpower announced measures to reduce the salaries of Egyptian workers in Saudi Arabia following contacts with the Saudis, with salary cuts ranging between 1% and 40%, and the possibility of terminating work contracts due to the COVID-19 crisis.

On June 6, the minister of manpower; the minister of planning and economic development; and the minister of immigration and Egyptian expatriate affairs sent early day motions to Prime Minister Mustafa Madbouly in regard to the government’s plan to integrate Egyptian returnees into the labor market.

Madbouly stressed June 5, “The government is reviewing the economic and living conditions of returnees, in terms of their qualifications, work experience and areas of expertise based on the forms they filled out during their stay in quarantine, in a bid to help them cope with the living conditions."

In a statement June 6, Makram said that 20,000 Egyptians and their families have been repatriated since the COVID-19 outbreak.

“I proposed the formation of a committee made up of several relevant ministries and representatives of civil society organizations as well as the private sector to carefully study the data of the returnees, so that the state would find them jobs and introduce them to small projects that can be supported through the Egyptian Micro, Small and Medium Enterprises Development Agency, or to inform them about the savings plan provided by Egyptian banks,” she noted in a TV interview.

Khaled Shaaban, who is a member of the parliamentary Committee for Workforce, told Al-Monitor, “Many Gulf countries have terminated the contracts of Egyptians and deported them in the wake of the coronavirus outbreak.”

“The parliament and government are working hand in hand to deal calmly with the crisis and to ensure the returnees receive their financial dues; in fact they have already received their payments. More expats are expected to return as the pandemic is not over yet,” Shaaban said, referring to the end-of-service indemnity and financial dues foreign employers owe the Egyptian expats.

In regard to the abuse of Egyptian workers in Libya, he noted, “The government will deal strictly with any state that mistreats Egyptian expats over political differences, via all diplomatic channels and would resort to the International Labor Organization that prohibits such practices and imposes sanctions on violating countries.” (Egypt is publicly supporting the Libyan National Army, led by eastern military commander Khalifa Hifter, against the pro-government forces that control most of western Libya, including Tarhuna, where the Egyptian workers were abused.)

Minister of Manpower Mohamed Saafan told Al-Monitor, “There is daily contact with Egyptians abroad through online labor office services that respond to all inquiries from the workers. The ministry is part of the crisis cells that have been formed in the Egyptian embassies and consulates to follow up on the status and problems of Egyptian workers abroad."

He added, “There has been coordination with the relevant parties abroad to safeguard the rights of Egyptian workers and to organize repartition trips from several Arab nations to repartriate them as soon as possible."