The fate of 2 million Egyptian workers in Saudi Arabia is on the line in light of Saudi measures to charge expat fees amid several political crises between Egypt and Saudi Arabia, including the dispute over Sanafir and Tiran islands. 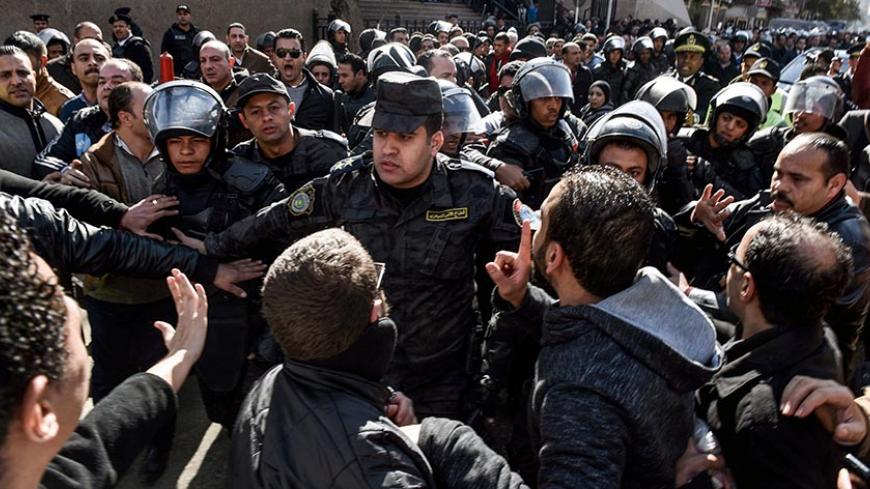 Egyptian riot policemen surround a march after the Supreme Administrative Court upheld a ruling voiding a government agreement to hand over two Red Sea islands to Saudi Arabia in a deal that had sparked protests, Cairo, Jan. 16, 2017. - MOHAMED EL-SHAHED/AFP/Getty Images

The “Saudization” of the workforce haunts Egyptian expats working in Saudi Arabia. It is difficult to determine when the term Saudization first emerged, but it seems to be extensively used in the media now, following the announcement of the Saudi Vision 2030 reform plan on April 25, 2016.

In Egypt on Jan. 16, the Supreme Administrative Court invalidated the maritime border demarcation agreement between Egypt and Saudi Arabia, denying Saudi Arabia sovereignty over the islands of Tiran and Sanafir in the Red Sea. This ruling seems to have brought to the surface Saudization measures against the Egyptian workforce in Saudi Arabia.

The Saudi Vision 2030 is a package of economic reforms and social policies, including mainly the nationalization of jobs to reduce reliance on foreign expats and the assignment of these jobs to Saudi nationals to curb the unemployment rate to 7%.

It seems that the Supreme Administrative Court's ruling was not the only reason behind renewed talk about Saudization of the workforce. The tensions prevailing over Saudi-Egyptian relations since October 2016 sparked fears among the Egyptian workforce in Saudi Arabia of nationalization of Saudi jobs or of discriminatory measures against Egyptian expats due to the political unrest.

Political tension between Egypt and Saudi Arabia emerged when the kingdom expressed discontent with Egypt's vote in favor of a draft Russian resolution before the UN Security Council for a cease-fire in Aleppo in October.

Talking about the possible repercussions of the strained relations on the Egyptian workforce in Saudi Arabia and addressing Egyptians celebrating the court ruling on the islands, Ahmed Moussa, the host of the Egyptian TV show “My Responsibility,” which aired Jan. 16 on the satellite channel Sada El Balad, said, “You should fear for Egyptian workers in Saudi Arabia. The relations with the kingdom must be safeguarded so that our expats keep their jobs there. Saudis have nothing to lose, but if our expats returned home, Khalid Ali would not offer them jobs at his office.”

Khaled Ali was among the team of lawyers who filed a lawsuit with the Administrative Court disputing the validity of the maritime border demarcation agreement and led the celebrations that erupted over the ruling outside the court.

Moussa said, “If Saudi Arabia expels Egyptian workers, the Gulf states will follow suit. This would mean that 6 million Egyptian workers will return home. Who can handle this? The Saudi public opinion is currently putting pressure on the Saudi leadership to kick out the Egyptian workforce.”

Commenting on the probabilities that the political tensions may backfire on the Egyptian workforce, Abdel Khalek Farouk, the former director of the Nile Center for Economic and Strategic Studies, told Al-Monitor, “It is unlikely that the kingdom would dispense with the entire Egyptian workforce at the moment because Saudi workers need to be trained to replace the Egyptian workers, who assume senior prestigious positions in the Saudi medical, engineering and educational fields.”

He described the confusion among the Egyptian workforce in Saudi Arabia as part of the general disruption of the Saudi economic climate. “I do not expect Saudi Arabia to remain a destination for the wealth-seeking workforce from all nationalities due to the economic crisis plaguing the kingdom,” he said.

Farouk added, “Saudi measures toward expatriates do not target Egyptians specifically. There are no political reasons behind these measures. Saudi Arabia is benefiting from the skilled Egyptian workforce, but is trying to overcome its economic and social crises.”

Egyptians working in Saudi Arabia were mainly confused and shaken by the news circulating in some Egyptian and Saudi newspapers in December 2016 about the Saudi Ministry of Finance’s plan starting in the second half of 2017 to introduce a monthly fee on the dependents of expatriate workers of 100 Saudi riyal ($27), which is expected to reach 300 Saudi riyal ($80) per each dependent in 2019.

Egyptians in Saudi Arabia were also frightened when the Saudi Gazette newspaper revealed on Jan. 19 the Saudi Shura Council's intention to discuss the imposition of a 6% fee on the amounts of financial remittances by expatriates.

On Jan. 23, the Saudi Ministry of Finance denied the news in an official statement, saying that the kingdom is committed to the principle of free movement of capital to and from Saudi Arabia in line with international trends.

Economic expert Medhat Nafeh told Al-Monitor, “Egyptians are one of the pillars of the Saudi labor market, numbering nearly 2 million.” He pointed out that many of them are trained, skilled and highly efficient workers who Saudi Arabia cannot dispense even if it is seeking to nationalize jobs to curb the unemployment rate among Saudis.

He added, “The rate of unemployment in Saudi Arabia is not high, and the crisis can be solved if a small percentage of jobs — now assumed by foreigners — is reassigned to Saudis. Such a step would resolve the crisis without significantly harming the Egyptian labor market in Saudi Arabia.”

Nafeh’s point of view is corroborated by figures and statistics issued by the Saudi General Authority for Statistics in February 2016 indicating that the number of Saudis unemployed reached 647,000 out of the total Saudi workforce. The statistics showed that the total number of workers in Saudi Arabia is 11.48 million, of which 5 million are Saudi nationals and 6.48 million are foreign workers. This means that the unemployment crisis among Saudi nationals could be solved by vacating only 9.98% of the jobs assumed by expatriates.

Nafeh said, “Even if the companies and institutions employing Egyptians in Saudi Arabia decided not to pay the expat levy on behalf of its foreign employees, this would not be a major crisis for the majority of Egyptian workers wishing to continue working in Saudi Arabia because the Saudi riyal exchange rate has almost doubled against the Egyptian pound after the liberation of exchange rates in Egypt, which means that the wages of these workers has doubled and that remittances to their families in Egypt represent twice the value of what it was in the past.”

Adel Hanafy, the deputy head and spokesman of the General Union of Egyptians Working Abroad and an Egyptian investor who resides and works in Saudi Arabia, said in a press statement to Masrawy news website on Jan. 18, “Egyptians are very well-treated in Saudi Arabia. Political dispute and the court ruling invalidating the islands’ Saudi ownership did not affect the Egyptian business environment in Saudi Arabia.”

It seems that the good financial situation of the Egyptian workforce in Saudi Arabia during the past decades may change due to Saudi expat fees and economic reform plans. One thing is sure, political tensions between Egypt and Saudi Arabia are not behind those plans.