Will kafala system come to an end in Gulf countries soon?

Egyptian expats expressed hope after Egypt and Kuwait signed a memorandum of understanding to regulate the status and sponsorship of workers, which paves the way for the elimination of the controversial kafala system. 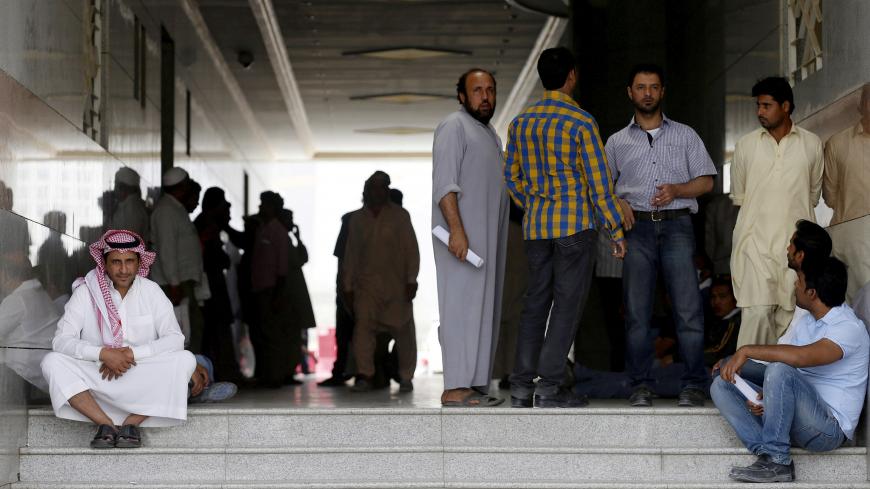 Calls for abolishing the kafala (sponsorship) system in the Middle East have been revived again following the memorandum of understanding signed between Egypt and Kuwait on Dec. 5, to regulate the sponsorship of Egyptian workers. The memorandum is paving the way for the elimination of this controversial system under which migrants work.

Under the memorandum — inked on the sidelines of the activities of the joint Egyptian-Kuwaiti committee in Kuwait — Egyptian workers can immigrate through an e-linkage system.

In a Dec. 5 press statement, Sultan al-Shaalani, the director for human resources and financial affairs at Kuwait's Public Authority for Manpower, operating under the supervision of the Ministry of Social Affairs and Labor, said that such an electronic system achieves two goals. The first goal is to ensure the recruitment of workers with adequate qualifications and skills, while the second is to combat human trafficking through the existing kafala system as well as eliminating the residency trade.

The memorandum signed with the Egyptian Ministry of Manpower is to be put into effect in 2019, after being approved by the Kuwaiti Cabinet. The exact date of entry into force has yet to be determined.

This move came in light of the efforts exerted by Kuwait's Public Authority for Manpower to control the labor market following Shaalani’s Dec. 5 press release.

“We, the expats, decided to bear the brunt of such humiliating system with the sole aim of escaping the dire economic conditions that hard hit our pockets in our country. We cannot oppose the kafeel [sponsor] for fear of being deported. This memorandum gives me a glimpse of hope that our dignity will be restored,” an Egyptian mechanical engineer, who works in Kuwait, told Al-Monitor on condition of anonymity in a telephone conversation. He has been working in Kuwait for more than 14 years and called the kafala system “modern-day slavery.”

He complained that “Egyptian expats are living at the mercy of their employers who control everything. For instance, once I arrived in Kuwait my sponsor confiscated my passport so I cannot change my work or leave the country without his permission.”

The kafala system offers sponsorship for a foreign and migrant worker by a national who is usually his employer, so the worker can legally reside and work in the country. This system, which is extensively criticized on the international level, is adopted by Gulf countries including Kuwait, Saudi Arabia and Oman. Under this system, the kafeel, which can be an individual or a company, has the upper hand and immensely undermines the mobility of the employee.

Nevertheless, the Gulf states remain an appealing hub for Egyptians who are grappling with deplorable economic conditions at home and struggling to improve their living standards.

The kafala system has always been criticized by human rights organizations. In 2009, Bahrain became the first Gulf country to end this system.

“Current sponsorship regimes in the Middle East have been criticized for creating an asymmetrical power relationship between employers and migrant workers — which can make workers, and especially migrant domestic workers, vulnerable to forced labor,” a report issued on May 8, 2017, by the International Labor Organization said.

“This system is not applied to Europeans and Americans. Only Egyptians or Arabs are subject to this unfair employment framework. It is time to end such discriminatory system,” the Egyptian engineer said.

Speaking to Al-Monitor, Gamal el-Okaby, undersecretary of Parliament's Manpower Committee, lauded the Egypt-Kuwait memorandum, stressing it would help secure the rights of Egyptian expats. “On the political level, this move will give an extra boost to the bilateral ties between the two countries. We found many cases where sponsors blackmailed expats. So this archaic system should come to an end,” he said.

Meanwhile, Okaby pointed out that the essence of the kafala system is to give nationals a chance to look after the non-nationals. “But due to the malpractices committed under the umbrella of this system, many organizations have called for ending the system and adopt the modern principles that strike a balance between the worker and employer's rights,” he concluded.