An Islamic scholar has stated that the Quran does not forbid Muslim women from marrying non-Muslim men as the endless debate on interfaith marriage continues in Egypt. 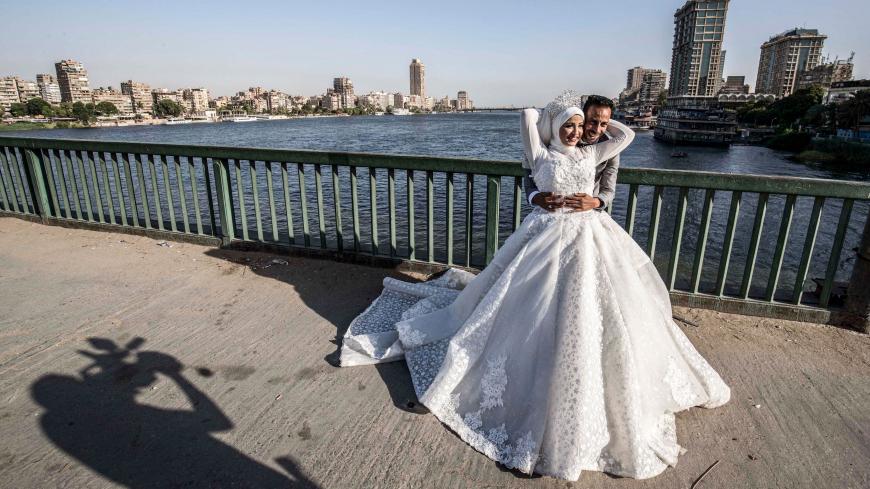 Ragab Uwais, 29, poses for a picture with his bride for their wedding video along al-Gamaa bridge connecting the Egyptian capital Cairo with its twin city of Giza, on June 11, 2020. - KHALED DESOUKI/AFP via Getty Images

CAIRO — An Islamic scholar has stirred up major debates by backing the marriage of Muslim women and non-Muslim men, an issue always dealt with nervously by the religious establishment and pro-establishment scholars.

Amna Nosier, a professor of Islamic philosophy at Al-Azhar University and a member of the Egyptian Parliament, said there is no text in the Quran that bans the marriage of Muslim women and non-Muslim men. Islam permits Muslim men to marry non-Muslim women, provided that they do not prevent them from observing their faith.

There are many instances of Muslim men, including celebrities, who have married non-Muslim women. Egypt's former minister of religious endowments, Mahmud Hamdi Zakzouk, who died in April this year, was married to a German Christian woman.

Speaking on al-Hadath al-Youm TV Nov. 17, Nosier added that the question is especially clear if the men are Christians or Jews, which Islam calls “people of the book."

A day later, Nosier told the state-run Channel One TV that the Quran only forbids the marriage of Muslim women and "idolaters." She called on religious scholars to study and reconsider the issue.

Nosier's remarks were met with a round of fatwas from the nation's religious establishment and pro-establishment scholars.

Al-Azhar, the highest seat of Sunni Islamic learning, said the marriage of Muslim women and non-Muslim men is not permissible.

“This is an issue on which all scholars agreed in the past and agree in the present,” Al-Azhar said in a Nov. 18 statement.

Abdullah Rushdi, a researcher at the Ministry of Religious Endowments, which oversees the work of the nation's mosques, described this type of marriage as a form of adultery and "invalid" in a video uploaded Nov. 18.

Ahmed Kerima, a professor of comparative jurisprudence at al-Azhar University, said all Muslim scholars are united against this form of marriage.

“This is a well-established opinion at all times and everywhere,” Kerima told Sada al-Balad TV Nov. 18.

Whether Muslim women should be allowed to marry men who do not follow their faith is an issue that has always been the subject of anxious and acrimonious discussion.

The religious establishment says the Quran speaks against this marriage beyond any doubt, citing verses from the holy book of Muslims that ban the marriage of Muslim women and “idolaters.”

Nevertheless, those calling for sanctifying this form of marriage draw a line between "idolators" and "people of the book."

Beneath this row lies a need for the reexamination and reinterpretation of religious texts, say religious reformists, especially concerning issues on which the scriptures do not offer clear rules.

“The fight over interfaith marriages is now within Al-Azhar,” said Khalid Montasser, a medical doctor, writer and staunch campaigner for religious reform. “It is between those who want renewal and those who want to keep things as they are with the aim of controlling the public,” he told Al-Monitor.

Historian and researcher Maged M. Farag, one of thousands of people debating interfaith marriages in cyberspace in the past few days, said he knows of dozens of Muslim women who married non-Muslim men.

“They register civil marriage contracts in Lebanon, Cyprus and other countries,” Farag said. “Some non-Muslim men even convert to Islam on paper only. Those living outside Egypt do not care a whit about the fatwas of these sheikhs,” Farag wrote on Facebook.

Nosier says these problems are why there is an urgent need for religious scholars to discuss modern issues and guide believers on dealing with them.

“This is a very serious issue that affects the lives of millions of Muslim women living in the West,” Nosier told Al-Monitor. “Some of these women have to live with their non-Muslim partners without being married to them, as their religion prohibits it. We must renew our understanding of religion to keep up with the changes happening in our life.”

The issue became a hot topic in Egypt after Tunisia overturned a law that prevented Muslim women from marrying non-Muslims in 2017.

Muslim men being permitted to marry non-Muslim women gives rise to accusations that men interpret religious texts in their own interests.

“Men dominate the interpretation of religious texts,” feminist writer and equality campaigner Dena Anwer told Al-Monitor. “Women can no longer be ignored, especially with the major role they play in society.”

TV host Yasmine el-Khateib expressed the view that allowing Muslim women to marry non-Muslim men would be the “correction” of a mistake men make by giving themselves rights they deny women.

The ongoing debate is likely to continue and deepen, but may or may not lead to social change.

Cases of interfaith marriage often elicit shock and condemnation among a large number of Egyptians. Under this shock is the unwavering stance of the religious establishment that these marriages are unacceptable in Islam, especially if they are of women marrying non-Muslim men.

Mohamed Gamal, a civil servant in his early 40s using a pseudonym, said he married a non-Muslim woman even as everyone around him opposed it.

He said he has to hide his wife's religious identity to avoid trouble. "Everybody is against interfaith marriages, even as Muslim men are permitted to marry non-Muslim women," Gamal said.

Al-Monitor contacted several Muslim women who have married non-Muslim men, but none were ready to talk.

“Muslim scholars prohibited the marriage of Muslim women and non-Muslim men at all times and everywhere, having based their judgment on strong evidence,” said Osama al-Hadidi, the director of the Al-Azhar Fatwa Center, the website through which Al-Azhar reaches out to Muslims around the world. “They did this for the welfare of families,” he told Al-Monitor.