How does Erdogan get away with it all?

The United States and European Union’s inertia may allow Turkey to threaten de-escalation efforts in Libya and South Caucasus. 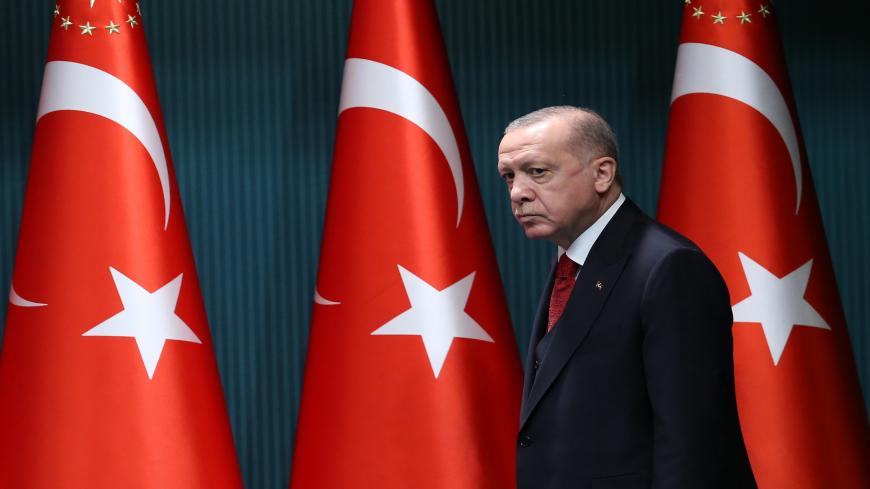 Turkish President Recep Tayyip Erdogan arrives to give a press conference after the Cabinet meeting at the presidential complex in Ankara, Turkey, Sept. 21, 2020. - ADEM ALTAN/AFP via Getty Images

The United Nations brokered an agreement between Libya’s two main warring factions for a cease-fire in Geneva on Oct. 23. Stephanie T. Williams, deputy secretary-general of the UN and acting special envoy to Libya, announced that “the two sides agreed to a complete, countrywide and permanent agreement with immediate effect.”

Williams said that the agreement called for front-line forces to return to their bases and for the withdrawal of all foreign forces and mercenaries from the country within three months — a process that would be monitored by the UN.

She referred to the agreement as “historic,” and extended her thanks to “the President of the Presidency Council, Mr. Fayez Sarraj, and the other members of the Council, the Speaker of the House of Representatives, Mr. Agila Saleh and Field Marshal General Commander Khalifa Hifter.”

The UN “saluted the agreement” reached “thanks to the efforts of Stephanie Williams,” describing it as pointing to “a better, safer, and more peaceful future.”

The European Union was also quick to welcome the Libyan compromise and pledged its support. EU foreign policy chief Josep Borrell did not miss the opportunity to highlight the importance of the immediate withdrawal of all foreign fighters and mercenaries. “All foreign fighters and mercenaries must withdraw immediately. All foreign intervention is unacceptable. On its side, the European Union stands ready to support the implementation of the Ceasefire Agreement with concrete actions, in accordance with the UN Security Council decisions,” he said in his statement. A day after the agreement, Russia declared its support to it.

It was only Turkish President Recep Tayyip Erdogan who was cynical about the Libyan cease-fire agreement. After its announcement, he described the deal as lacking in credibility, and that time will show its reliability. Thus, he cast doubts on the cease-fire’s sustainability as the UN, EU and the rest of the leading players in the conflict had wished and hoped.

Ankara is disgruntled by the agreement since one of the most important items in the agreement stipulates the termination of foreign forces' presence and expelling all the mercenaries from Libya. That article targets Turkey directly as it enjoys the facilities of al-Watiya, the strategically important air base in western Libya, and a naval base in Misrata. Especially the latter is essential for Turkey to sustain its ambitions in the eastern Mediterranean. Moreover, there are Syrian mercenaries that Turkey has transported to the Libyan killing fields.

Interestingly, the forces aligned with Libyan warlord Khalifa Hifter interpreted the Geneva deal as a way of getting rid of Turkish influence on the Libyan affairs. The spokesman of the Hifter-led Libyan National Army, Maj. Gen. Ahmed al-Mismari, supported the deal, saying that “excluding Turkey from the Libyan scene is a priority” to ensure the success of the peace talks.

Therefore, it is understandable that Erdogan has no interest in the implementation of the Geneva agreement. His cynical remarks on the deal are a veiled threat to resume the fighting.

Yet how come Erdogan can challenge the UN, EU, Russia and all other interested parties that subscribe to the Geneva deal?

He can. He has powerful cards to play the role of a spoiler because he holds the strings of some factions that make up the Tripoli government in Libya. In other words, he has influence over some members of the Tripoli-based Government of National Accord.

Indeed, powerful Interior Minister Fathi Bashagha and the Muslim Brotherhood, seemingly, did not commit themselves to the deal as Fayez al-Sarraj did. That's why the London-based, pro-United Arab Emirates' media outlet The Arab Weekly wrote, “Analysts, however, believe that the possibility of a new outbreak of fighting in Libya is not remote, especially in light of the United States’ insistence on not recognizing any Russian role in the country. Such fears were reflected in statements by the Secretary-General of the United Nations, Antonio Guterres.”

The reescalation of the eastern Mediterranean conflict also reflects Erdogan’s defiance of international institutions and the Geneva agreement. Turkey has resumed its seismic research activities in the contested waters in the eastern Mediterranean. The risk of a military confrontation between Turkey and Greece was believed to be averted by the withdrawal of the Turkish seismic research vessel Oruc Reis on Sept. 12 and the start of exploratory talks between Ankara and Athens.

However, Oruc Reis was sent back to the disputed maritime zone on Oct. 12, turning the de-escalation efforts by NATO and the EU, particularly Germany, back to square one.

As such, Erdogan confirmed my observation in the Al-Monitor article in September. “Erdogan’s decision to withdraw the Turkish ship from the conflicted area might only mark a respite until the end of the upcoming EU summit in a bid to dodge possible EU sanctions. … He is clearly timing his comeback rather than working for de-escalation and prioritizing diplomacy,” I wrote then.

That's what he did, indeed, and thereby rebuffed the hopeful statements of NATO Secretary-General Jens Stoltenberg about de-escalating tensions in the eastern Mediterranean. Stoltenberg has been seen as an appeaser of Turkey by the Greeks.

As long as Erdogan is deterred from taking a reckless course in his so-called assertive foreign policy and finds enough space to maneuver, he can get away by defying institutions like the UN, EU and even NATO.

He even dared to be in a spat with the United States. Despite US warnings to Turkey that Ankara risked seriously damaging its relationship with Washington, Turkey tested the S-400s. “They were tested, they’re being tested. America’s stance is absolutely not binding for us. We’re not going to ask America,” Erdogan said on Oct. 23.

Two days later, on Oct. 25, speaking in the eastern Anatolian town of Malatya at the local congress of his party, Erdogan went even further in his defiance. "The United States does not know who they are dealing with. Impose the sanctions already, whatever they may be," he said.

A day before, at another local party meeting in the central Anatolian province of Kayseri, he resorted to an unprecedented language vis-a-vis French President Emmanuel Macron. “What is the problem of this person called Macron with Muslims and Islam? Macron needs treatment on a mental level,” he said.

As a result, France called back its ambassador in Ankara. Erdogan accused Macron and the other European leaders of discriminating against the Muslims in Europe and of Islamophobia.

The question comes back: How come Erdogan can defy almost all the international institutions and big powers in the world simultaneously? How come he dares to fight on multiple fronts and get away with it?

The question is even more valid regarding Turkey’s involvement most recently in the war in the South Caucasus, which is considered Russia’s backyard. Turkey is the only country rejecting the cease-fire efforts of the OSCE’s Minsk Group co-chaired by Russia, the United States and France in the war between Armenia and Azerbaijan.

Turkey’s effective military assistance played a big part in the Azerbaijani successes on the ground and changed the balance of power in the conflict. And this provides an explanation to the above to some extent. The rest of the answer lies in Erdogan's personal ties with Putin.

Although Turkey and Russia’s positions on the Nagorno-Karabakh conflict differ drastically, Russian leader Vladimir Putin sounded very lenient to Erdogan in his statement about Turkey's role in the clashes.

Speaking at the annual Valdai Discussion Club Oct. 23, he said, “Our cooperation with Turkey is expanding. Turkey is our neighbor, and I can tell you in more detail how important interaction between our states is for both Turkey and Russia. … No matter how tough President Erdogan’s stance may look, I know that he is a flexible person, and finding a common language with him is possible.”

Putin conceded the differences Russia has with Turkey by saying, “Well, we do not see eye to eye on all subjects. For example, we are not always on the same page regarding the situation in the South Caucasus.” Yet he, nevertheless, took a defensive stand on Erdogan and said, “So why point the finger at Erdogan? … What should we do? When positions diverge, we look for compromise.”

Putin has learned the ways of communicating with Erdogan in time. On Oct. 26, Russian airplanes bombed a training camp of Faylaq al-Sham, a rebel group sponsored by Turkey in Idlib province of northwestern Syria, inflicting many casualties and killing around 80 people. It can be interpreted as an indirect Russian warning to Turkey about Ankara’s stance on the South Caucasus.

Turkey’s Western allies do not know how to communicate with Erdogan. The disunity within the EU, the inertia among the EU ranks, the US' preoccupation with the coronavirus pandemic and the upcoming elections have held Western powers short of showing a united front against Turkey.

Unless they change their discourse vis-a-vis Erdogan drastically, Erdogan will get away with spoiling cease-fire agreements from North Africa to the South Caucasus. He will be able to fight on multiple fronts simultaneously.