Will Russia and Turkey withdraw their proxies from Libya?

The UN delivers a potentially game-changing win for diplomacy, but the United States wants Russian and Turkish mercenaries out of Libya. 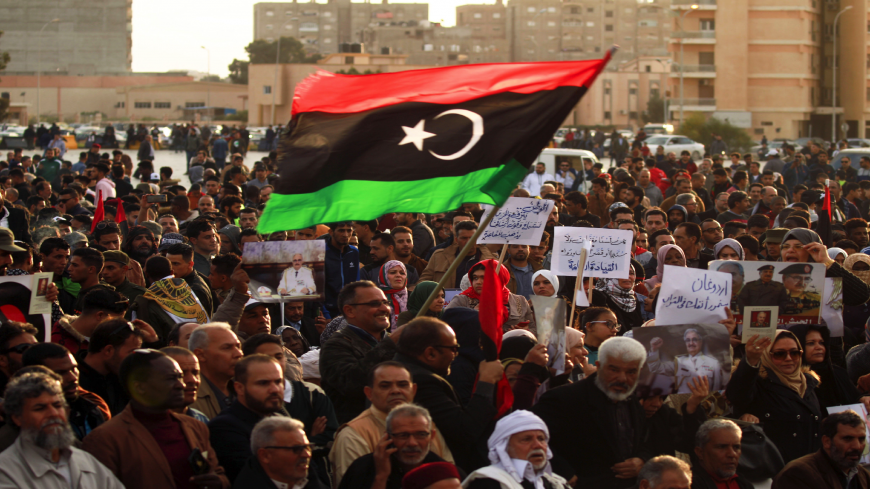 Supporters of Libyan military strongman Khalifa Hifter wave a national flag as they take part in a demonstration in the coastal city of Benghazi in eastern Libya against Turkish intervention in the country's affairs on Feb. 14, 2020. - ABDULLAH DOMA/AFP via Getty Images

‘Critical step’ at beginning of ‘long road’ in Libya

Much attention this week has been focused on the Biden administration’s jump-start to diplomacy to end the war in Yemen, which the UN has tagged the world’s worst humanitarian crisis, as we report here.

But there is perhaps even better news in the region’s other major conflict zone, Libya.

Having been ripped apart by civil war for nearly 10 years since a NATO-backed uprising overthrew former dictator Moammar Gadhafi in 2011, the country seemed fated to be a perpetual failed state.

Now, thanks to UN-mediated diplomacy, the Libyan Political Dialogue Forum, with 75 representatives from the country’s warring political factions, agreed last week on a "unified executive authority" and new interim president and prime minister.

The main protagonists in the conflict are the UN-recognized Government of National Accord (GNA), based in the capital, Tripoli, and the Libyan National Army (LNA), based in the country’s west and led by retired Libyan Gen. Khalifa Hifter — and both sides are on board with the agreement.

A joint statement by France, Germany, Italy, the United Kingdom and the United States praised the agreement as a "critical step," while noting a "long road ahead." The unified executive authority will now have to "implement the cease-fire agreement, provide essential public services to the Libyan people, initiate a program for meaningful reconciliation, address critical national budget needs and organize national elections" scheduled for December.

That to-do list for interim Prime Minister Abdul Hamid Mohammed Dbeibah would be daunting for the most stable of governments, let alone one that is just coming together following a decadelong conflict.

Libya’s success will depend on the buy-in of those outside powers who have backed one side or the other for the UN-brokered process, including Turkey and Russia (see below). Otherwise, Libya doesn’t stand a chance.

The change for Libya began in October 2020 when Stephanie Williams, Acting UN Special Representative of the Secretary-General (SRSG) and Head of the UN Support Mission in Libya (UNSMIL), an American, brokered a cease-fire that eluded her predecessors (Jan Kubis replaced Williams as UNSMIL head on Feb. 5).

The cease-fire depended then, as now, on the buy-in of outside powers who have taken sides in the conflict — including and especially Egypt, Qatar, Turkey and Russia.

The GNA, which has a Muslim Brotherhood-friendly bent, has been backed by Turkey and Qatar; Hifter had the support of Egypt, France, the United Arab Emirates and Russia. The United States has not really taken sides and has instead been a champion of Williams’ diplomacy.

The key outside powers, although surprised by the names on the winning slate, have been encouraging. The roster for the interim government had something for all parties.

Egypt has been a strong proponent of the UN cease-fire and negotiations, as Motaz Zahran, Egypt’s ambassador to the US, told Al-Monitor this month. The GCC summit in January, which began the process of reconciliation with Qatar, will likely have a positive spillover effect on Libya as it edges the GCC toward coordination rather than conflict in regional affairs.

Russia and Turkey supported opposite sides in the war and want to retain influence not only during the interim process but in the government that is formed after elections in December. And both want permanent bases in Libya.

The signs are promising so far, but an early test will be whether Turkey and Russia will draw down their proxy forces, including veteran jihadists from the Syria war (flown in by Turkey in support of the GNA) and Russian Wagner Group paramilitary forces (backing the LNA).

On Jan. 28, Richard Mills, acting permanent representative of the United States to the UN, called on "Russia, Turkey and the UAE to respect Libyan sovereignty and immediately cease all military intervention in Libya," and then he singled out "Turkey and Russia to immediately initiate the withdrawal of their forces from the country and the removal of the foreign mercenaries and military proxies."

Turkey, like Russia, is so far content with the unified executive authority. Dbeibah is "an entrepreneur with business ties in Turkey dating back to the Gadhafi era," writes Fehim Tastekin. “In his first statement to Turkey’s Anatolia news agency, he pledged "great solidarity with the Turkish people and state" and described Turkey as "our real partner."

Mustafa Fetouri also recalls that the GNA’s decision in 2019 to recognize Turkey’s claims in a boundary demarcation dispute with Egypt, France and the European Union is "vital for Turkey’s strategy in the Eastern Mediterranean," adding that "Ankara would reject any new executive authority in Libya if it sensed that such a new government might annul its security memorandum and maritime deals that were previously signed with the GNA."

But there are also reasons for Ankara to hedge. Dbeibah and those in the interim authority are in the end only placeholders. "In other words," explains Tastekin, "Turkey’s rivals in Libya are gradually repositioning themselves in a bid to gain influence over Tripoli. The cease-fire line may be drawn at Sirte and al-Jufra, but the political front lines are now moving to Tripoli, meaning that Turkey’s coordination of its already sparring partners there will become even more difficult. Meanwhile, neither Turkey’s allies nor their eastern opponents appear ready to forfeit their foreign backers. Eventually, both sides might refrain from pushing for the withdrawal of foreign forces as the Oct. 23 cease-fire deal requires."

Similarly, "It cannot be ruled out that Russia would like to create its own permanent military bases in Libya, primarily where Russian mercenaries are already present," writes Kirill Semenov. "A naval base could be created in Sirte, or an air force installation in Jufra. The problem is that Sirte is named as the city planned to house the new authorities — the GNA and the Presidential Council — and the city itself should be demilitarized. The withdrawal of mercenaries is the first stage of this process. …"

"A possible option … could be the deployment of an official Russian mission of the Ministry of Defense at these bases, which could assist the new Libyan authorities in creating a unified armed force, and Russian mercenaries could be withdrawn from the country," adds Semenov.

Despite their differences, "Russia and Turkey could probably reach a mutual understanding," Semenov concludes, in opposition to US interests to keep foreign forces out of Libya.

Picking up the pieces of a broken state

As many as 43,000 have been killed since the start of the civil war, but that’s just the start of the damage to Libya over the past decade. In the World Bank classification of states in fragile and conflict-affected situations, Libya falls into the top, high "intensity" conflict category, meaning those with the greatest likelihood to experience chronic poverty (the other states in this group include Afghanistan, Central African Republic, Somalia, South Sudan, Syria and Yemen).

Of Libya’s 7 million people, 392,000 are displaced and 1 million are in need of assistance. Over 2,100 have so far died from COVID-19 in a country whose health system is in disrepair and where water and electricity are sometimes unavailable for up to 18 hours a day, according to the UN.

The uptick in the war in 2019 slowed and reversed the prospects for economic growth, a crisis compounded by COVID-19 and low oil prices. The gross domestic product fell by 66.7% in 2020, according to the International Monetary Fund. The good news is that Libya has the most oil reserves in Africa. And since the cease-fire in October, production has been inching back up to about 1.2 million bpd (substantially higher than last year, but below the pre-2011 production of 1.5-1.6 million bpd).

The crucial point today, however, is that Libya stands a chance. The interim Libyan authorities have their hands full, but there is a process, a new start and some real hope for the beginning of the long road to ending a war.