25 years after the assassination of Prime Minister Yitzhak Rabin, Israeli society is divided more than ever and incitement is reaching new heights. 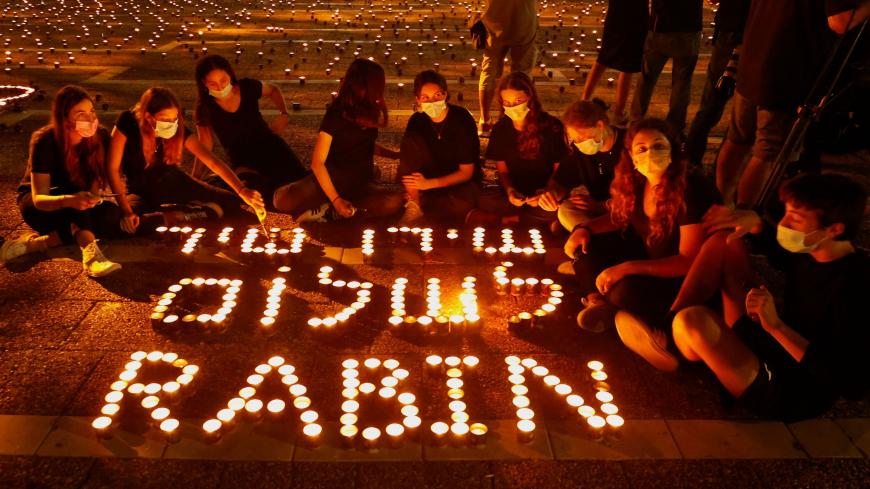 Israelis light 25,000 candles at Rabin Square in the Israeli coastal city Tel Aviv, on Oct. 29, 2020, ahead of the 25th anniversary of the assassination of former Israeli Prime Minister Yitzhak Rabin. - JACK GUEZ/AFP via Getty Images

Three bullets struck Prime Minister Yitzhak Rabin on the 12th day of the Hebrew month of Heshvan, 25 years ago today. Two pierced his back as he walked toward his armored car following a peace rally in Tel Aviv’s central square. The ensuing hour was among the most dramatic in the history of the state. As Rabin was rushed to a hospital in critical condition, Israelis hoped for two things: that he would survive and that the shooter was not Jewish. Both hopes were dashed.

When the assassin’s name, Yigal Amir, was made public two hours later, then-opposition leader Benjamin Netanyahu dispatched his close aide, Avigdor Liberman, to the Likud headquarters in Tel Aviv to check the membership lists for any signs of affiliation with Amir. The hour it took Liberman to drive from Jerusalem to Tel Aviv was one of the tensest in Netanyahu’s political career. He knew that if Amir turned out to be a card-carrying Likudnik, he could pack his bag and disappear into the scrapyard of history. Luckily for him, Amir was not. He was a brainwashed religious ultra-nationalist who believed that killing Rabin would also bury the peace process with the Palestinians and save the people of Israel from the catastrophic consequences he believed would follow. He continues to hold that belief behind bars.

Amir was one of the most effective political assassins in modern history. With Rabin murdered and his successor Shimon Peres losing the elections six months later to Netanyahu, the Oslo process collapsed and Israel veered to the right, where it remains a quarter-century on.

As Israel marked Rabin Memorial Day, Netanyahu no longer bothered with any pretense. From the Knesset podium he mounted to commemorate Rabin, he complained that no one was raising the alarm against the incitement directed at himself and his family.

As always with Netanyahu, it was all about him. He has never apologized for the right-wing incitement by the Likud and other parties that led to the Rabin assassination. On the contrary, he has denied all involvement, even though he was officially warned by then-head of the Shin Bet Carmi Gilon about the violent potential of the incitement by Likud activists against the prime minister, as did, repeatedly, one of his closest aides at the time. With Netanyahu, the end always justifies the means, and when things go wrong, he simply denies any involvement.

“These days are reminiscent of the days before the Rabin murder,” a senior police official told Al-Monitor on condition of anonymity. “The hatred and division we are seeing on the streets are even greater than they were then.” The alarm bells warning of another political assassination are ringing. Likud activists are walking around with T-shirts emblazoned with the words “Leftists are Traitors.” The prime minister’s son Yair tweets incessant invective against the attorney general, whom he has accused of posing an existential threat to the state. He had added “almost as bad as Iran” but then deleted the words.

Netanyahu himself is mum, not deigning to say anything that would douse the flames. On the contrary, he keeps carping about being framed by police and prosecutors intent on unseating him, painting himself as a messiah sent to deliver his people only to encounter leftist supervillains and dark plots designed to remove him from power. Unfortunately, this pile of used goods has many buyers who believe every word.

On the eve of the Rabin assassination, Israelis were divided between left and right. On the left were supporters of Rabin and of the Oslo peace process he led. On the right were Rabin’s opponents, who viewed the planned handover of territory to the Palestinians as an unforgiveable sin against the biblical god who had entrusted it to his people. The atmosphere was charged, but most Israelis were unsure, torn between the two polar views.

In this sense, the current climate is far worse. The process of internal disintegration has greatly accelerated. The dichotomy is no longer between left and right but between those who despise Netanyahu and those who adore him. Half the Israeli public is behind him, ignoring the clamoring of the other half and swearing by his every move. The other sees him as a destructive force, a real existential threat to Israel’s future and original raison d’etre. Neither side is willing to budge. The combination of this intransigence with the bitter incitement by Netanyahu and his associates against law enforcement authorities and his opponents, mixed with the deep economic crisis and the continuing countrywide protests packs is primed to explode. All that is needed is a spark.

The onus of heading off the explosion is on the Israeli police, hobbled by shortages in budgets and personnel. Netanyahu, through one of his closest allies, Public Security Minister Amir Ohana, is preventing the appointment of a police commissioner. An interim police chief has been running the show for almost two years, making it harder for officers to make independent decisions. Police officers are sent almost nightly to protect anti-Netanyahu protesters from pro-Netanyahu threats and to maintain public order, but they often find themselves lacking direction.

The anti-Netanyahu slogan “Go” continues to fuel protests around the country, with small groups of pro-Netanyahu counter-protesters trying to challenge them. Most of the violence originates with the prime minister's followers — attempts to run over demonstrators, tear gas and pepper spray, stone throwing and occasional fistfights. The air is suffused with combustible fumes, just waiting for someone to throw a match.

Is another political assassination in the cards? True, the glue binding the various tribes of Israeli society into one nation no longer holds as it once did, but that does not mean the damage is irreversible.

Netanyahu himself is well protected with beefed up security, a lesson of the Rabin assassination. The greatest threat lies in the street demonstrations or within law enforcement. Netanyahu is not the most threatened Israeli figure these days. That dubious honor goes to Attorney General Avichai Mandelblit, who has indicted Netanyahu on three charges of corruption. The chances of someone trying to harm him or the prosecutor in the cases against Netanyahu or simply targeting a protester are increasing. The slope on which Israel finds itself is more slippery than ever and the brakes are giving out. Nonetheless, it is too soon to give up on Israeli society, which has managed to emerge strengthened from previous crises. One can but hope for a responsible adult to step forward and help it extricate itself once again.