Supporters of Prime Minister Benjamin Netanyahu increase their campaign against the legal system, Attorney General Avichai Mandeblit and the courts. 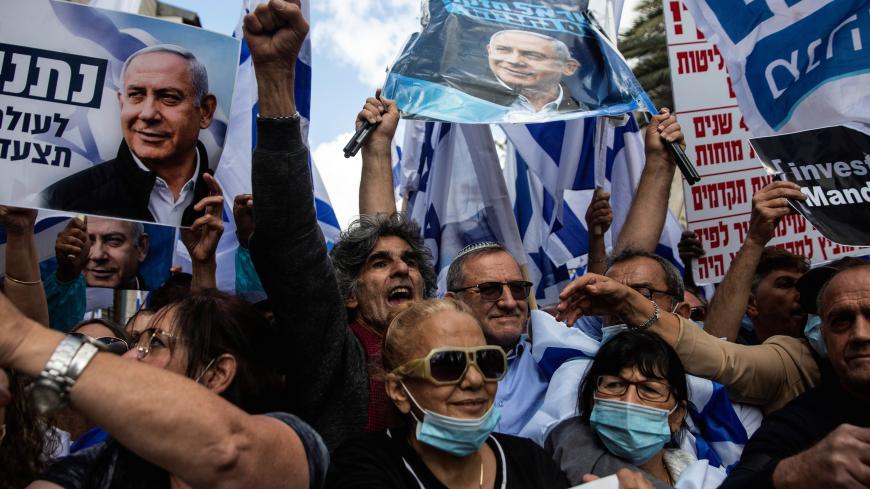 Supporters of Israeli Prime Minister Benjamin Netanyahu take part in a protest outside the prime minister's residence, on the day when Netanyahu's corruption trial starts, in Jerusalem, May 24, 2020. - Heidi levine/Pool via REUTERS

No one really fell off their chair when it happened. The writing had been on the wall, the plans were in place and the marching orders had been given. On June 13, one of Prime Minister Benjamin Netanyahu’s most ardent fans, journalist Boaz Golan, tweeted, “The indictment against Netanyahu is illegal because the person who filed it was picked for his job through subterfuge and in violation of the law. In any properly functioning country, such an indictment would have been annulled.” That “person” was Attorney General Avichai Mandelblit.

This first expected harbinger of spring signaled what many view, in fact, as a dark winter. The tweet opened the floodgates. Al-Monitor asked Knesset member Miki Zohar of the Likud party, the chair of the government coalition and the lawmaker closest to the prime minister, whether he too believes that the state should cancel the indictment against Netanyahu due to the cloud allegedly hanging over Mandelblit’s head. “The indictment must be annulled. There’s no doubt,” Zohar responded without missing a beat. There you have it — the cat is out of the bag. The ongoing campaign by Netanyahu’s supporters delegitimizing Israel’s entire law enforcement system has reached its decisive moment.

Before proceeding, let's make clear that no serious cloud hangs over the head of the attorney general. Journalists partial to Netanyahu have invested mammoth efforts in recent months in undermining Mandelblit’s credibility. Ignoring the fact that Netanyahu handpicked Mandelblit, personally, they now claim the appointment was tainted by lies and fraud. The fact that the man who appointed Mandelblit and who runs the country is himself standing criminal trial does not trouble them. They are focusing on the long-forgotten appointment and vetting procedures, which Mandelblit passed with flying colors and which Netanyahu signed and sealed.

Mandelblit was one of Netanyahu’s most trusted associates, his Cabinet secretary and a senior member of his inner sanctum. To undermine his 2016 appointment, Netanyahu’s followers have dusted off an obscure affair dating to Maj. Gen. (Res.) Mandelblit’s tenure as military advocate general, but without much success. The “exposes” published in recent months failed to come up with significant findings. The so-called Harpaz affair involved a faked 2010 document, with allegations surfacing that Mandelblit was aware of its existence and helped top army brass hinder the probe into its provenance. At the time, the allegations were examined ad nauseam, the Supreme Court cleared him of any wrongdoing and attempts to question the legality of his appointment failed.

The facts, however, did not confuse the pro-Netanyahu camp, and the attacks against Mandelblit have escalated into what is now a public call to rescind the Netanyahu indictment filed by an attorney general whose appointment was (allegedly) tainted. The whole move is obvious and frighteningly absurd: The fake “exposes,” the orchestrated reactions that followed and the intense seriousness with which the prime minister’s acolytes are trying to undermine the appointment he himself made in order to get the indictment against him thrown out.

The onslaught on Mandelblit actually originated in late 2016 in the anti-Netanyahu camp, with regular, persistent protests by left-wing activists demanding that the attorney general order a probe into the prime minister’s suspected wrongdoing and accusing Mandelblit of ulterior motives for granting favorable treatment to a prime suspect. Mandelblit, who eventually indicted Netanyahu on Jan. 28, now misses those (relatively) tame protesters as he contends with an uncontrollable and unbelievable witch hunt in the media and on social media. The prime minister’s son, Yair Netanyahu, is orchestrating the campaign that portrays the attorney general that his father appointed as a Don Corleone clone. Some right-wing WhatsApp groups feature photoshopped pictures of Mandeblit resembling a menacing satanic figure.

The Netanyahu salvation campaign is now on its final and decisive leg: The target this time is the judges. The initial targets in the ongoing pro-Netanyahu campaign were the police officers and investigators, and subsequently the top brass of the Israeli Police and Commissioner Roni Alsheikh — another Netanyahu appointee. Next in line was Special Prosecutor Liat Ben-Ari who handles the Netanyahu case, then her fellow prosecutors and chief State Prosecutor Shai Nitzan. Mandelblit was the next stop. Now that the chain of investigation and prosecution has been dealt with, it is time to tackle the courts and the judges.

Two Supreme Court justices — Anat Baron and Uzi Fogelman — have been placed under close protection after receiving threats in recent weeks described as particularly harsh and violent. Fogelman found his home mailbox and door plastered with stickers saying, “Jewish blood isn’t cheap,” an apparent reference to a recent ruling he handed down with Baron rejecting the state’s petition to demolish the home of a Palestinian assailant.

As police launched an investigation, an anti-immigrant activist from Tel Aviv came forward and admitted to placing the stickers against Fogelman, whom she blames for pro-immigrant rulings. Police are still investigating, but there is no doubt that persistent fierce, vulgar attacks on judges by pro-Netanyahu tweeters and internet bots have laid the groundwork for such threats. This “ideological” campaign is being spread through numerous pro-Netanyahu WhatsApp groups, calling judges “traitors” and “descendants of Nazis,” and accusing them of “aspiring to annihilate the Jewish state.”

Law enforcement authorities hold Netanyahu ultimately responsible as the main perpetrator of the delegitimization campaign against the system. Netanyahu himself arrived at the Jerusalem District Court for the May 24 opening of his trial flanked by Likud party Knesset members and government ministers expressing their solidarity as he delivered a scathing diatribe against law enforcement authorities in the best Dreyfus tradition.

Netanyahu does not appear perturbed by accusations of his culpability for the threatening climate. While his people were “dealing” with the judiciary — even as he stands before the court — Netanyahu was engineering a coalition crisis with his former rival-turned partner Defense Minister Benny Gantz over the issue of the Supreme Court’s authority. Specifically, Netanyahu is now demanding that Gantz promise to support legislation overriding Supreme Court rulings in case the top court disqualifies him from serving as “alternate prime minister” in late 2021 once he switches place with Gantz under their power-sharing agreement. After some hesitation, Gantz gave in, handing Netanyahu yet another knockout.

But while Netanyahu defeated Gantz in battle, he will be mired in legal war for many years to come in the Jerusalem District Court. Given current developments, security agencies will soon have to provide the judges with the same level of protection they provide the prime minister. Netanyahu does not really care. He is waging a trench war, leaving behind scorched earth.