The perfect storm is approaching: Not only will Attorney General Avichai Mandelblit decide soon whether or not to indict Prime Minister Benjamin Netanyahu, leaks from police questioning of Yair Netanyahu make the picture even darker. 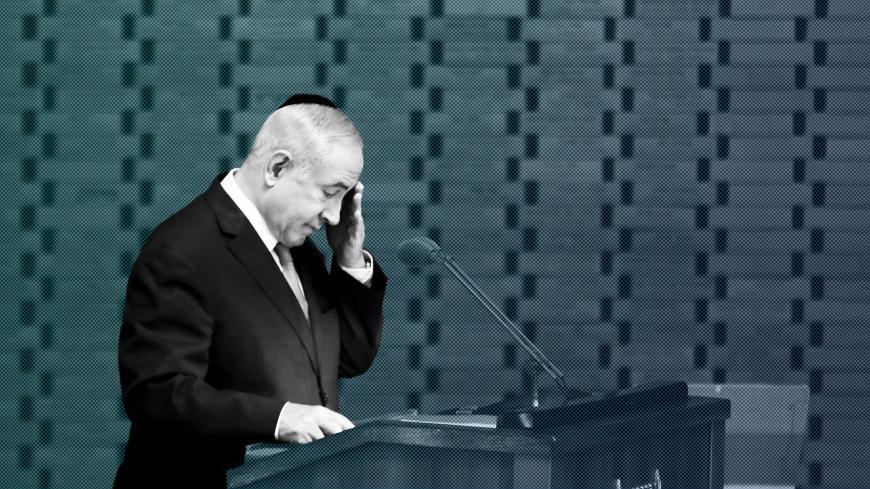 The all-out war being waged these days by Prime Minister Benjamin Netanyahu and his political messengers and Israel’s law enforcement authorities exceeds all expectations and the most daring scenarios imagined in recent months.

The issue is not only the justice minister’s unprecedented broadside against the country’s law enforcement system. The minister, Amir Ohana, a surprising, puzzling personal appointment by Netanyahu to his transition government, is particularly close to the prime minister’s son, Yair Netanyahu. In his Oct. 29 attack, Ohana did not merely criticize the system under his tutelage, he set out to crush it. Never has an Israeli government minister lashed out with such ferocity against a department and officials under his responsibility, including personal attacks and undermining credibility and motivations in an attempt to call into question the legitimacy of one of the country’s most important systems of governance. This week’s clash between the justice minister and law enforcement authorities brings to mind the war between President Donald Trump and the US legal and intelligence establishment, in Israeli dimensions, of course.

Ohana’s wild attack on the country’s law enforcement authorities, which he delivered in a specially convened news conference, astounded even top figures in his Likud party. Some of them kept silent, and didn’t back publicly his remarks. Others have expressed lukewarm and not particular committed support. Many of the party’s top echelons realize that the timing of the attack, its severity and the fact that the prime minister did not condemn it are instrumental in the attempts to torpedo the formation of a unity government comprised of the Likud and opposition Blue and White party.

The top echelons of Blue and White are equally pessimistic. “How can we establish a government with this gang?” asked one of the members of the party’s leaders, speaking on condition of anonymity to Al-Monitor. “Do you see us sitting in a government with a party trying to crush the rule of law in Israel?”

However, even Ohana’s broadside, which shocked the attorney general, senior state prosecutors and Supreme Court justices, is not the end of the story. Attorney General Avichai Mandelblit is in the midst of marathon discussions on whether to indict the incumbent prime minister for the first time in Israeli history and whether the corruption charges against him will include bribery. Mandelblit intends to push up the deadline for the decision, which was initially estimated to be made in the second half of December, and will make an effort to reach a decision by mid-November, meaning within two or three weeks, at most. In doing so, he hopes to ease the paralysis gripping the political system in a stalemate that could lead the country to a third consecutive election within less than a year.

Meanwhile, however, a new drama has emerged, powerful and frontal, between the attorney general, the prosecution and the police, and the Netanyahu family and its yes-people in the Likud: a police investigation of attempts to intimidate a key state witness against Netanyahu, his former confidant Shlomo Filber. It was this new investigation that generated Ohana’s urgent offensive against the legal system and the relatively large demonstration of Netanyahu supporters outside Mandelblit's home on Oct 29.

The police suspects that Netanyahu’s associates were behind the Likud campaign operation that sent a van equipped with loudspeakers to blast Filber’s house with hateful messages questioning his integrity and motivation in turning a state’s witness against Netanyahu. “Filber, what did they do to you that you lied about the prime minister?” the speakers thundered. “The left is using you to bring down the Likud.”

Filber’s testimony is key to proving the dramatic bribery suspicions against Netanyahu in what is known as Case 4000, alleging that Netanyahu, as minister of communications, facilitated regulatory favors for a media tycoon in return for favorable coverage of himself and his family. Filber served at the time as director of the ministry. After losing its key witness, Mickey Ganor, who backtracked on his testimony in the case known as Case 3000, the state prosecution does not intend to lose yet another central witness to its cases. Mandelblit himself was the one who asked police to investigate suspicions of witness tampering, considered an egregious offense in Israel’s criminal statutes.

Mandelblit, just like Filber, is affiliated with Israel’s national religious community and knows full well the potential impact of such intimidation on the witness’s state of mind vis-a-vis his milieu and peer groups (family, neighborhood, synagogue friends).

As part of the investigation, two of Netanyahu’s closest aides were questioned by the police: Jonathan Urich and Ofer Golan, two of the driving forces in the Likud campaign. Police also seized their cellphones and is awaiting court approval to examine their contents. These silenced devices, which are locked in safes pending next week’s hearing of an appeal to prevent the police from examining them, are a source of great concern to many people, possibly even members of the Netanyahu family. The question is who gave the order to harass Filber. If it turns out to be a member of the Netanyahu family, we can expect an additional, dramatic shocker, which could even be a game changer.

As aforementioned, the sides are now facing off on the question of the police’s right to conduct a “surgical examination” of the close aides’ cellphones. Until that standoff is resolved, within one or two weeks, Mandelblit is also expected to determine the fate of the central cases against the prime minister.

Meanwhile, to ensure there is never a dull moment, transcripts of Yair Netanyahu’s police testimony in Case 4000 — in which he is no longer a suspect — were leaked to the media. The transcripts set off a powerful storm when it transpired that Netanyahu junior was calling the police names such as “Gestapo” and “Stasi,” describing senior Likud members in gutter language and presenting a wild, unrestrained and uncontrollable personality.

At the same time, the deadline is nearing for Blue and White leader Benny Gantz’s attempts to form a government, while Israel is speedily heading for its third back-to-back elections for the first time in its history.

The timing of Mandelblit’s decision could coincide with the expiration of Gantz’s mandate (Gantz has 28 days to form a government) and its passing to the Knesset that will have 21 days to mobilize the support of 61 members for a new government. How would that affect developments? Will the Likud keep displaying total, blind loyalty to Netanyahu and his needs? Will such a move fan the winds of rebellion within the Likud and its affiliated religious and right-wing parties? We will only know the answers in real time.

Meanwhile, all that top Likud figures can do is to carp behind closed doors as they watch the dramas unfold, and privately admit that the prime minister’s war overshadows even their worst expectations. “He is leaving behind scorched earth,” a senior Likud figure told Al-Monitor this week on condition of anonymity. “No one dares raise their heads, we are all lining up alongside this jihad against the state’s institutions. I don’t know what we will tell our grandchildren about this period, and I am not sure the rubble can be rebuilt on the day after.”