How to protect judges who would preside in Netanyahu case

Prime Minister Benjamin Netanyahu has been loudly claiming that the police, the state prosecution and the attorney general have been persecuting him; he likely would try to undermine and even attack his judges if and when brought to trial. 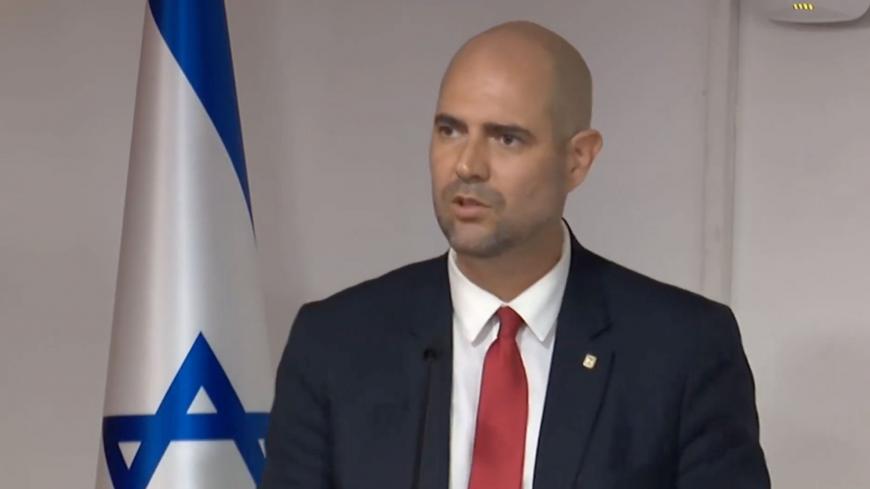 Israeli Justice Minister Amir Ohana gives a press conference about the Attorney General's office, seen in a still from a video recorded Oct. 29, 2019.

Justice Minister Amir Ohana lashed out Oct. 29 at the law enforcement system over the investigation into Prime Minister Benjamin Netanyahu, claiming there was a “prosecutor’s office within the state prosecutor’s office” designed to destroy the careers of certain politicians.

Ohana, who is serving in the transition government, showed no restraint whatsoever in his words. And yet, while he crossed every imaginable red line, it was hardly unexpected. It was obvious that at some stage or other, he would have to repay Prime Minister Benjamin Netanyahu for appointing Ohana to that lofty position (as minister in a transition government, Ohana can do little to nothing). Since Ohana has had very few opportunities to help Netanyahu until now, all that he could do was make a public appearance in order to brand the state prosecutor’s actions as illegitimate.

If Ohana had been someone with serious tenure in public service, and if he had established himself as someone for whom the cause of justice overrides all political considerations, the justice minister could have contributed more to the intense effort underway to ruin the reputation of law enforcement in Israel. Instead, Ohana was simply pathetic. It was so obvious that he wanted to return a favor to Netanyahu. After all, his appointment came as a surprise even to him (and only after others rejected the offer). He did not believe that he was a rising star in the party, or that, as a relatively obscure Likud backbencher in the Knesset, he would be promoted to such a high position. The effort by the provisional minister to say there is an unidentified, “internal voice” within the state prosecutor’s office who is conspiring with the media to overthrow the country's leader — likening the process to extortion — was lightweight. One can hardly take seriously such grave claims coming from a junior politician.

In fact, it is hard to imagine that anyone believed his accusations against the most senior staff of the Justice Ministry or thought that there was cause to investigate. Ohana didn’t even suggest any practical measures, apart from the idea that the attorneys be subjected to a polygraph test, or that they hand their cellphones over so that they can be checked, as if they were real suspects. From Ohana’s point of view, all he had to do was appear, like no minister before him had done, to offer his critique of the justice system. By doing so, he fulfilled his obligation of coming out against the system that dared to suspect Netanyahu in the first place.

Nevertheless, Ohana’s pathetic behavior should deceive no one. The prime minister has been following the legal process against him and responding with meticulous order. At first, he fired his cannons off against the police investigators. Using the somewhat shallow slogan “There won’t be anything because there was nothing,” Netanyahu lashed out at the Israel Police and their Commissioner Roni Alsheikh, whom he appointed to the position in the first place. The prime minister accused them of attacking him and his family, while trying to play down the conclusions of the investigation. From the very beginning, Netanyahu said the police would recommend that he stand trial, even though the state prosecutor frequently rejects recommendations to make suspects stand trial. The conclusion Netanyahu drew from this is that any recommendations made by the police are meaningless, no matter what they are. He then broke off all ties with Alsheikh and blocked a one-year extension of Alsheikh's term. When the police made their recommendations (to indict Netanyahu for bribery in Cases 1000, 2000 and 4000), Netanyahu gave the impression that it was barely a slap on the wrist as far as he was concerned. When Attorney General Avichai Mandelblit removed the charges of bribery from the first two cases, leaving it only in the third (Case 4000), Netanyahu shared his belief with the public that the cases against him were all fabricated, citing this as further evidence that the police and their recommendations were irrelevant.

For a short time, people around Netanyahu tried to create the impression that he believes that the public prosecutor has a much broader perspective than the police. Once the articles of the indictment were revealed, however, shortly before the election for the 21st Knesset in April, the attorneys in the prosecutor’s office became a legitimate target for attack. The main argument was that there is a “deep state” in Israel, controlled by the media and the left, and that since the deep state realizes it will never be able to defeat Netanyahu at the ballot box, it will try to depose him using legal means, including accusations that are entirely made up, such as receiving cigars and champagne as gifts or getting flattering press coverage from friends. In doing this, the prime minister created the impression that he could expect nothing from the attorney general or the state prosecutor, which is why he almost decided not to send his legal representation to a hearing that took place right after the election for the 22nd Knesset in September.

Netanyahu also made an effort to distinguish between his former confidant Avichai Mandelblit, who was appointed (mainly by Netanyahu) to serve as attorney general, and state prosecutor Shai Nitzan. The prime minister was perhaps hoping that Mandelblit would remember the good old days, preferring not to become the first Israeli attorney general to sign an indictment against a serving prime minister. And so, Nitzan was quickly designated (by Netanyahu’s associates) as an “enemy of the people,” while Mandelblit benefits from the doubt, so far. This will not last long, however. Once there is an indictment, the attorney general will be put in the same box as the state prosecutor.

The main effort of Netanyahu’s entourage already targets the legal system. There are even some who argue that Netanyahu cannot receive a fair trial because his case has already been tried in the public square, and that even if the judges are convinced that “nothing happened,” they would not dare violate the order of the “deep state” to find the prime minister guilty.

As soon as the names of the three Jerusalem District Court judges who would preside over Netanyahu’s case are released (if and when the attorney general decides to indict), they will become targets for derision and disparagement. All of their past rulings will be investigated to see if any of them were overruled or rejected by a higher court, etc. The next goal will be to say that the district court is not a major link in the justice system at large, and that there can be no doubt that the Supreme Court will overturn its decision, because it will finally realize that there is nothing — because there was nothing. After all, this ("there will be nothing, since there is nothing’’) has been Netanyahu’s mantra ever since the beginning of the investigations.

However, this is a very sensitive period, because the end is near. It is therefore necessary to prepare accordingly. My recommendation is: Don’t wait until the last minute. Don’t wait for some extraordinary incident to occur. Provide security for the three judges who will rule on the prime minister’s case as soon as their identities are made public.