Should Netanyahu be indicted in court or at the ballot box? 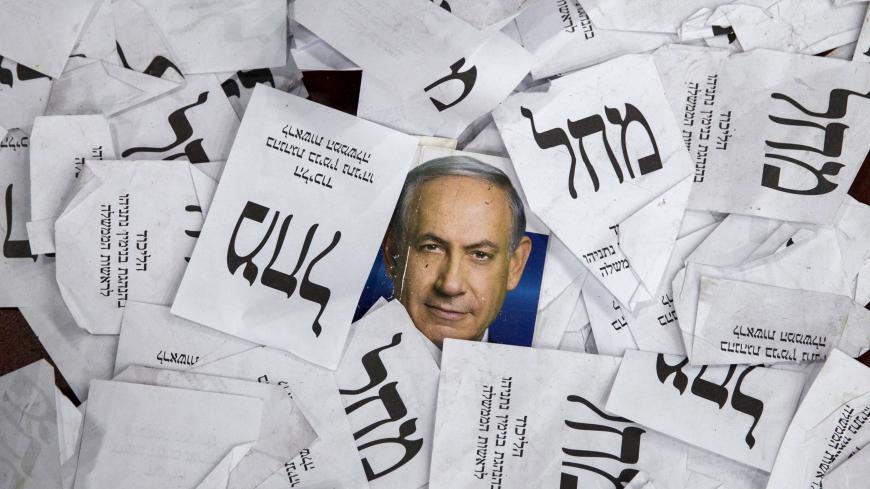 “You don’t start a hearing before the elections unless you can finish it before the elections,” Prime Minister Benjamin Netanyahu wrote on his Facebook page Jan. 6, referring to the possibility that Attorney General Avichai Mandelblit may decide to indict him on criminal charges, pending a hearing, prior to the April 9 elections. “Under no circumstances can the public hear the claims of one side and not the answers of the other!” Netanyahu wrote. Netanyahu’s argument has subsumed the political agenda, pushing aside his government’s status quo policy and creeping annexation of the occupied territories, which are turning Israel into an apartheid state. The right of the privileged Netanyahu to be presumed innocent until proven guilty dominates the public agenda at the expense of essential issues such as the rights of oppressed minorities in Israel and the occupied territories.

Indeed, Israel’s citizens should not go to the polls on April 9 armed only with one side’s claims, meaning an indictment of the candidate for prime minister. Who knows? Perhaps after hearing the arguments presented by Netanyahu’s high-priced lawyers, Mandelblit will decide to bin the police findings in the three criminal cases against Netanyahu, known as files 1000, 2000 and 4000. Netanyahu’s attorneys may come up with surprising arguments, which police investigators had not heard before from the prime minister himself when he found time to host them at his official residence (unlike run-of-the-mill suspects who are summoned for questioning to a police station or detention facility). However, according to Netanyahu, the truth will only emerge after the horses are long gone from the stable, meaning after April 9.

But the truth is that Netanyahu got to lay out his arguments not only before Mandelblit and the State Prosecutor’s team monitoring the investigations, but also before much larger forums. Contrary to Netanyahu’s indignant claim that voters must not be allowed to go to the polls with only one side of the story, the public is exposed incessantly to Netanyahu’s claims. For example, several hours after complaining on Facebook that his side of the story was being ignored, Netanyahu used subterfuge to take control of the country’s television and radio stations, online news sites and social media. On Jan. 7, under the guise of delivering a “dramatic announcement” on prime time, Netanyahu laid out his version of the corruption affairs for 15 full minutes.

For example, Netanyahu “revealed” to the public why law enforcement authorities were (allegedly) refusing his demand to confront his former aides who have turned state’s witness: because they (law enforcement authorities) support the division of Jerusalem between Israelis and Palestinians and Israel’s withdrawal to its 1967 borders. If he were to propose giving part of Jerusalem to the Palestinians and pulling back to the '67 borders, sacrificing Israel’s security, “this terrible hunt against me and my family” would have stopped, Netanyahu said. An experienced and seasoned politician like Netanyahu had obviously realized that even a restrained jurist such as Mandelblit would not remain indifferent to severe accusations of being a pawn in the hands of the radical left. Mandelblit will respond, Netanyahu will accuse, the media will attack and Netanyahu will depict himself as the victim in the affair.

Netanyahu was bang on. Mandelblit spoke up. In his usual, cautious manner, the AG told a Hadashot News TV reporter in a profile aired Jan. 19, “I am a professional. I work according to evidence and that’s all. The attacks cannot be allowed to influence and they will not influence.” Mandelblit then added, “In a democratic state, the rule of law is the same for everyone — from the simple man and up to the prime minister.”

Netanyahu’s reaction, as anticipated, was not long coming. Mandelblit’s “cooperation” with the TV program even as he was preparing to make a decision about indicting the prime minister “is unprecedented in the annals of the Israeli judiciary and raises serious questions,” the victimized Netanyahu whined.

He is quite right. However, this precedent isn’t the only exception to take place. Never in the annals of Israeli jurisprudence, and perhaps in the annals of all enlightened democracies (other than the Trump-era United States), has there been a leader like Netanyahu, who has taken advantage of social media and the public platforms at his disposal to conduct a campaign, de-legitimizing law enforcement authorities and undermining the democratic checks and balances and civil society.

More so. Netanyahu’s onslaught against Mandelblit was preceded by his attack on former Police Commissioner Roni Alsheikh at the end of his term last year, saying his successor “would have a major job of rehabilitation.” In July 2017, Netanyahu castigated State Comptroller Joseph Shapira for supposedly spreading fake news after he criticized the prime minister over alleged conflict of interest in the Bezeq-Yes telecom regulatory affair. Before that, responding to a February 2017 oversight report by Shapira about flaws in the security Cabinet’s performance during the 2014 war with Gaza, Netanyahu struck the government watchdog below the belt. “Unlike the comptroller’s report, I back the heads of the military, the Shin Bet security agency and the defense system,” he said.

The three “hunters” persecuting the prime minister and his family — Mandelblit, Alsheikh and Shapira — have something in common. Netanyahu himself handpicked and appointed them. The same goes for the three state’s witnesses — Shlomo Filber, Ari Harow and Nir Hefetz — who have supplied police and the prosecution with damming documents and recordings.

This raises three disturbing possibilities, any of which should worry Israeli citizens. One is that all six senior figures, as well as dozens of police investigators and state prosecutors who have recommended indicting Netanyahu, plotted with the political left to stage a coup. The second, no less disturbing possibility is that Israel has been led for the past decade by a man with limited ability to pick the country’s top guardians and his closest confidantes. The third possibility is that the prime minister is a truly corrupt person.

Some claim that Netanyahu’s actions do not verge on criminality and should be judged at the ballot box. Noted American-Jewish attorney Alan Dershowitz is among them. In a an article published in December then translated and posted on Netanyahu’s Facebook page on Jan. 17, Dershowitz argues that accepting gifts and positive media coverage are not criminal offenses, ignoring the fact that the recommendations by police and the prosecution indicate that Netanyahu asked for the gifts and exerted pressure to obtain favorable coverage. Dershowitz calls for a halt to the criminal proceedings against Netanyahu and urges he be allowed to devote his great skills to deal with the major challenges facing Israel. Netanyahu knows how to deal with such public pressure.

As aforementioned, the intense public debate about Netanyahu’s (impending) criminal indictment has swept under the carpet all discussion of the political-defense-economic indictment that voters should hand down on April 9, without the need for a pre-indictment hearing. That indictment would say that if Israel keeps adhering to the status quo instead of moving forward with the two-state solution based on the 1967 borders and agreed land swaps, it will have to choose between its Jewish and democratic identity.

The leftists allegedly breathing down Mandelblit’s neck did not articulate that choice. The speaker, in a 2014 interview with the monthly publication of the Israel Bar Association, was none other than Netanyahu’s No. 1 fan and the leading pro-Israel advocate in the world: Alan Dershowitz.