Members of Beitar Jerusalem soccer team fan club La Familia are now demonstrating against anti-Netanyahu demonstrators and even chasing them away. 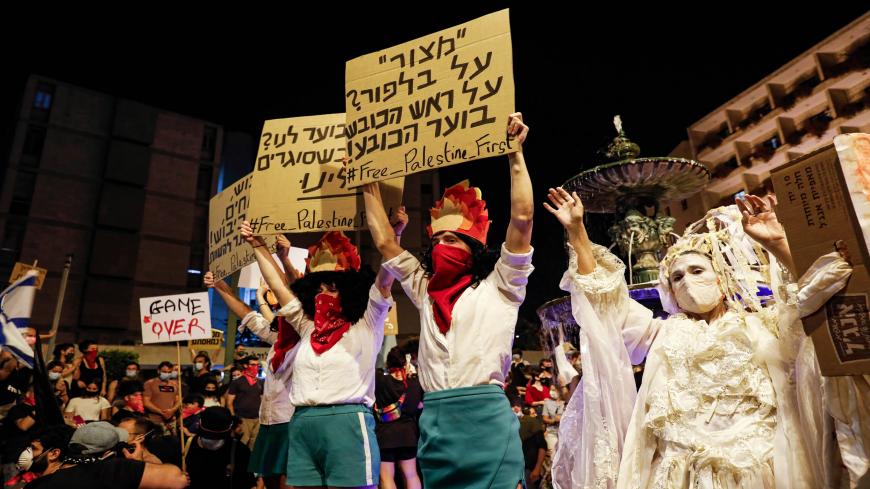 A protester wearing a bandana stands with others holding up a sign (R) reading in Hebrew "Siege on Balfour," in reference to the street where the Israeli prime minister's residence is located, and "On the head of the thief the hat burns" (proverb), during a demonstration against the Israeli government, Jerusalem, July 25, 2020. - AHMAD GHARABLI/AFP via Getty Images

Israeli Prime Minister Benjamin Netanyahu has been targeted by a huge wave of protests that has swept across the country over the last few weeks. Apart from protesting the corruption charges facing the prime minister, demonstrators are also protesting the flailing economy and the government’s alleged mishandling of the coronavirus crisis. The biggest protest so far took place Aug. 1, when more than 10,000 demonstrators gathered outside the prime minister’s residence in Jerusalem.

What really set this demonstration apart, however, was that opponents of these protests were joined by a new group, La Familia, which represents the most extreme fans of the Beitar Jerusalem soccer club. The group is made up of members of the far-right, notorious for their abject hatred of Arabs and the left.

La Familia had gained attention in Israel and around the world in 2013, because of the sign, “Beitar Forever Pure,” they raised. Group members had just learned that then-owner of the team Arcady Gaydamak planned on hiring two Chechen Muslim players. Then, in 2018, the Tel Aviv District Court sentenced eight members of the group to prison sentences ranging from 22 months to 48 months for violent attacks, including one in 2015, in which a fan of Hapoel Tel Aviv soccer team was attacked with a hammer. Also in 2018, La Familia members had verbally violent responses when Beitar owner Moshe Hogeg recruited Ali Mohamed, a Muslim player from Niger.

Now, seven years after the sign incident, it looks like La Familia fan club has turned into the attack dog of opponents of the protests against Netanyahu and his government. On July 30, for instance, they attacked reporter Yossi Eli and his team from Channel 13 News, which was sent to cover the protests in Jerusalem. According to Eli’s report, they then went looking for local Arabs to attack.

Not far from there, reporter Daniel Tsemach of i24news was reporting on what was happening from the side of La Familia. He was live on air when members of the group raced toward him, attacked him and threw him to the ground, together with his camera equipment. As soon as he recovered, he said, “With these sorts of situations, tensions are really high. And with your permission, I’m gonna try and get out of the way here."

Violent behavior from La Familia is nothing new — but the phenomenon of journalists and anti-Netanyahu demonstrators being targeted is new. What we are seeing is pro-Netanyahu people demonstrating against the anti-Netanyahu protesters. More so, some of the pro-Netanyahu people have no qualms about resorting to violence against what does not align with their ideology. They did not hesitate to say so on camera, and even called on activists to come to Jerusalem July 30, when the Fast of the Ninth of Av (Tisha B’Av) was over, to show those “leftist rags” that “the rules of the game are changing.” Obviously, this was not a question of politics.

Liri Shavit is a regular at the protests on Balfour Street where Netanyahu’s Jerusalem residence is located. She told Al-Monitor, “The demonstrators come with good intentions and a positive mood. They play music and they sing. On the other side, however, are the Netanyahu supporters who come angry, as if they are going to war and trying to cause a riot. In most cases, they target women. They chase after them and rip the signs out of their hands."

At a Cabinet meeting Aug. 2, Netanyahu condemned the demonstrations near his official residence, accusing protesters of “trampling on democracy.” In response, Benny Gantz, defense minister and alternate prime minister, said, "As a government we have a responsibility to allow the demonstrations to take place and to protect the demonstrators, who were unfortunately attacked yesterday.”

The story could be summed up like this: Netanyahu is worried about the spread of protests across the country, with an emphasis on demonstrations near his official residence on Balfour Street. As a result, he will not stop attacking these demonstrations, while repeating his mantra that the Israeli media is encouraging the demonstrations by the very fact that it is covering them. And if this sounds familiar, it could be inspired by a tweet by US President Donald Trump last May, during the protests against the killing of George Floyd.

So, what is Netanyahu really trying to achieve here? There can be no doubt that Netanyahu is looking for any way possible to suppress the demonstrations against him and his government. Or perhaps this is an attempt to stir his base to protest these demonstrations and serve as a counterpoint to the wave of protests sweeping across the country.

In a conversation with Al-Monitor, Attorney Gonen Ben Yitzhak, a familiar figure in the anti-Netanyahu protest scene of the last few years, said, “As usual Netanyahu is playing with fire when it comes to fringe groups on the right. Anything that cannot be said or done by the political right because of ‘political correctness,’ such groups are taking upon themselves. It can be racist groups [anti-immigrants] in southern Tel Aviv, the [settlers] Hilltop Youth, or, as is now the case, La Familia. Their hardcore hatred of Arabs and leftists is harnessed to serve Netanyahu’s own purposes. Once the demon is out of the bottle and blood is spilled, Netanyahu will claim that he had nothing to do with it and blame the police, the Shin Bet or the left. That’s how things worked in the past, and that’s what is likely to happen this time too.”