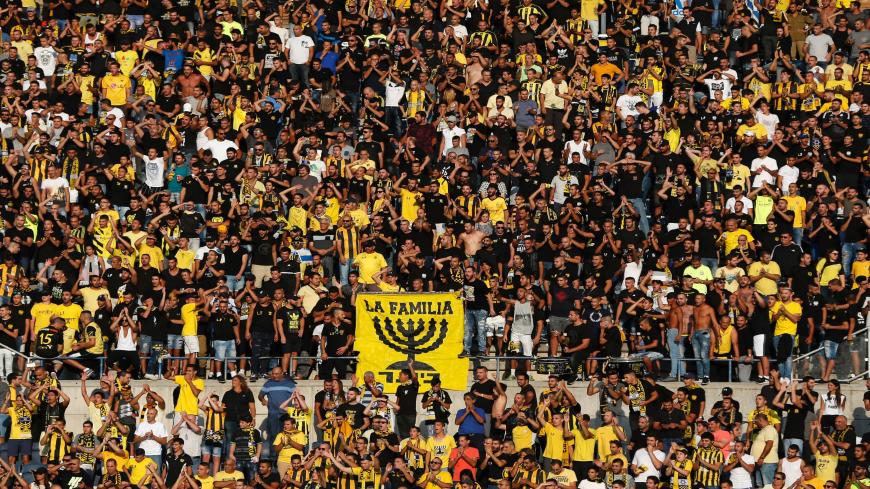 Beitar Jerusalem fans cheer on their team prior to the UEFA Europa League playoff soccer match between Beitar Jerusalem and AS Saint-Etienne, at the Itztadion Teddy Stadium, Jerusalem, Aug. 17, 2016. - Ahmad Gharabli/AFP via Getty Images

Israel’s Beitar Jerusalem soccer fan club has been struggling for some time against a small core group of racist, violent fans. Over the years, these fans have been fighting efforts to bring Arab or Muslim players into the club. Businessman Moshe Hogeg, who acquired the club two years ago, decided to ramp up the struggle against the racists, most of whom belong to an organized group called La Familia. In June 2019, Al-Monitor reported that Hogeg signed up a player from Niger called Ali Mohamed. This process met fierce opposition from La Familia, but Hogeg was adamant, and Beitar’s first Mohamed was well absorbed in the group and became a central player in the team.

However, that was not the end of the story. Following the normalization agreements between Israel and the United Arab Emirates and Bahrain, connections were made between entities in the sports and business world. The most interesting imminent deal is the one discussed with an Abu Dhabi investor, Sheikh Hamad bin Khalifa Al Nahyan, a member of Abu Dhabi's ruling family, to acquire some of the ownership of Beitar Jerusalem. Khalifa's investment company is active in the sports sphere in other places around the world.

On Dec. 3, Hogeg landed in Dubai together with Eli Ohana, chairman of the club and one of its former stars who still has much influence over the fans. They already met with Khalifa and negotiations are taking place regarding the acquisition of 49% of Beitar Jerusalem; Hogeg still wants to remain the controlling shareholder of the team. According to some reports, the deal might be concluded as early as Dec. 8.

La Familia, for its part, isn’t throwing in the towel. At the beginning of the week, they covered the Teddy Stadium — Beitar’s home turf — with hate graffiti, including "F--- DUBAI" and “Mohamed is Dead.” Beitar representatives hurried to erase the graffiti. On Dec. 4, about 100 fans of the group appeared on Beitar’s training field to protest the emerging deal. They broke through the fence, penetrated the field and forced the training session to stop. The fans cursed Hogeg, lambasted him with racial epithets, shouted to the players “Wear a keffiyeh already” and sang “Mohamed is Dead” and “F--- you Khalifa.” However, they focused their racist curses and snarls on player Ali Mohamed, Beitar’s first soccer player with that name. The Jerusalem Beitar representatives called the police and the security guards expelled the fans from the site.

Afterward, Beitar disseminated the following message: “We thank the thousands of the group’s fans for their sweeping support of the changes that the club is instituting. No one, not even the 70 people who came today, will deflect us from the path that we have chosen — the path chosen by the absolute majority of Beitar fans. We are proud of changes that are crystallizing, we will continue with them until we raise the club to its proper and decent place, for us and for you. The Emirates are aware of what is happening and will not be surprised over anything that takes place here by extremists, under any situation.”

Hogeg responded by saying, “I haven’t worried or let myself get excited about this stuff since I joined the club, not even today. … We talk about a minority, it is really a small minority, and [their behavior] only strengthens the need to do what we are doing. I said that I joined long before I knew that there would be any kind of peace [with the Emirates]. In my eyes, and according to the great rabbis, racism is blasphemous."

It is worth noting that Hogeg had met with Rabbi Chaim Kanievsky, spiritual leader of Israel’s ultra-Orthodox community, and received the rabbi’s blessing for his actions.

Hoged added, "We 'do not do' racism, certainly not in the holy city, and certainly not on my watch. I fought this from the first day to the last, we do not flinch, all the graffiti in the past and in the future. Our potential partner is also aware of this stuff and that’s part of the reason that we need to take action, and show that Muslims and Jews can work together, without fear.”

And what do the fans think? It seems that the large majority of the fans approve the changes, perhaps because they hope that the deal will inject enough money to allow Beitar to acquire top-level players who will upgrade the team. In the last decade, Beitar has been unable to return to its former days of glory on the field.

Ilan Cohen from Jerusalem told Al-Monitor that anyone who is a real fan and wants Beitar to succeed must support them on the professional level and improve its quality. He also cites Ze'ev Jabotinsky, founder of the Beitar political-Zionist movement, who called for equality and fair treatment toward Arabs in Israel and abroad.

Another fan, Yaakov Sela from Samaria (the West Bank), claims that Israel’s sports media and press actually encourage extremism. Sela told Al-Monitor that the media likes to lump all the Beitar fans together, despite their great number, and that the media purposely does not make distinctions among the fans in order to serve the narrative that all Beitar fans are Arab-haters and racists.

He said that ever since Hogeg acquired the club, he led a real revolution, by lowering Beitar’s "racism index," embarking on a “Love thy Neighbor” campaign and actually implementing this important rule himself. But the sports media would not accept the change and continues to search for the bad — the handful of fans who oppose Hogeg’s tactics. Meanwhile, Hogeg is not deterred and continues to stand by his principles, though paying a price for it. As soon as it became known that one of the Emirate royals was considering an investment in Beitar, the sports media tried to inflame the atmosphere and destroy the deal. Why? Perhaps out of habit, or perhaps the very thought that such a deal could come to fruition and Beitar would become a successful club made them crazy.

One rather well-known fan, Avner Netanyahu, son of the prime minister, tweeted that Beitar suffers from poor, unprofessional management: “Everything connected to Beitar is one great circle of sensationalism and nonprofessionalism. Let’s face it, this was true from the start. One uproar follows another, the fans put on the pressure, there are always problems with the youth department and others. Everyone, from the audience to the owners, recognize the problems and want to fix them. But it seems impossible."

Meanwhile, the Emirate investor has not backed down. If the agreement will indeed go through, the Teddy Stadium is expected to fill up with Emirate visitors in keffiyehs, in spite of La Familia.