Social media users are mocking La Familia fan club, notorious for its racism, over the deal signed yesterday for an Emirati sheikh to invest in the Beitar Jerusalem soccer club. 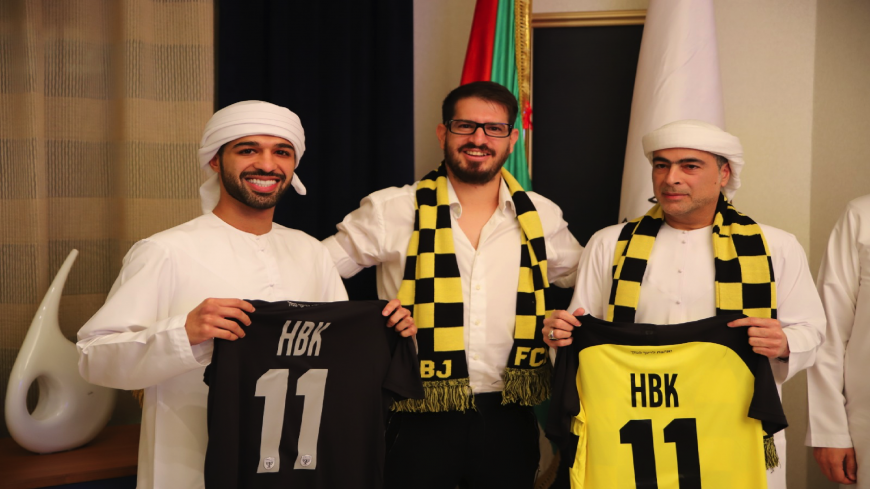 Israeli social media went crazy yesterday after the announcement of a deal between Beitar Jerusalem owner Moshe Hogeg and Abu Dhabi investor Emirati Sheikh Hamad bin Khalifa Al Nahyan. According to a statement by the Beitar soccer club management, Nahyan would invest $92 million over the next 10 years in exchange for 50% ownership — a first in Israel’s sports history.

Israeli soccer is not accustomed to such huge sums of money being poured in, but the networks were buzzing for other reasons. Not only was the deal a most tangible and direct result of the normalization agreement between the two countries, but it also confronted Beitar fans with a new, almost unimaginable reality.

Thousands of people across Israel support the mythical Beitar Jerusalem club, including President Reuven Rivlin. But a Beitar Jerusalem fan club called La Familia, notorious for its racism and hatred of Arabs, also supports the club. The group attracted public attention over its objection to the recruitment of Arab or Muslim players, often carrying a banner reading "Beitar Forever Pure." Several of its members are considered extreme-right activists. Some of them were suspected of interfering with anti-Netanyahu demonstrations. Last week, a bunch of the fan club stormed the training field of the Beitar team, shouting out "Mohammed is dead" and demonstrating against the imminent deal with the Emiratis.

Thus, the sealing of the deal was hailed by many of those condemning the racism and hatred of La Familia. Reacting to the statement by Beitar management, Guy Turgeman wrote, "I am a fan of Beitar and I am happy! Clean out racism and experience joyful moments. We deserve it!" Amit tweeted, "Congratulations to Beitar Jerusalem FC, the first Arab Jewish club in Israel. Good luck!" Matan Blumenblat proposed on Twitter to La Familia members to replace their now-outdated, years-old slogan "No Muslim player in Beitar" with this new one: "No Buddhist player in Beitar." Yoav Glasner tweeted a drawing of a group of happy little teddy bears beaming and glowing under the message "La Familia 2021."

Haaretz diplomatic correspondent Noa Landau tweeted the photo of La Familia hoisting their "Beirat Forever Pure" banner, but with one addition to it. Landau’s picture said "Beitar Forever 50% Pure." Haaretz political correspondent Chaim Levinson took things even further, tweeting, "At the end of the line, any way you look at it, it’s a simple story: Beitar Jerusalem purchased by a Muslim Sheikh in exchange for [West Bank] annexation being canceled."