Should Netanyahu worry over violent protests against him?

As political and public energy that has welled up against Prime Minister Benjamin Netanyahu over the last few years is about to burst the floodgates, some worry he could be the target of an assassination attempt. 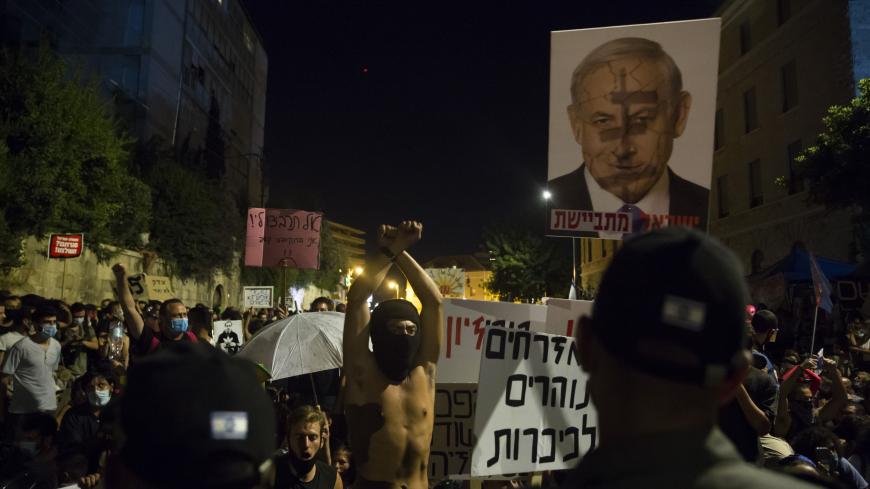 Protesters gather during a demonstration on July 25, 2020, in Jerusalem. Over several weeks, thousands of protesters have taken to the streets of the capital to protest about the government's handling of the coronavirus outbreak as the country suffers a second wave of infections. Israeli Prime Minister Benjamin Netanyahu is also facing criticism for staying in office while facing corruption charges. - Photo by Amir Levy/Getty Images

“Preventing the assassination of a prime minister and attacks on his family” was the heading of an unusual letter that Interior Minister Aryeh Deri sent to the head of the Shin Bet, Nadav Argaman, on July 19. Reading between the lines, it was easy to see the genuine concern expressed by someone who had served in the Cabinet of Yitzhak Rabin, the Israeli prime minister who was assassinated 25 years ago. Deri is now worried about another political assassination.

In his letter to Argaman, Deri wrote that he cannot stand silent when confronting the unrestrained and dangerous rhetoric he is hearing, with its calls to assassinate Prime Minister Benjamin Netanyahu and attack his family. He then asked the head of the Shin Bet to take the necessary steps to prevent another assassination. He ended his letter by saying, “Israeli society will have a hard time withstanding another event of this magnitude.”

Rabin’s assassination continues to traumatize Israeli society. It was the culmination of uninhibited incitement against the prime minister, who had just signed the Oslo Accords, which involved the evacuation of Jewish settlements in the West Bank. The country was awash with demonstrations and violence. The writing was on the wall in big, bold letters.

Comparisons between the energy behind the incitement and violence preceding Rabin’s assassination and the mood in the country today are all but inevitable. Rabin paid with his life for the ideological path he chose. His killing came as the climax of countless threats and increasingly vicious personal attacks. Demonstrators held vigil outside his private home. He was accused of everything from treason to murder.

Netanyahu is now perhaps the most hated and loathed prime minister in the entire history of the State of Israel. As the coronavirus rages in the background and he faces criminal charges in court, left-wing protests against him are evolving and changing. In the last few weeks, demonstrations outside his official residence on Balfour Street in Jerusalem have become the scene of clashes with protesters, who swear they will not leave the site until Netanyahu is thrown out of office. Facing off against them are the police and Netanyahu’s core supporters. These demonstrations inevitably end with the arrest of protesters and harsh images of police brutality, but also with startling images of bold acts committed by the protesters. There can be no doubt that this is an authentic expression of political and public energy that has welled up against Netanyahu over the last few years. Now it is about to burst the floodgates with an intensity never seen before. The question is how much worry this should cause.

Netanyahu is one of the most highly protected people in Israel, if not the entire world. His family, meaning his wife and two sons, also receive round-the-clock protection from the Shin Bet’s elite unit to protect VIPs. Because of the coronavirus pandemic, Netanyahu has spent much of the last few months holed up in his homes in Jerusalem and Caesarea, or in the Knesset and Prime Minister’s Office. All of these places are highly guarded, and yet there was something in the air a few days ago that caused the head of the Shin Bet to tighten security around the prime minister and his family. It took more than just Deri’s letter. It was a larger dynamic, gathering momentum, which the Shin Bet has been watching closely. The greatest concern was that in the current atmosphere, a “lone wolf” could act out of political and ideological motives.

According to Amos Harel, a commentator on security affairs for the Haaretz newspaper, “The Shin Bet is not waiting for any specific intelligence about an attempt to attack Netanyahu and his family. They are taking steps to reduce the possibility of a security incident that takes place without any prior warning, and which leads to a violent attack in the vicinity of the prime minister’s residence. Physical attacks against one of the protesters against the prime minister or one of the police officers at the demonstrations on Balfour Street are also of serious concern to the Shin Bet.”

As part of these preparations, tall barriers were erected July 25 around the prime minister’s home in Caesarea in preparation for a demonstration that took place at the site.

The mood has reached a boiling point, and it extends beyond the demonstrations. It is especially apparent on social networks, where calls to kill Netanyahu and his family are clear and unequivocal. These threats are not the fruits of social media bots, but drafted by real people, with names and faces. In one case, popular singer and musician Efraim Shamir called on people to “take down the psychopath”; others compared Netanyahu with the ill-fated King Louis XVI of France, who was sent to the guillotine.

Over the last few days, the editor of Maariv, Doron Cohen, has used his Twitter account to post tweets by people inciting for Netanyahu to be killed. He is trying to compare the situation in 1995 involving Rabin to today's, while warning that comments of this sort are not outliers. On July 27, he posted such tweets in a disturbing collage. This included such tweets as, “Interested in assassinating the prime minister very soon,” and “Bibi needs to be taken out.” Then there is the tweet that says, “Can someone avenge Rabin by putting three bullets in Bibi? I’m willing to compromise on one for Bibi and two for Sara.” And these are some of the more moderate tweets.

Senior Likud officials claim that this incitement against Netanyahu is not being taken seriously by law enforcement. Minister of Internal Security Amir Ohana said in an interview that Netanyahu is a victim of incitement that is not receiving an appropriate response and that in some cases is receiving no response at all.

Knesset Speaker Yariv Levin said incitement against the prime minister needs a decisive response, not empty slogans about freedom of speech. He is critical of State Attorney General Avichai Mandelblit, whom he claims isn’t being decisive enough in the steps he is taking to stop the incitement.

In contrast, the left claims that Netanyahu is the “inciter-in-chief.”

On July 27, President Reuven Rivlin spoke about the importance of preserving the right to demonstrate and warned against harming the demonstrators. At the same time, he warned the demonstrators to avoid violence.

So who are the real inciters? There can be no doubt that the summer of 2020 will appear in the history books as a political and social boiling point, fast approaching an explosion. The question is where it will all stop.