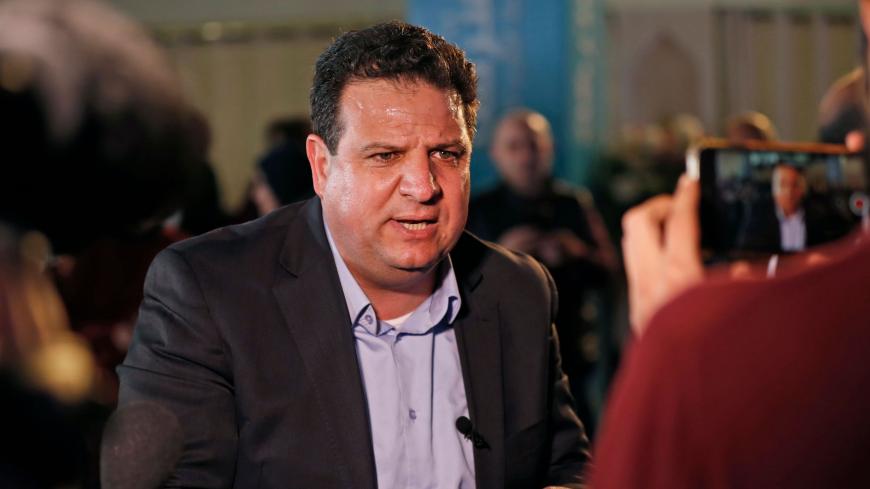 Ayman Odeh, head of the Joint List electoral alliance, speaks to the media in Israel's northern city of Shefa-Amr during the Israeli legislative election on March 2, 2020. - AHMAD GHARABLI/AFP via Getty Images

“We thought that the idea was long gone, but Arab Knesset members are proving that it is still alive and kicking. They care more about the interests of the Palestinian Authority than the interests of Israel’s Arab population. I think that no Arab in Israel who looks at the situation from a historical perspective and in terms of the impact it will have on their relationship with the Arab world, would still opposes the peace agreement with the United Arab Emirates,” said Uzi Baram, responding to the way that members of the Joint List voted against the normalization agreement with the UAE. Baram was a close confidante of late Prime Minister Yitzhak Rabin. Even now, at 83, he is still one of the most admired voices on the left.

While Baram is sympathetic to concerns that the agreement might marginalize efforts to reach peace with the Palestinians, he argues that it could have the opposite effect and propel peace forward. “The agreement is a catalyst, because this new reality doesn’t necessarily sideline peace." Baram says that normalization with the Emirates offers potential for a warm and informal peace.

The normalization agreement with the UAE, the establishment of relations with Bahrain and contacts between the government of Israel and other Arab states that might enter into similar agreements all force the lawmakers of the Joint List to confront a rapidly changing reality. Nevertheless, they don’t seem to fully understand the enormity of this historic chain of events, even as they bring change to the region. They are unable to recitify their loyalty to the Palestinian interests with normalization as a transformative event for Arab-Israelis. Their approach is narrow and focused on a single issue. It is also rather antagonistic toward the UAE and the other Arab states that are likely to follow suit.

“It is an empty peace. This agreement will only push peace away,” insists the chairman of the Joint List’s Balad faction, Knesset member Mtanes Shihadeh. “It is an agreement that rewards the occupation and Netanyahu’s policy of expanding the settlements. Gaza is still being held under siege but the UAE continues to reward Netanyahu and the far right, going so far as to give them a prize for the occupation.”

Head of the Knesset faction of the Joint List Ahmad Tibi explained to Army Radio, “President Trump is being catered to at the expense of the Palestinians.''

It is not at all certain that this belligerent attitude benefits the Joint List among its electorate. While many members of the coalition oppose the agreement, there are quite a few supporters, too, including many top opinion-makers in academia and the media. These voices may be heard less often, but when they are heard, they are decisive and clear.

“It is a mistake that history will prove to be unforgivable,” wrote Arab-Israeli journalist Jalal Bana. He claimed, “The explicit opposition by members of the Joint List to this agreement could cause serious damage to the way Arab-Israelis are perceived in the UAE and other Arab states, which would otherwise open their doors to Israel’s Arab citizens, like Jordan did when it accepted thousands of Arab students from Israel to its schools and funded their studies. By voting against the agreement, the members of the Joint List prove that they are not only opposed to war. They are also opposed to peace, and in many ways, to any Arab country that wants normal, friendly relations with Israel."

According to Sami Miaari, a lecturer at Tel Aviv University, “The Arab population of Israel wants ties with the entire Arab world. It is a strategic target, because they share our culture, so we want to strengthen our bonds with them. That is why I believe that many talented Arabs with advanced education and degrees would like to integrate the labor markets of Abu Dhabi and Dubai.”

Businesspeople point to the advantages Arab-Israelis have in the emerging new regional economy. Tali Zinger, a businessperson herself as well as a specialist in the Gulf economy, participated in a Globes conference called “Opportunities and Challenges: The Peace Agreement with the United Arab Emirates from an Economic Perspective.” She said, “There is the issue of adapting to the market. This not only involves adapting to the language, but to the culture as well: What do you do on Ramadan? How do you distinguish differences within the Gulf states? Arab-Israeli businesspeople could actually connect the diverse worlds.”

With business delegations flying back and forth between Tel Aviv, Dubai and Abu Dhabi over the last few weeks, Arab-Israeli businesspeople have expressed strong interest in the new possibilities. Direct flights to the UAE and Bahrain are scheduled to begin over the next few weeks, and quite a few Arab-Israelis are expected to be on them. This reality is likely to have a greater impact than any bellicose and shortsighted statement about the changing circumstances.

Last week’s polls held up a cruel mirror to the Joint List. A poll by Channel 13 earlier this week found that if elections were held today, the Joint List would win only 11 seats compared with current 15. A Maariv survey on Oct. 23 gave the party 12 seats. The trend is clear, and the Joint List is certainly worried.

On Oct. 20, the members of the Joint List met for a tense meeting behind closed doors about their dire situation. Some of them had harsh things to say about the way that the coalition has been acting and how it is alienating their base. The Joint List seems to have been struggling to find its place ever since the last March 2020 election, when it promised to have a say in choosing the prime minister and failed. Benjamin Netanyahu is still prime minister and the right is getting stronger, while they are losing support. Participants did not mention their rejection of normalization as reason for the decline, but that does not mean their vote did not contribute to the trend. Arab Knesset members will have to face this failure before they can regain their voters' confidence.