The Blue and White party is challenged by the anti-Netanyahu Black Flag movement, which is gaining tremendous momentum. 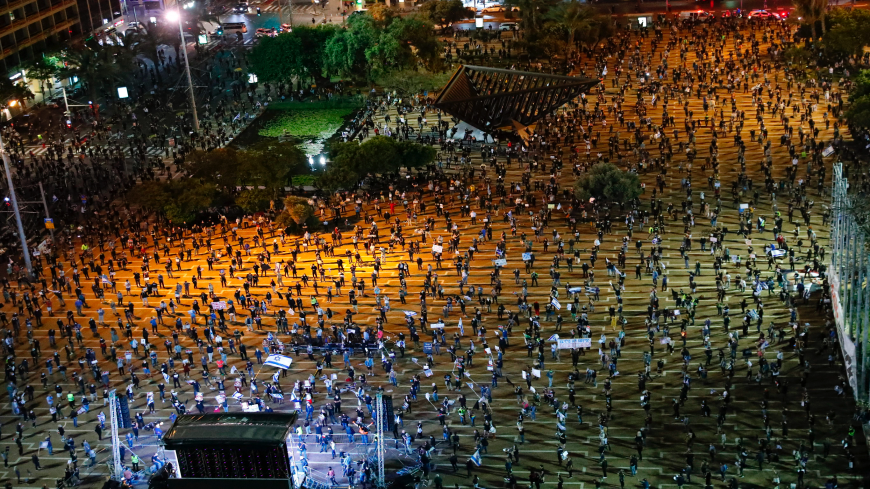 Israelis, keeping at a safe distance from one another, take part in a"Black Flag" demonstration, to protest against Prime Minister Benjamin Netanyahu and anti-democratic measures to contain the novel coronavirus outbreak, at Rabin Square in the coastal city of Tel Aviv, on April 19, 2020 - JACK GUEZ/AFP via Getty Images)

At the beginning of last May, when the conclusive versions of the government unity agreement between Blue and White party leader Benny Gantz and Prime Minister Benjamin Netanyahu were being finalized, a group of several hundred Black Flag demonstrators arrived in Tel Aviv in an attempt to prevent the agreement. Some of the demonstrators had voted for Blue and White under Gantz in three election campaigns and believed his promise that he would not serve with criminal defendant Netanyahu. As we all recall, the March 2 elections were inconclusive, the COVID-19 crisis erupted, and Gantz decided to break his promise and "sacrifice" himself for the common good.

This was a huge breaking point for hundreds of thousands of Gantz voters who felt helpless as they watched their dream shatter into pieces. They then directed their anger toward the section of Blue and White that had decided to join Netanyahu’s government.

Their two central targets were the homes of Blue and White Knesset members living in Tel Aviv who identified with the party’s left-wing flank: Tourism Minister Asaf Zamir, who had served in the past as deputy mayor, and Miki Haimovich, a former top-level television presenter and current environmental activist and vegan proponent.

The protesters wore black shirts, carried black flags and hunkered down under the prestigious building where Zamir lives. Using loudspeakers, they cried out to him messages such as “To the corrupt Asaf Zamir: Come and show your face and listen to what the public has to say — that you stole our votes.” They also read out loud sections of Netanyahu’s indictment.

But Zamir did not make an appearance. Neither did Haimovich, who lives within the same radius in Tel Aviv and could also hear the demonstrators shout “You stole our votes.”

On Oct. 2, less than five months after the unity government was sworn in, Zamir announced his resignation from it. The trigger for this was the government’s decision to limit demonstrations in Israel’s second lockdown. In a scathing Facebook post, Zamir wrote that he is very worried about his country, as important government decisions made by Netanyahu seem to be infected with bias. “The COVID-19 issue is only number two on his priority list — and I’m being optimistic,” he wrote.

Haimovich added fuel to the fire when she said that Zamir is not alone in his viewpoints and that a large number of Blue and White Knesset members are considering dismantling the alliance with the Likud. More so, in recent days, Haimovich has been spotted in the stormy, mass demonstrations in Tel Aviv. She was seen offering demonstrators support vis-a-vis the police.

Clearly, the battle over anti-government demonstrations in the past two weeks between Netanyahu and Blue and White has exposed the rift between the coalition partners. It might even be leading to the beginning of the disintegration of the unity government.

Netanyahu and the Likud led the hawkish view and claimed that mass demonstrations cause a rise in morbidity. Therefore, they said, protests should be restricted as part of the emergency regulations just as prayers are restricted for the same reason. Meanwhile, Blue and White tried to block these steps after the protest groups inflicted massive pressure on them. They (Blue and White) were accused of capitulating to Netanyahu’s dictatorship — “the criminal defendant” who is trying to halt demonstrations against him, opposite his home on Balfour Street. Ultimately, Blue and White’s struggle bore fruit and a compromise outline was formed.

It seems that Blue and White’s ministers and Knesset members — some of whom are young and politically inexperienced — found themselves under tremendous pressure from the protest movements that demonstrated against them. But it wasn’t just the demonstrations. They were also flooded with telephone calls and WhatsApp messages. Meanwhile, the polls pointed to the collapse of Blue and White altogether. All of this intensified the party’s internal unrest and agitation.

A large part of the credit for undermining the unity government under Netanyahu goes to the Black Flag movement. This movement was founded last March by four siblings after the third set of elections. It is amazing to see how a small, familial protest movement succeeded in gaining so many fans and so much public strength. One example is the weekend of Oct. 3, when Black Flags succeeded in spurring tens of thousands of Israelis, young and old alike, to leave their homes and protest despite the lockdown limitations.

It all started in the Schwartzman family living in northern Israel, where the four siblings expressed their frustration and anger in their family WhatsApp group regarding the recent elections. The four of them — one sister and three brothers ranging in age from their 30s to their 40s — work in hi-tech, engineering and science. They felt that the state they grew up in is being destroyed in front of their eyes by none other than Netanyahu, whom they feel violates basic democratic values. Several days later, they tore off some pieces of black fabric from clothes, tied the black fabric to sticks and appeared in Tel Aviv’s Rabin Square — a site that is the ultimate symbol of liberalism and secularism. This small family demonstration quickly turned into a protest rally. Several hundred people who heard about the demonstration via social media joined them.

Within two weeks, the “Black Flags” accumulated thousands of active supporters, while simultaneously establishing active mechanisms for fundraising, legal aid to fight the closure on demonstrations, finding spokespeople, acquiring accessories for rallies and, last but not least, lots and lots of black flags.

By the end of March, they had created a buzz in the media. At that point in time, the Knesset was paralyzed due to actions taken by the Likud to prevent the replacement of Knesset Chairman Yuli Edelstein by Blue and White. Israel was then under a severe lockdown, with millions of people removed from their workplaces who sat at home and worried about their livelihoods and health. Despite all this, each day saw convoys of cars and other vehicles on the way to the Knesset building, brandishing black flags and demonstrating.

Simultaneously, they sent out an appeal on social media, calling on people to hang black flags on porches and balconies to protest the harm being inflicted on democracy.

This was an authentic protest by a strong social group — people who are patriotic, serve in the army, pay taxes and are productive, and who decided to get up and take a stand. Later on, more well-known, senior personalities joined, such as former Shin Bet director Carmi Gillon and former Prime Minister Ehud Barak. According to the media, Barak contributes to the Black Flag movement in financing its activities.

After the Black Flags began to operate, additional protest movements arose to join the existing ones. They are the engine behind the anti-Netanyahu protest movement that continues to function even during the closure. The big question is: Will they succeed in attracting people from the right wing? So far this has not happened. Thus, Netanyahu continues to portray the protesters as members of the radical left.