Around 2,000 people gathered at Rabin Square in Tel Aviv on April 26 in a Black Flag demonstration against the unity deal between Prime Minister Benjamin Netanyahu and Blue and White leader Benny Gantz, and in defense of the country’s democracy. 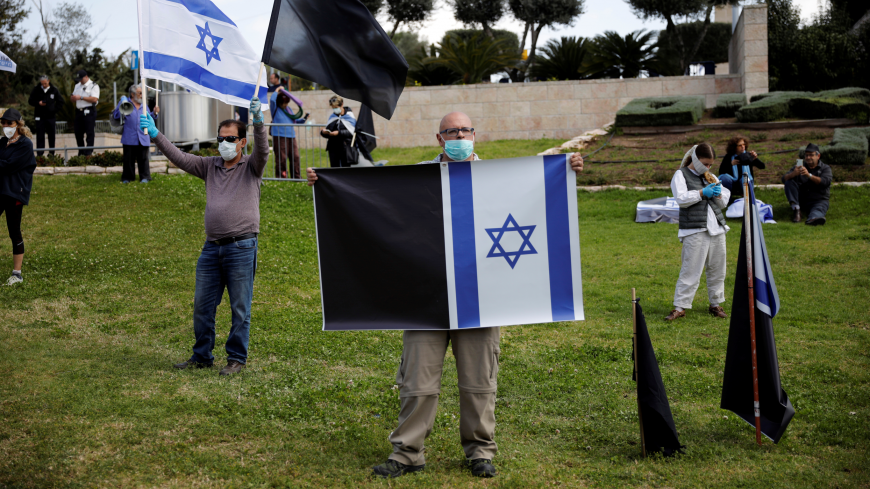 Protesters wearing masks wave Israeli and black flags as a sign of protest, during a demonstration against Israeli Prime Minister Benjamin Netanyahu's caretaker government, accusing it of undemocratic measures, outside the Knesset in Jerusalem, March 25, 2020. - REUTERS/Ronen Zvulun

About 2,000 protesters gathered April 25 at Tel Aviv's Rabin Square for one more Black Flag demonstration against the coalition deal signed between Prime Minister Benjamin Netanyahu and Blue and White leader Benny Gantz. Keeping the 6-foot social distance required as a result of the coronavirus threat, protesters dressed in black carried Israeli blue and white flags stained by black "tears." Former Shin Bet head Carmi Gillon, one of the keynote speakers at the rally, blamed the Netanyahu-Gantz deal for destroying Israel’s parliament and warned Netanyahu to stop the incitement campaign against the country’s top judges. Several hundred people also demonstrated in the town of Kiryat Tivon southeast of Haifa.

The demonstrators said the national-unity deal erodes Israel’s democracy, violates its Basic Laws and makes a mockery out of the country’s legal system and high court. Some demonstrators carried signs warning of the Knesset’s demise, while other warned that the deal would encourage incitement against Israel’s justices to the point of putting the lives of judges at risk and generating another political assassination (after that of Prime Minister Yitzhak Rabin in 1995).

The Black Flag movement started March 19 when a convoy of vehicles made its way from the center of Israel to Jerusalem to protest against then-Knesset Speaker Yuli Edelstein’s refusal to set up parliamentary committees and his attempts at thwarting Blue and White efforts to advance the replacement of Netanyahu.

The organizers of the convoy — three brothers and a sister who had not previously engaged in political activity — called on Israelis to hang black flags from their windows and balconies as a sign warning of the destruction of Israel’s democracy. Eyal, Yarden, Dekel and Shikma Schwartzman did not imagine that the protest would gather momentum as it did, and quickly transform into weekly demonstrations in Tel Aviv and elsewhere. Activists of the new movement hung black flags on symbolic sites across the country, such as the grave of Israel’s first prime minister, David Ben-Gurion, the Tel Aviv memorial dedicated to Rabin and several battle memorials.

As coalition talks accelerated, protesters urged Gantz not to enter into a coalition with Netanyahu in light of the three corruption cases in which the prime minister has been indicted, or at least not to allow him power over the judiciary in a new government. The protesters also warn against certain controversial policies advanced by the government to curb the spread of the coronavirus, and in particular phone tracking of civilian carriers of the virus. At a demonstration held April 16 outside Israel’s national Habima Theater in Tel Aviv, protesters carried carried signs saying "Coronavirus is used in service of dictatorship" and referring to Netanyahu as "crime minister’’ instead of prime minister.