How Netanyahu is turning Israel into a banana republic

Once the coronavirus crisis is over, Israelis will discover what Arab Knesset members warned a long time ago: Prime Minister Benjamin Netanyahu "stole" their democracy. 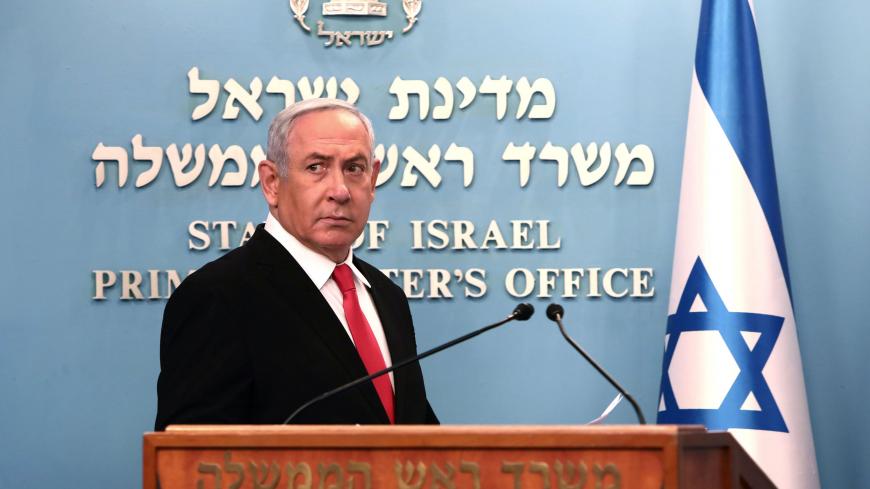 Israeli Prime Minister Benjamin Netanyahu delivers a speech regarding the new measures that will be taken to fight the coronavirus, Jerusalem, March 14, 2020. - Gali Tibbon/Pool via REUTERS

Blue and White senior Yair Lapid publicized March 17 a long Facebook post that he titled “You are not living in a democracy.” The very next day, it emerged that this was not simply the exaggerated statement of a politician to taunt his political rivals, but a sad truth. On March 18, a black flag was raised over Israel’s democracy. In an unprecedented move, Knesset Speaker Yuli Edelstein decided to close the Knesset session several minutes after it had opened in order to avert the appointment of committees that could enable the activity of the Knesset plenum and prevent it from being replaced. These committees that are supposed to oversee the government — such as the Finance Committee or Foreign Affairs and Defense Committee — would, in a civilized, developed country, certainly meet for marathon discussions regarding solutions to halt the spread of the novel coronavirus. But now we will have to wait until Edelstein or Prime Minister Benjamin Netanyahu decide that the political dangers hanging over their heads have passed.

Later on, during Channel 12 News, it was reported that Knesset legal adviser Eyal Yinon described the destructive acts of Israel’s legislative house in the clearest of words. “The Knesset has died a peaceful death; it no longer exists,” he said in a closed conversation. Earlier, in an interview on the same channel, Netanyahu said that while he was fighting the coronavirus, the opposition was occupied with “petty politics.” One would have thought that Netanyahu was the only one fighting the modern plague.

What is Netanyahu’s definition of petty politics? “We demanded they (Blue and White) commit that terrorism supporters won’t head the committees. We have yet to receive answers on it. Unfortunately, even in this time of emergency, Blue and White continue to cooperate with terrorism supporters,” Netanyahu said, referring to members of the Arab Joint List.’’ One might wonder how the same Netanyahu would react if any of the world’s parliaments would prevent a Jew from heading a parliamentary committee, even though he or she was chosen in democratic elections. And in any case, why do we need the agreement of Netanyahu — who lost the elections — to appoint a specific Knesset member to head a committee?

After hearing the harsh words of the prime minister, Joint List Chairman Ayman Odeh wondered in a tweet: “[Arab] heads of hospital wards [ — yes]. [Arab] heads of Knesset committees — no.” In a different tweet, he wrote, “There is no Jewish majority in any medical staff.” Indeed, Israeli-Arab physicians direct hospital wards; Israeli-Arab nurses, pharmacists, lab workers and sanitation staffs are all fighting the epidemic no less, and perhaps even more, than Netanyahu. Yet it is Netanyahu who presents himself on Israeli TV every night as “Mr. Public Health,” a model for the entire world.

The closing of the Knesset is another act of the Likud that delivers a body blow to Israeli democracy. On March 15, in the middle of the night, Justice Minister Amir Ohana used emergency-time instructions in order to suspend all non-urgent deliberations in Israel’s courthouses. Ostensibly, this was to protect the public health, but what it really prevented was Netanyahu’s trial, which had been scheduled to begin March 17. Netanyahu himself bypassed the Foreign Affairs and Defense Committee when he invoked emergency legislation to allow the Shin Bet to track mobile phone data in order to locate coronavirus carriers and subsequently identify and quarantine people who had come into contact with them. Blue and White senior Gabi Ashkenazi, who served as chairman of the temporary committee in the previous Knesset, protested. Ashkenazi argued that the members of the Foreign Affairs and Defense Committee were not given the opportunity to seriously discuss the new laws, but this didn’t help.

Thus, the opposition — Blue and White, Labor-Meretz and the Arab Joint List, for a total of 61 Knesset members (62 if you include Orly Levy-Abekasis of the Gesher faction) — are currently helpless in the wake of the coronavirus. Netanyahu and his associates have entrenched themselves in the rulership while totally ignoring the March 2 election results. They have closed the legislative branch (which they disdain) as if it were a partisan institution. In short, they are turning Israel into a banana republic where everything is permissible.

“Edelstein and Netanyahu have simply decided to tear up the rulebook and eradicate Israel’s democracy. We won’t allow this, and we’ll use all the tools at our disposal to put an end to this disgrace,” tweeted Blue and White Chairman Benny Gantz March 18. The only effective tool at this point in time is a petition to the High Court of Justice; however, this will probably become a real option only next week. Other tools, such as demonstrations, are not possible in the shadow of the coronavirus. According to Health Ministry instructions, Israel is under a partial closure and its residents are directed to remain in their homes. No more than 10 people may congregate at a time.

When the coronavirus pandemic passes — and it will pass — Israelis will discover that under the cover of the coronavirus scare, not only the Knesset died a silent death but Israeli democracy as well. Israel, which has proudly declared since its very inception that it is the only democracy in the Middle East, will wake up after the virus scare to realize that this is no longer true (and not because of the virus). It will be difficult to resuscitate this democracy afterward.

Should the Israelis committed to “the only democracy in the Middle East” do some real soul-searching, they will reveal that part of the responsibility for the change is on their shoulders. When the Nationality Law was debated at the Knesset in 2018 and when the legislative authority (the Knesset) indeed voted in favor of this law, which differentiates between its citizens in a racist manner, few went out to the streets to demonstrate. The masses did not take to the streets, because the subject was “only” the rights of Arabs. And when the High Court’s status was smashed and pulverized by former Justice Minister Ayelet Shaked, considering the court as favoring the Palestinians, few objections were heard. The silence of the public sent the message that people didn’t care because this was about Palestinians and their rights, not Jews. Even when Interim Justice Minister Amir Ohana, Netanyahu’s obedient associate, got up to finish up the work, considering Israel’s judges as enemies, no big protest erupted.

After the March 2 elections, when it turned out that the right-wing, ultra-Orthodox bloc received fewer mandates than did the center-left, Netanyahu argued that the votes of the Arab Knesset members should not be counted. No one went out to the streets to express their opposition. Even Blue and White adopted the vile narrative of “Jewish majority.” So, if the “Jewish majority” term had been accepted by the wide Israeli public, why complain about the annihilation of democracy?

Here we are not talking about Netanyahu’s blind fans who are willing to buy every argument that comes out of his mouth. Instead, in a state that is proud of its important democratic values in the Middle East, the majority remain silent. Democracy is realized not only in the voting booth but also in safeguarding its institutions after the voting is done. Instead, Israelis cast their ballots and then fell asleep on the job. Perhaps they were tired out; maybe they lost hope. Perhaps it is rooted in paralyzing fear of the Arabs in light of the ongoing incitement from Netanyahu and his cronies over many years. Perhaps the public is willing to waive the title of “democratic state” so that the Arabs cannot enjoy the protection democracy should offer all of its citizens.

We all are familiar with the post-war confession poem by ‎Martin Niemoller: “When they came for the Jews / I remained silent / I wasn't a Jew.” The Jewish-Israeli public remained silent when Arab citizens were excluded from the country’s democracy only for being Arabs. And they seem to also remain silent now as democracy is being taken away from them as well.