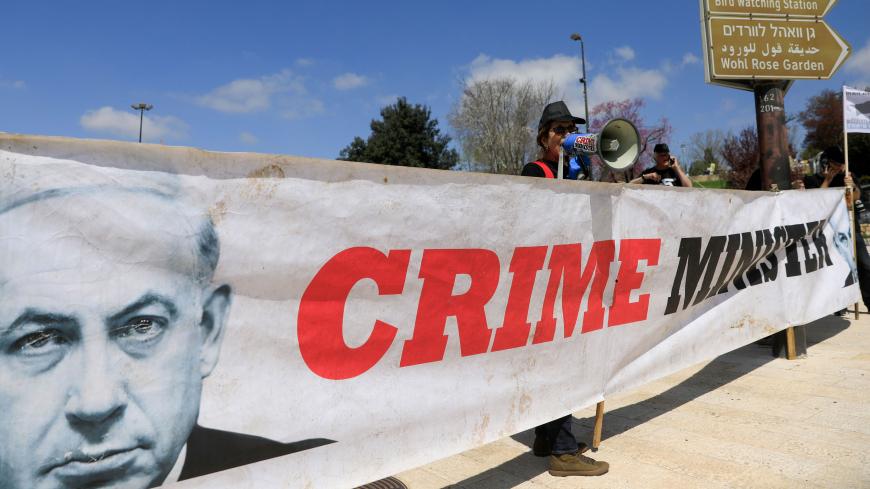 A protester displays a banner showing Israeli Prime Minister Benjamin Netanyahu during a demonstration in front of the Knesset celebrating the resignation of the Knesset speaker, Jerusalem, March 25, 2020. - EMMANUEL DUNAND/AFP via Getty Images

Israel has been teetering over a slide into anarchy with unbridled attacks on democratic institutions inspired by Prime Minister Benjamin Netanyahu. On Monday, March 23, Israel took another big step closer to the edge. And unlike in previous conflicts, the prime minister did not defend the power of the Supreme Court and other democratic organs of the state.

For the first time in Israeli history, senior government ministers from the ruling party were heard urging disobedience of a High Court order for Knesset speaker Yuli Edelstein (Likud) to convene the plenum and hold a vote for his replacement by March 25. For the first time, the speaker of the Knesset quit his job to avoid obeying a court ruling. Such events should have meant a judicial and constitutional earthquake in the country, but Netanyahu has exploited the coronavirus crisis to sail through the storm.

Acting on behalf of Netanyahu, Justice Minister Amir Ohana and Tourism Minister Yariv Levin led the assault on the nation’s top court. Ohana's is a bizarre appointment of a young junior Knesset member perceived as a puppet of the prime minister. Levin has been perhaps the minister closest to Netanyahu for quite some time. Neither minister minced words on Monday after the court instructed Edelstein to explain why he was refusing to convene the plenary to elect a new speaker. The justices also ordered Edelstein to allow the resumption of Knesset deliberations after he suspended the parliament on March 18 in a bid to keep control of the legislature from the Blue and White Party, which won a majority with its allies in the March 2 elections.

Ohana and Levin called on Edelstein to defy the court’s orders in unheard-of language. Levin said, "If Chief Justice Hayut wants to put herself above the Knesset, she is invited to arrive to the building with her guards and open the session herself. That way it will be clear we are witnessing a coup.”

Until recently, such a chain of events would have been unimaginable in a country that considered itself a state of law where the courts have the final word.

Previously, when right-wing politicians challenged the court’s rulings, Netanyahu has been quick to weigh in. In 2015, for example, he stated, “I reject outright statements against the High Court. Israel is a law-abiding democracy that respects the rulings of the court. That is the way it's always been, and that is how it will remain.” In 2019, he reiterated the same position in response to similar attacks. But now he's keeping mum. The difference is obvious: Back then, he was a confident, complacent prime minister. Today he is under criminal indictment for corruption. To save himself, Netanyahu is willing to crush the High Court, paralyze the parliament and undermine public trust in Israeli democracy.

The prophecy President Reuven Rivlin made two years ago is coming true. Rivlin warned that Netanyahu would never quit his position of his own free will. He’d burn down the club first, stopping at nothing to save himself. Rivlin argued that Netanyahu won’t resign to face justice as a private citizen, but drag the entire country with him to court.

Netanyahu’s trial is no longer a certainty. At a late-night meeting of his cabinet on March 24, the ministers enacted emergency regulations to circumvent existing law and allow court hearings by video. The ministers voted on a proposal that would allow such hearings for detainees whose continued detention requires court approval as well as trials of indicted individuals not in detention. The cabinet approved video court hearings for detainees, but rejected them for people under indictment — like Netanyahu. It will allow him to keep putting off his trial, which was supposed to begin on March 17 but was postponed due to the coronavirus-induced closure of the country’s courts. The distinction between video hearings for those in detention and those under indictment came from none other than Netanyahu’s envoy, Ohana. Netanyahu didn't even bother to recuse himself from the discussion and took part in the vote despite the clear conflict of interest. Most stunningly, the move failed to make headlines. The coronavirus outbreak allows Netanyahu to keep undermining the rule of law for his own survival, almost unchallenged.

Edelstein's resignation offers Netanyahu precious time, as it will go into effect after 48 hours, which brings us to March 27. The Knesset will not reconvene until March 30. Thus, Netanyahu has stolen from Blue and White’s Benny Gantz four days out of the 28 he was allotted to compose a new government. The Knesset was hamstrung, the High Court’s order ignored, customary conventions and proceedings were disparaged and the Knesset speaker simply walked away.

In all of its 72 years, the country had never faced such a political and constitutional crisis. What would have happened had Edelstein decided to thumb his nose at the justices without resigning? Would the police have entered the Knesset and forced him to hold a vote on his replacement? Would a tussle have broken out between the police and the Knesset guards, who protect the sovereignty of the parliament?

Israel now faces an internal battle between its ruling branches that could ignite a much larger conflict. Throughout the history of the people in the land of Israel, Jews were twice caught in terrible internal conflicts. Israel of 2020 is a regional power house, facing little existential or immediate threats. The only danger if faces is its internal chasm that is widening at an alarmingly exponential pace.

Netanyahu has managed to postpone the political process in the Knesset to next week as Gantz' deadline nears. The coronavirus overshadows public criticism against him, while the exhausted free press is too overwhelmed with the rapidly developing public health threat to make any waves. Netanyahu might survive this crisis, exploiting the chaos the country is now mired in. Still, he will surely be unable to survive the judgment of history. Under his watch, in his personal struggle for survival, Netanyahu pushed the country to the edge of the deepest abyss Israel has faced in its modern history.