Prime Minister Benjamin Netanyahu is determined to exploit the coronavirus crisis as a means to establish an emergency unity government. 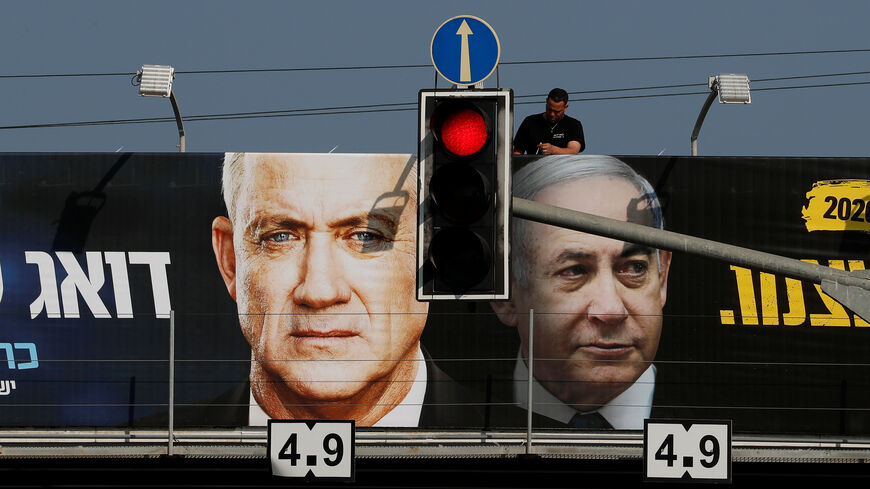 The coronavirus epidemic could not have erupted at a more opportune time for Israeli Prime Minister Benjamin Netanyahu. It turned him, once again, into the father of the Israeli nation, its supreme leader and national physician. No one knows whether this epidemic is a 21st century global apocalypse, as Netanyahu described the state of affairs on a special March 12 primetime address to the nation. What has been clear for quite some time is that the coronavirus has provided Netanyahu with powerful leverage he is using to dismantle the opposition by half the Israeli electorate to a government under his leadership.

In recent days, Netanyahu has faced the cameras every evening in time for the primetime news, teaching Israelis basic rules of hygiene, using amateur video clips to show how particles are sprayed by a sneeze and a tissue to demonstrate the correct way to catch them. The gig Netanyahu has taken on as national health czar is working. He is fostering an addiction and the public is going along, convinced that without Netanyahu, we are all lost.

In the evening hours of March 12, the time was ripe for a political bomb and Netanyahu dropped it skillfully with the right timing. As he was winding down his daily health update, he called for the immediate formation of an emergency unity government. Such a government, he said, would be limited in time. Don’t worry, he added, smiling, we will be able to pick up exactly where we left off before this crisis erupted.

Netanyahu has set a sophisticated honey trap to bait leaders of the centrist Blue and White party. As soon as they walk into it, they will discover that they are negotiating a minefield, a deadly arena of explosive devices from which there is no honorable way out. Netanyahu had been projecting supreme self-confidence in recent days in light of the obstacles being piled on Blue and White’s path to a minority government backed by the Arab parties. First to desert was Knesset member Orly Levy-Abekasis of the joint Labor-Gesher-Meretz ticket who announced she would not vote for such a government. She was followed by two Blue and White Knesset members — former Netanyahu aides Zvi Hauser and Yoaz Hendel, who also refused to support such a Benny Gantz-led government. Loss of these three crucial votes supposedly doomed prospects of a minority government. Nonetheless, Blue and White forged ahead with its offensive despite these setbacks. Its goal was to get the go-ahead from President Reuven Rivlin next week to try and form a new government, to replace Knesset Speaker Yuli Edelstein of Netanyahu’s Likud party with one of its own — Knesset member Meir Cohen — and to initiate legislation barring a politician under criminal indictment from heading a government.

Despite his outwardly calm demeanor, Netanyahu was more worried than ever as these moves progressed, panicking over the possibility that somehow he would indeed be forced to pack up and leave the residence on Balfour Street that he has called home for over a decade. The coronavirus turned everything on its face. His March 12 address to the nation placed the coronavirus in the same league as the greatest disasters in human history. Netanyahu was this close to summoning his favorite analogy to describe crises, the Holocaust of European Jewry in the last century. Israel is quarantining its residents, closing its gates, shutting down public institutions. Netanyahu’s Justice Minister Amir Ohana has even assumed powers that authorize him to freeze court deliberations — obviously nothing to do with the fact that Netanyahu’s trial on charges of bribery, fraud and breach of trust is scheduled to get underway on March 17.

Netanyahu’s ugly exploitation of the crisis to urge an emergency government confronts Gantz with a particularly cruel existential dilemma. The national climate demands a positive answer to Netanyahu’s call. When a mysterious epidemic threatens to fell thousands, there is no room for political nitpicking, vows of any kind or campaign promises. On the other hand, the Blue and White lawmakers know they are walking into a trap. They know that if the fight against the virus is crowned with success, Netanyahu will take all the credit. If it fails, he will take advantage of the catastrophe to blame them for the greatest health crisis to occur under his rule in the past 11 years.

Gantz's initial response was sophisticated. The Blue and White party chair said “yes,” in principle, but on condition that representatives of all the parties elected to the Knesset would be members of such a government. What he meant was that Netanyahu would also have to appoint an Arab minister, from the Joint List or on its behalf. That would allow Gantz to skillfully “taint” Netanyahu with the same “stain” that Netanyahu cleverly sullied Gantz ahead of the elections and in their aftermath: Partnering with the Arab Joint List. If Netanyahu refuses, Gantz could officially condemn him as a racist and blame him for the failure to form an emergency unity government. "Given the national emergency, there is no reason to differentiate between Jews and Arabs,” a senior Blue and White source told Al-Monitor on condition of anonymity. “Israel’s Arab and Jewish citizens will be struck by the disease to the same extent; no population should be excluded from the campaign to defeat it. If Netanyahu wants to pick up this glove, he is welcome. It would be a historic step toward true coexistence. Refusal will rip the mask off his face.”

Blue and White is facing substantive internal divisions regarding its way forward. Some in its leadership, among them former army Chief Gabi Ashkenazi, support a true effort to put together an emergency government. Others feel it would be a mistake to fall into Netanyahu’s trap, suggesting instead that the party offer Netanyahu a political “safety net” for all measures he adopts to fight the epidemic. “The state needs medical experts and resources. Any government can do that, there is no reason to turn the coronavirus into a lever for Netanyahu’s salvation,” a senior Blue and White official told Al-Monitor on condition of anonymity. Meanwhile, the chess game between Netanyahu and Gantz continues, while the sand in the coronavirus hourglass is quickly running out. The number of Israelis diagnosed with the disease passed 120 on March 13 (with estimates putting the real, undiagnosed figure in the hundreds), control of the situation is slipping and no one knows what lies ahead for the state. Not even Netanyahu.