If Blue and White leader Benny Gantz caves in to the Likud and lets them have the position of Knesset speaker, he would significantly weaken the Israeli parliament and damage Israel’s democracy. 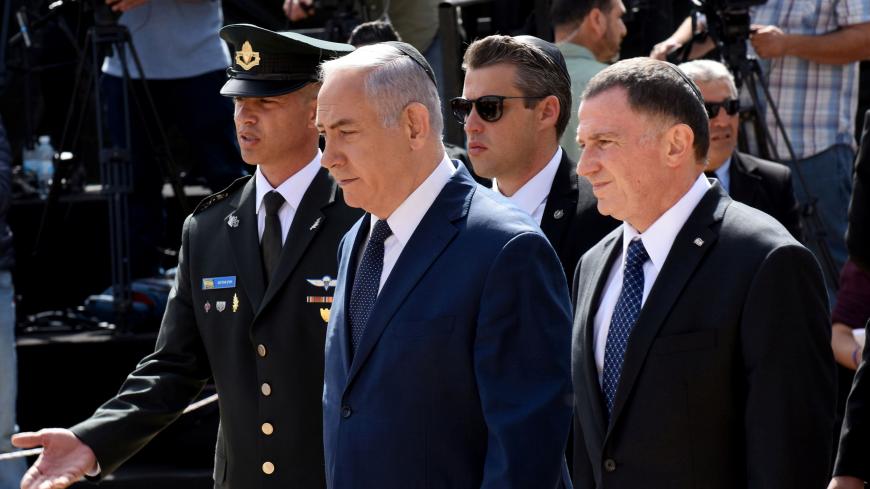 Negotiations between interim Prime Minister Benjamin Netanyahu and Blue and White leader Benny Gantz on forming Israel’s next government are ongoing, and among the unresolved issues is the identity of the next Knesset speaker.

Just two weeks ago, the Blue and White party, led by Gantz, along with its allied parties —​ Labor-Meretz, Yisrael Beitenu and the Arab Joint List — led a successful move (with the Supreme Court’s help) to replace Speaker Yuli Edelstein of the Likud party. At the time, Gantz thought replacing Edelstein was a vital move for him and his party to start their work in the Knesset and serve the citizens of Israel.

“We have been working hard all day through different communication channels, including me meeting personally with [Knesset member] Edelstein, who is refusing to let us congregate in the halls of democracy and work for the citizens and, above all else, tackle the challenge of corona,” Gantz told his party members March 18. “At this point, we have no choice but to turn to the high court.”

The court ruled in Gantz’s favor and Edelstein resigned March 23 rather than obey its ruling and calling a vote on his replacement. Since then, Gantz generated the dismantlement of Blue and White and announced he was joining Netanyahu in a power-sharing government. Is the identity of the next speaker still high on his agenda? According to media reports, Gantz rejected out of hand Netanyahu’s suggestion that Edelstein be restored to his former post. Tourism Minister Yariv Levin, the minister probably closest to Netanyahu, is among the leading candidates for the prestigious job.

For Gantz, this is a problematic choice. Having objected to Edelstein’s return (probably due to public pressure and the ire of his voters who even initiated a petition against such a move) after he disobeyed the high court’s ruling, how could Gantz accept Levin? After all, Levin had accused the Supreme Court last week of trying to take over the Knesset and of leading the state to anarchy.

It is unclear whether Gantz, a political rookie with limited parliamentary experience, understands the significance of the speaker’s identity and its implication for Israeli democracy and the principle of separation of powers. The Knesset speaker sets the agenda and decides what issues will be brought up for debate, professor Chaim Weizmann of the Lauder School of Government, told Al-Monitor. “This gives him tremendous power: when to convene, whether to convene, what to place on the agenda. That is why this is a highly significant position. To me, a person who calls for the violation of a Supreme Court ruling is not eligible to be speaker and not even a Knesset member,” he said.

A fairly recent example of the speaker’s power was provided in May 2019, when Edelstein brought to a vote a bill dissolving the Knesset elected in the April elections, even before anyone but Netanyahu (Gantz, for example) had gotten a crack at forming a government. In fact, that was the only bill adopted by the short-lived 21st Knesset. Three weeks later, facing harsh criticism of his move, the same Edelstein tried to undo the legislation in order to avoid new elections, but failed. The speaker, who until then had enjoyed broad support from all Knesset factions for his dignified conduct, lent a hand to a smelly parliamentary maneuver and to a political ruse that smelled even worse.

Some in Israel accuse Edelstein of having weakened the Knesset during his seven years in power and making it subservient to the government rather than preserving its independence. In November 2019, Dan Tichon, a former Knesset speaker and Likud member, said the Knesset no longer exists and the principle of separation of powers had been violated under Edelstein’s gavel. Former Labor Knesset member Mickey Rosenthal voiced similar sentiments a year ago. “It is no secret that the Knesset has turned mostly into a circus,” he wrote in April 2019. “There has always been discussion here of unimportant issues along with substantive discussions. That era is over. The politics of gossip and gimmicks has won, the marginal has overtaken the essence after even senior politicians, including the prime minister, adopted it.”

On the other hand, in 2009, Speaker Dalia Itzik claimed the Knesset was the weakest of the three branches of government (compared to the executive and judicial branches) and must be strengthened.

With the Knesset a relatively weak institution, and when the designated speaker is a crony of the prime minister and a staunch believer in curbing the Supreme Court, such an appointment has particularly dangerous consequences for the running of the Knesset and the future of Israeli democracy. The identity of the speaker is also of consequence to Gantz himself, who, at least on paper, is supposed to take over from Netanyahu 18 months after the government is sworn in and serve as prime minister, assuming a unity government agreement is indeed signed soon. His faction, now that Blue and White has split, is significantly smaller in size than the factions of Netanyahu’s right-wing and ultra-Orthodox bloc and will therefore have few tools with which to defend itself within the government coalition. If Gantz does not have a political ally in the speaker’s chair — and it is doubtful that Levin or anyone else nominated by Netanyahu could be an ally —​ Gantz’s situation will be especially grim if he eventually makes it to the rotation with Netanyahu.

The Likud is well aware of the importance of controlling the Knesset in terms of bringing controversial bills to a vote or interpreting the Knesset bylaws, and is therefore insisting that the largest faction in the chamber, i.e., the Likud, be given the coveted podium. Previously, Gantz and Blue and White had originally, after the March 2 elections, designated their colleague, Knesset member Meir Cohen, for the top spot, but the Likud threatened to call new elections (the fourth since April 2019) if Cohen were voted in to replace Edelstein. It would have been interesting to see how things might have played out had Gantz not been deterred by the threat.

Cohen would have been voted speaker with the slim 61-seat Knesset majority that Blue and White commanded at the time, and only then would Gantz have agreed to join a Netanyahu-led government. Ninety hands must be raised in the Knesset (now that Gantz holds the job) to replace an incumbent speaker, and that would have meant that Cohen would serve as speaker until the end of the Knesset’s term. If that scenario had played out, it is doubtful that Netanyahu would have carried out his threat to stop the talks on a power-sharing government with Gantz and opted instead for a fourth round of elections, especially in these days of the coronavirus. Netanyahu would probably have swallowed the bitter pill when given no other choice, but today this is all ancient history. The battle for the next Knesset speaker, who will be a Likud representative, is still raging.