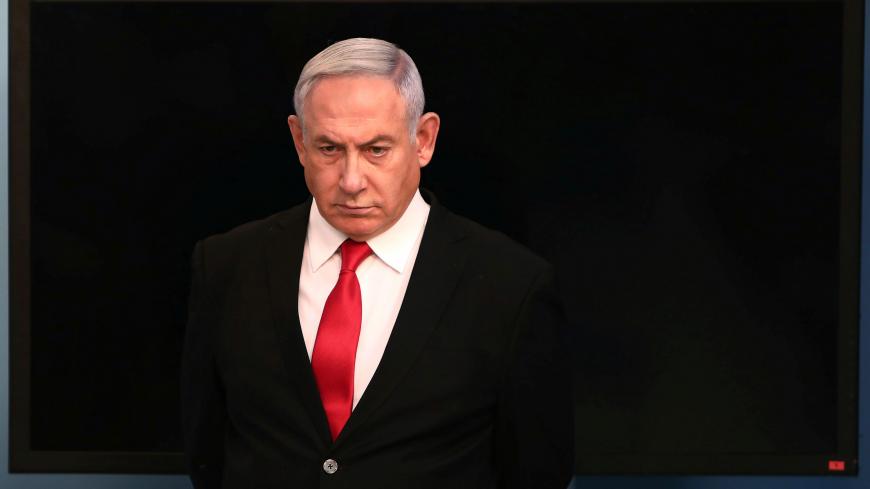 Israeli Prime Minister Benjamin Netanyahu arrives for a speech regarding the new measures that will be taken to fight the coronavirus, Jerusalem, March 14, 2020.

On the night of March 16, following a six-hour session, the Israeli government issued state of emergency regulations allowing the deployment of special measures vis-a-vis its civilian population without the approval and supervision of the Knesset. Specifically, the measures allow the Shin Bet to use digital surveillance developed in Israel to monitor cell phone locations. Until now, the Shin Bet had only used it to fight Palestinian terrorism. As of now, the agency is also authorized to monitor the movements of suspected novel coronavirus carriers.

While the approved use is limited in scope and time — designed in principle to locate people who were in contact with those infected by the virus — it is nonetheless a slippery slope that has generated a wave of criticism, especially from liberal circles. Use of these special means against terrorists is under close parliamentary supervision by the Knesset’s Foreign Affairs and Defense Committee, whereas the government’s middle of the night decision this week circumvented parliamentary oversight in order to save time and “save lives,” as Prime Minister Benjamin Netanyahu explained.

On the morning of March 17, Israelis were informed that they were under a “voluntary lockdown.” They were asked not to leave home other than for essential errands such as buying food and medicine. A restricted number of people are also allowed to go to work. Israel, like the rest of the world, is in the throes of a broad national struggle against the spread of the coronavirus.

However, at the same time, a titanic fight is underway to preserve Israel’s democracy. The country has not had an elected government for over a year, since December 2018. Netanyahu has since been serving as a caretaker prime minister, head of a transitional government. He last won the confidence of the people’s elected officials five years ago, in the 2015 elections. In three successive elections held since then — in April and September 2019 and in March 2020, Netanyahu failed to garner a Knesset majority. This week, President Reuven Rivlin tasked Blue and White leader Benny Gantz with forming the country’s next government upon the recommendations of 61 elected opposition lawmakers (compared with 58 who recommended Netanyahu), but he is unlikely to succeed, either. Israel has never found itself at such a political impasse, not to mention one occurring at the height of an unprecedented global crisis expected to result in a recession and mass layoffs.

In the midst of this chaos and in the epidemic’s shadow, Netanyahu is desperately clinging to office and in so doing eroding the democratic institutions and way of life guaranteed by the principle of separation of powers. Two of three branches of government — the legislative (Knesset) and judicial (the courts) — have been all but suspended by some type of government order or other. The executive branch is the only one still in pro forma operation, but it is not an elected government and is being run according to decisions made in the middle of the night by one man, Netanyahu, the leader rejected by more than 50% of the voting public, which voted on March 2 to replace him. Worst of all, the only way out of the mess is for Netanyahu and Gantz to get off their high horses and form a power-sharing government, with Netanyahu serving for its first two years, followed by Gantz.

Over the past week, Netanyahu’s Likud has been scuttling all efforts by Gantz’s Blue and White party to make good on the majority (61 of 120 Knesset seats) achieved by the “anyone but Netanyahu” bloc in the latest elections. Knesset Speaker and Likud stalwart Yuli Edelstein refuses to convene the legislature to vote for a new speaker, coming up with various excuses and dubious procedural evasions. The identity of the Knesset speaker is essential for control of the legislative agenda. By law, the Knesset is supposed to vote for a speaker right after being elected and no later than the date of the swearing-in of a new government. Edelstein is taking advantage of this deadline leeway to hole up in his office.

At the same time, he is refusing to allow the formation of a special Knesset committee for the manning of the parliament's various committees, thereby preventing deliberations on proposed laws. His refusal is especially significant in view of the first bill that was placed before the new 23rd Knesset on March 16, the day it was sworn in. Yisrael Beitenu head Avigdor Liberman is proposing a law that would prevent an indicted person from being tasked with forming a government. If adopted, this law would immediately put an end to Netanyahu’s political career. Thus, the Likud will do absolutely everything to torpedo the functioning of the Knesset and the passage of the bill.

Liberman himself told Al-Monitor that unless the sides work out a compromise and if Edelstein continues to prevent the work of the newly elected Knesset, he would call on the heads of all Knesset factions to join him in petitioning the Supreme Court on March 22 and urge all lawmakers who still believe in a democratic Israel to present themselves in the Knesset plenum on March 23 and stay in their chairs until Edelstein reconsiders. In the fight against Netanyahu, overshadowed by the coronavirus epidemic, Liberman appears to be the toughest and most obstinate opponent. Right now, it is hard to tell whether that will suffice.

Liberman was joined in recent days by Knesset member Yair Lapid of the Blue and White leadership quartet, who posted a Facebook video clip arguing that a prime minister who does not enjoy the confidence of the people cannot instruct them to stay home. Lapid came in for harsh criticism over his post, and he, too, knows that right now Israelis are closing ranks around Netanyahu’s leadership. Netanyahu, for his part, diligently faces the nation every evening, issuing new instructions and demonstrating how to use a tissue and cough into the elbow. Even some Blue and White voters view attempts by their party to engage in politics during a historic crisis as small-minded and unnecessary.

Netanyahu, as is his wont, is capitalizing on this sentiment, riding the coronavirus panic to an unknown destination. He is playing for time. His favorite scenario is a fourth election, but at this point, elections are not feasible. Netanyahu hopes to form a six-month “emergency government” with Blue and White, after which — buoyed by the waves of popularity he will garner for his management of the crisis — he will run in a fourth election and finally snag the coveted 61-seat majority he needs in order to rule. Sounds unbelievable, but then that is Netanyahu. He must never be underestimated.