Yisrael Beitenu leader Avigdor Liberman is the one pulling the strings behind recent developments and behind Blue and White's renewed drive to topple Prime Minister Benjamin Netanyahu. 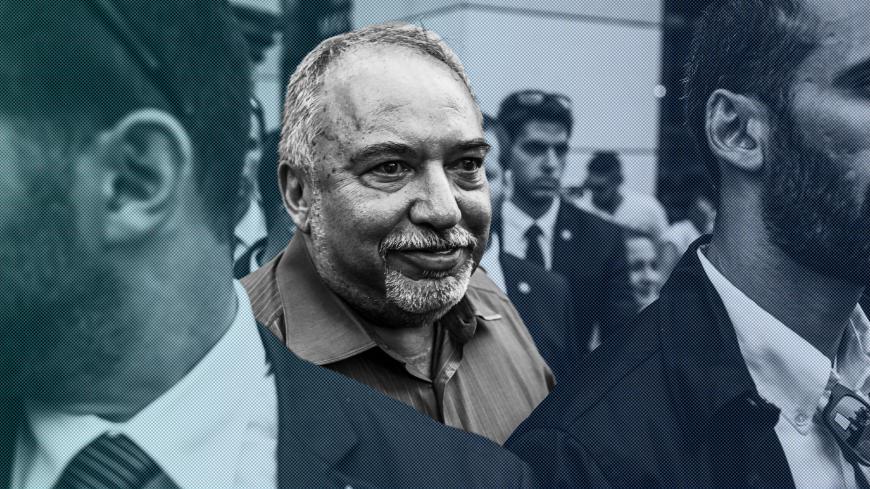 Once the last election in March was over, it took two days for Yisrael Beitenu Chairman Avigdor Liberman to come to his senses and realize that he can still complete his mission after all. There is still a chance for him to throw Prime Minister Benjamin Netanyahu out of politics.

When news channels first released their exit polls, it looked like Netanyahu strengthened his right-wing ultra-Orthodox bloc and stood at the head of the largest party. Then there was Liberman. Photos and footage coming from his party headquarters showed him shattered and spent. It was as if the light that had kept him going had finally gone out. Personally, he lost support between the second and third rounds of the elections and ended up with just seven seats. It was a disappointing outcome, as far as he was concerned. While Netanyahu celebrated before thousands of adoring supporters, Liberman seemed listless, as he gave a speech of his own to a very limited audience. What made matters worse was that the Blue and White party, which he considered to be a partner in his mission to bring down Netanyahu, ended up with three seats less than the Likud (33 and 36, respectively).

That all changed two days later. After shutting himself in his home and laying his options on the table, Liberman concluded that all was not lost. His battle with Netanyahu had not been resolved. The Likud as a party may have gotten stronger, but Netanyahu still did not win the 61 seats that his right-wing ultra-Orthodox bloc needed to form a government. In fact, his bloc only had 58 seats, while the “anyone-but-Netanyahu” bloc had 62. This may have seemed meaningless at first. Both Liberman and the Blue and White party had made an explicit promise to their voters before the election that they would not cooperate with the Arab-dominated Joint List. While the opposing bloc seemed consolidated in its support for Netanyahu, the situation on Liberman’s side of the divide was very different.

So, Liberman made a series of phone calls to the senior leadership of the Blue and White party, talking especially with the party’s No. 2 Yair Lapid, his ally throughout the last year. In these calls, Liberman informed them that he would lift his veto against cooperation with the Arab Joint List, thus paving the way for a historically unprecedented political partnership. Meanwhile, in talks with his associates, Liberman made some scathing remarks about Netanyahu: “He thinks he’s king here. I’ll show him that there are still a few more good players in the rink,” said Liberman to one top political official, who spoke with Al-Monitor on condition of anonymity.

The most important thing he said, however, was that he plans to recommend to the president that Blue and White leader Benny Gantz be tasked with forming the next government. In saying this, Liberman severed any bonds he may have had with the right once and for all. He also abandoned his bellicose, often racist attacks against the Israeli Arab minority and their political leadership. Although he would never call it that, he actually forged an alliance with them instead. The whole purpose of this alliance is to remove Netanyahu from office.

It all happened quickly after that. The moves that Liberman initiated made Gantz a relevant player again, breathed new life into the Blue and White party and led to the official creation of the Knesset’s anti-Netanyahu bloc.

Just a few days after the election, Liberman was quoted on Channel 12 News accusing Netanyahu of attempting to frame himself and his children of various crimes. This finally solved the big mystery that has accompanied the country’s political system since the April 2019 election: What lies behind the deep rift between Netanyahu and Liberman? After all, they used to be good friends. By now it was clear that Liberman had decided to destroy Netanyahu politically and had him trapped in his net. After the first election, in April 2019, he used his five seats to toy with Netanyahu before finally announcing that he would not join his government. At the time, he assumed that the Likud would rise up against Netanyahu and depose him themselves. The problem was that this never happened. Netanyahu dissolved the Knesset, called new elections and threw a wrench into Liberman’s carefully laid plans.

In September 2019, during the second round of elections, Liberman arrived armed with an effective campaign against the ultra-Orthodox. It was what he needed to win popularity among the anti-Netanyahu public. His messages were sharp and convincing, while his attacks on Netanyahu and the ultra-Orthodox became increasingly fierce. Nevertheless, the election still ended in deadlock, and the third election in a year was called. By now, Liberman was working openly with the Blue and White leadership against Netanyahu. Once the results came in, he finally decided to cooperate with the “enemy,” too, i.e., the members of the Arab Joint List, the very people that he used to say belong in the parliament in Ramallah, not Jerusalem. He then went on to recommend Gantz to the president, as did all the members of the Joint List, including its most extreme faction, Balad. This left the Blue and White party chairman with the most Knesset members recommending him, and a mandate to form the next government. Nevertheless, even now, Gantz still can’t form a minority government. The problem is two Knesset members from his own party, who still refuse to cooperate with the Joint List.

Even after he realized that Gantz could not form a government, Liberman refused to stop his campaign. During the last week, he spearheaded the effort for the anti-Netanyahu bloc to take over the various Knesset committees. Even if he is still calling for the formation of a unity government, it does not seem like that is what he is really trying to do. In fact, he seems to be doing the exact opposite. Together with Lapid, he is leading an aggressive campaign to replace Knesset Speaker Yuli Edelstein with another Knesset member of their choosing. The result is a constitutional crisis of historic proportions. This began when the Blue and White party petitioned the Supreme Court to order Edelstein to add the issue of replacing him as speaker on the Knesset’s agenda. The court did so, telling Edelstein he had until March 25. What this means is that from now on, Netanyahu will have to navigate the coronavirus crisis without controlling the Knesset or its committees.

At the same time, Liberman continues to attack Netanyahu, accusing him of exploiting the coronavirus crisis to ensure his political survival. He claims that Netanyahu is describing on purpose all sorts of apocalyptic scenarios, and that he is not making the right decisions.

Based on the way things look now, a unity government of the Likud and Blue and White does not seem likely, as much as Gantz would like to see that happen. In this scenario, Netanyahu would continue to serve as the transition prime minister, while the opposing bloc, led by Liberman and Lapid, would continue to try and bring him down. They would try to change the law, so that a person indicted for criminal offenses would not be allowed to form a government. This personal law, obviously targeting Netanyahu, is yet another one of Liberman’s ideas to bring an end to Netanyahu’s political career.