Iraqi cleric Ammar al-Hakim, the head of Iraqioun parliamentary bloc and Hikma movement, is seeking to chart a nonsectarian alternative to the existing political structure. 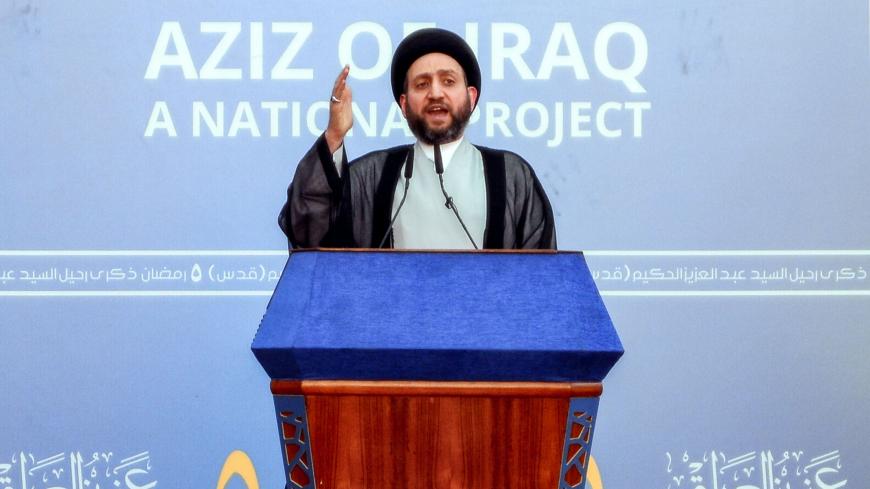 Iraqi Shiite Muslim leader and Shiite Muslim cleric Ammar al-Hakim gives a speech during a commemoration of his father, the late Shiite cleric Abdel Aziz al-Hakim, in the central holy shrine city of Najaf on May 10, 2019. - HAIDAR HAMDANI/AFP via Getty Images

In order to find a way out of the long-standing political crisis, Iraq is going through an early election process that could reshape the Iraqi political scene.

However, the parliament failed Oct. 14 in its attempt to pass a new electoral law for elections to be held next year. Also, the federal court in charge of overseeing the elections and the electoral commission that would manage the elections have not been finalized yet.

This is while the protesters are calling for a new wave of demonstrations to begin Oct. 25.

And there are other disputes in Iraq that are sharper and broader than the elections issue. There are militias acting against the state, and the United States is threatening to close its embassy in Baghdad, something that would shake the entire political system in the country. Also, the economic crisis is growing worse and worse.

Amid these circumstances, the head of the Hikma (Wisdom) movement, Ammar al-Hakim, is calling for a new social contract in Iraq to form a new political system responding to the Iraqi people's demands, which have greatly changed since the current system was put into place following the 2003 invasion.

“The social contract on which Iraq was founded after 2003 is no longer able to produce a balanced, stable system in Iraq,” Hakim told Al-Monitor, pointing out that Iraq is witnessing a new generation that had not taken part in forming the political system in 2003.

The majority of protesters in the demonstrations that began in October 2019 were underage or had not yet even been born in 2003. The protesters are demanding serious changes in the political system; there are proposals to change the constitution or even bring the entire political system down.

“All these variables have prompted us to put forward the new social contract project, which does not necessarily cancel the previous phase, but rather is based on its positiveness,” Hakim said.

in response to the question about what form a new political system should take, Hakim said, “We believe that fundamental changes must be made in some articles of the constitution in the process of developing the political system.”

Hakim said he believes that elections in Iraq must have only one winner — the party or coalition formed before the elections that wins the largest number of seats in the parliament.

It is worth mentioning that a dispute between former Prime Minister Nouri al-Maliki’s State of Law coalition and former Prime Minister Ayad Allawi’s Iraqiya coalition led Iraq's federal court to allow political parties to form new coalitions after elections and claim to be the largest political entity and then the election winner. Consequently, in 2010, Maliki, who was then prime minister, was able to increase his coalition's size after the election by joining the National Iraqi Alliance; as a result, Maliki remained in his post, even though Allawi's coalition had won more seats.

Hakim sees early elections as a path toward a solution for the ongoing Iraqi political crisis. For this reason, he is calling for careful preparations for next year's elections.

Prime Minister Mustafa al-Kadhimi has called for the elections to be held in June 2021. However, this requires some essential steps, including approving the electoral law in the parliament and forming the federal court and the electoral commission.

Hakim is urging the Iraqi parliament and judiciary system to accelerate the process of finalizing these three requirements. However, he believes that in addition to all those three steps, it is essential to produce a healthy and transparent political environment that guarantees a smooth transition process to a new government accepted by the Iraqi people and able to bring stability and the rule of law in Iraq.

Hakim warns about the influence of political money and armed groups on the early elections.

The Iraqi government has been conducting campaigns to fight corruption and for all arms to be under state control. However, these campaigns have faced many challenges from the political parties and militias.

As part of his effort to support the government,  Hakim formed a new parliamentary bloc called Iraqioun; 46 members of the 329-seat parliament joined it.

The new bloc supports the state’s efforts to impose the rule of law on all political and military forces in Iraq and to keep all types of arms in the state’s hands.

The head of Iraqioun strongly condemned the attacks against all foreign diplomatic missions and military bases and troops in Iraq, considering this to be very harmful to Iraq's image and position in the world. He called upon the Iraqi government to confront these acts and to exploit a national mood that opposes such attacks.

Following US threats to close its embassy in Baghdad, many Iraqi politicians, including a number of commanders and leaders of the Popular Mobilization Units — particularly PMU head Faleh Fayadh and Badr Organization chief Hadi al-Amiri (also the head of the PMU’s Fatah bloc in parliament) — condemned the attacks against foreign missions and bases.

Hakim is working on forming a large political coalition for the elections. He is calling for a cross-ethnic and cross-sectarian coalition, including all Iraqi components. He believes the Iraqi political scene should move from ethno-sectarian rivalry to political rivalry in a way where governments are formed based on political alliances and where a strong political opposition is also formed that can help correct the government's course of action.

He is approaching political parties from various ethnic and religious backgrounds in order to form the coalition. His team also is meeting regularly with protesters in an effort to bring some of them into the coalition.

However, sectarian divisions have deep roots inside Iraqi politics, which make it difficult for such a project to be implemented.

Indeed, Hakim’s Wisdom bloc may be the only Shiite political movement warning about the current dangerous situation that also is calling for fundamental changes to develop a new social order in Iraq. He has summarized his vision about this new Iraq in three terms: unity, sovereignty and a strong Iraqi state.