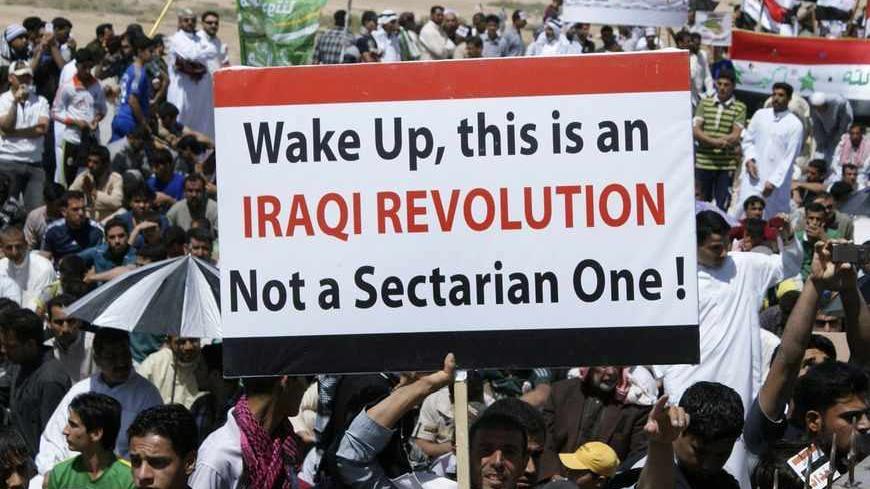 Iraqi Prime Minister Nouri al-Maliki seemed confident that he will achieve “a landslide victory” in the local elections on April 20. His confidence was apparent in the statements he made while campaigning for his State of Law coalition. He called for “early elections” from which will emanate a “majority government” that will grant him a “third term.”

Maliki’s electoral proposals reveal the nature of Iraq’s political divide. He said, “The political process has entered into the recovery room. Relations between our partners was based on disruption, which necessitates early elections that will draw a new political map to revive the country...Security and development will not be achieved unless there is political stability, which is achieved by forming a majority government...What exists now is not a partnership, but quotas, and this is very harmful to the political process as long as there is no political majority that supports the local and federal governments.”

Maliki, who is both the prime minister and head of the State of Law coalition, had previously called for a “majority government” by asserting that his coalition will win “a majority of the seats in all Iraqi cities.” He also asserted that his opponents’ attempts to prevent his nomination for a third term as head of government (2014-2018) were “desperate” and “unconstitutional.”

What is said during electoral campaigns is not normally given a lot of weight, but in the very complex and deteriorating political situation in Iraq, campaign statements tend to reveal the nature of the crisis and the proposed solutions.

Maliki’s opponents believe that a “majority government” implies a sectarian majority composed of Shiites that will exclude the Sunnis and Kurds. They also wonder that since Maliki has monopolized power despite the agreements he struck with his partners and despite their presence in government, what would happen if his political party was allowed to monopolize the cabinet? They also find it problematic that Maliki is insisting on a third term as a prime minister who controls all the executive authority, while dozens of laws that limit the prime minister’s powers are being stalled. Maliki’s opponents are trying to set term limits for the premiership. They have presented a law in that regard to the Constitutional Court. Sources say that the court will reject that law.

The question being raised amid all these controversies is: how can a majority government be formed in a religiously and ethnically divided country such as Iraq?

The Iraqi constitution says that the Iraqi president is elected by a two-thirds parliamentary majority, or 216 out of 325 votes, and the president appoints a prime minister on condition that the latter is supported by 163 deputies. So Maliki forming a majority government seems beyond even the most optimistic readings.

One, Maliki should reduce the size rival Shiite parties, such as those headed by Muqtada al-Sadr and Ammar al-Hakim, and then persuade them to join his cabinet after they have given large concessions.

Two, Maliki needs to either win over the Sunnis and get them to vote for him, or persuade Sunni forces that win 40 seats in the next elections to join his cabinet.

Three, Maliki needs to either persuade the Kurds to join his Cabinet or split the Kurds and win over at least 25 Kurdish deputies.

In politics, there are no absolutes. It is possible that Maliki would achieve the above requirements. But if that happens, it will be no more than a reproduction of the “political partnership” government — about which Maliki now complains — with the exception that it would exclude the forces and figures deemed disruptive for the government. Those forces and figures are today represented by the Arbil-Najaf alliance, Sadr, and Kurdish and Sunni leaders.

On the ground, it is unlikely that the Sadr bloc will be defeated in the next elections. It is popularly stable in the Shiite cities and holds 40 parliamentary seats. It is also difficult to break the Sunni bloc that for months has been supporting the demonstrations opposing Maliki’s policies. That bloc is represented today by the speaker of the Iraqi Parliament Osama al-Nujaifi and the Iraqi List bloc headed by Ayad Allawi. After accounting for those who withdrew from that bloc, its size now stands at 70 seats. It would also be very difficult for Maliki to beat Kurdistan region leader Massoud Barzani or break his alliance with other Kurdish parties.

Trying to form a “majority government” is normally acceptable. In the end, that is the point of holding elections. But it is unwise to talk about forming a “majority government” while ignoring the divisions caused by ten years of political disarray and the presence of a vague constitution, delayed and disputed laws, sectarian polarization, and regional divisions that may lead to civil war.

Iraq is still stuck in a long transitional phase. It will not end by forming a “majority government” but rather by reaching a broad social and political agreement that clarifies the mechanism of governance, the state’s identity, how wealth is distributed, the prerogatives of those in power and the rights of the citizens.

A “majority government” is not just an electoral slogan by Maliki. It is a political approach that causes more internal divisions, and those divisions will determine Iraq’s struggle in the coming months.