The strikes on Monday reportedly targeted a training camp run by the Failaq al-Sham group. 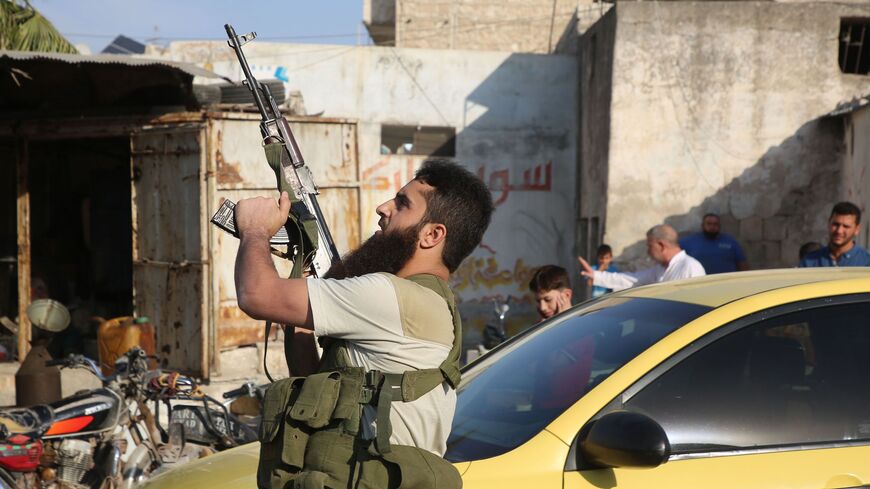 A fighter with the Turkey-backed Faylaq al-Sham rebel faction in Syria shoots in the air during the funeral of 10 of the faction's fighters in the northwestern city of Idlib, on Oct. 26, 2020, following their death in a Russian airstrike. - MOHAMMED AL-RIFAI/AFP via Getty Images

As many as 100 others were reportedly injured when warplanes targeted a training base run by Failaq al-Sham, one of the main rebel groups backed by Turkey in the country’s civil war.

Failaq al-Sham operates in Idlib province, one of the last pockets of territory still in the hands of the opposition. Its training camp in the town of Kafr Takharim is about six miles (10 kilometers) from the Turkish border.

Capt. Naji Mustafa, a spokesperson for an umbrella group of Turkey-backed fighters known as the National Liberation Front, condemned what he called a Russian “provocation.”

“The raid is a clear and ongoing violation" of the truce agreed to by Russia, he told Al-Monitor in a statement on Monday, warning the rebels will take “revenge for our martyrs.”

The attack is among the deadliest since a cease-fire came into force last March, bringing an end to an 11-month government offensive on the region that killed more than 1,600 civilians and displaced over 1 million, according to the United Nations. Rights groups accused the regime and its main ally, Russia, of carrying out disproportionate and deliberate attacks against civilians in an effort to retake the rebel territory.

The March 5 truce was brokered by Moscow and Ankara, which back opposing sides in Syria's civil war. The deal managed to stem the flow of displaced civilians rushing to Turkey’s doorstep, but at the same time locked in the territorial gains made by Syrian government forces during their brutal offensive.

The attack on Failaq al-Sham comes on the heels of an American drone strike last week that targeted a meeting of suspected al-Qaeda senior leaders in Idlib.  The northwest enclave is home to a number of moderate rebel groups but is dominated by the hard-line Hayat Tahrir al-Sham. The al-Qaeda-linked group Hurras al-Deen also holds sway in the region.