The Turkish president's comments come a year after Turkey launched an offensive against Kurdish fighters in northeast Syria. 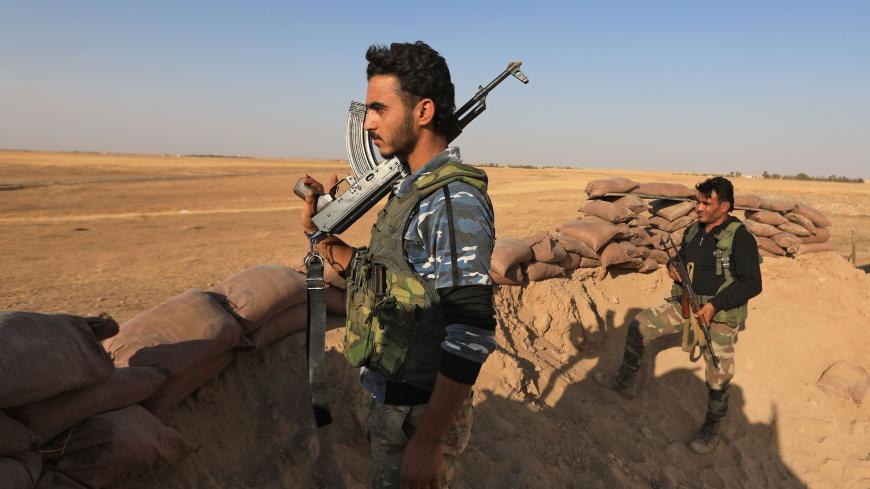 Turkey-backed Syrian fighters man a sand barricade near the rebel-controlled town of Tell Abyad in the northern Syria's Raqqa province, along the front line with Syrian Kurdish forces controlling the Kurdish-majority city of Kobani, on Oct. 10, 2020. - BAKR ALKASEM/AFP via Getty Images

A year after launching an incursion into northeast Syria, Turkish President Recep Tayyip Erdogan raised the possibility of another offensive against US-backed Kurdish forces in the war-torn country.

"We see the presence of terrorist organizations in areas along our Syrian border not under our control," Erdogan said in an address to lawmakers in his ruling party Wednesday. "If the terrorists here are not cleared as we were promised, we have the legitimate right to mobilize once again."

Last October, Turkey’s military launched a long-planned cross-border operation to expel Kurdish militias Ankara views as terrorists from the border and create a “safe zone” in which to relocate some of the three million Syrian refugees in Turkey. Some 200,000 civilians were displaced during the offensive in what critics said was an attempt to ethnically cleanse an area inhabited by Kurds.

The assault on the Kurdish-led Syrian Democratic Forces, who partnered with the United States to defeat the Islamic State in Syria, drew widespread condemnation from both parties in Washington. The Trump administration blacklisted several Turkish officials and ministers but removed the sanctions nine days later after Turkey reached a cease-fire with Russia that called for the Kurdish fighters to withdraw from the border.

During his speech to parliament, Erdogan also referenced the suspected Russian airstrikes that killed dozens of Turkey-backed rebel fighters in Idlib province on Monday. The attack on Faylaq al-Sham, one of the main rebel groups in the so-called Syrian National Army (SNA), marked the deadliest round of violence since Turkey and Russia brokered a cease-fire for the northwest territory in March.

“Russia's strike targeting Syrian National Army forces' training center in the region of Idlib is a sign that a lasting peace and calm in the region is unwanted,” Erdogan said.