Al-Azhar coordinates with army to fight drugs in South Sinai

South Sinai is marred by the growing phenomenon of drug cultivation and traffic, and while the Egyptian police and army are launching intense security campaigns to remove and burn hundreds of drug farms, the state has turned to Al-Azhar to organize advocacy convoys to South Sinai to persuade the people that Islam prohibits the cultivation, trade and use of drugs. 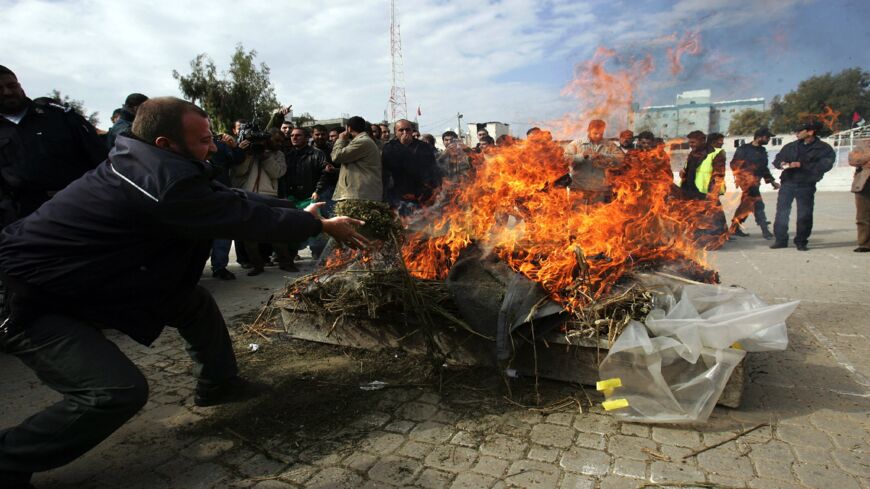 Palestinian policemen loyal to Hamas burn confiscated dried bango plants at police headquarters on Dec. 9, 2007, in Gaza City, Gaza Strip. Thousands of bango plants and other kinds of drugs were burned after they were seized from Gaza and underground tunnels between the Gaza Strip and Egypt. - Abid Katib/Getty Images

Al-Azhar Al-Sharif sent advocacy and medical caravans to South Sinai on Sept. 26 to confront the phenomenon of drug cultivation in the governorate. The caravans included 16 advocates, including four women and a number of doctors.

The caravan held a workshop with the people, including the youth, of South Sinai to explain how to deal with the phenomenon of addiction and drug cultivation. The workshop also dealt with abuse issues, presenting treatment methods and offering means of getting rid of the effects of drug abuse.

Meanwhile, the Egyptian army is conducting intensive campaigns to destroy hundreds of farms where drugs are grown, as the army announced on Sept. 17 the destruction of 146 drug farms in South Sinai.

The Egyptian police announced in July that two acres planted with the narcotic bango (cannabis) were destroyed in four mountainous farms in South Sinai.

On March 24, the Egyptian army revealed having seized tons of drugs and destroyed 43 bango farms stretching over a total area of ​​32 acres and 513 poppy fields, extending over a total of 416 acres in South Sinai.

Meanwhile, in January, the Ministry of Interior torched 400 drug farms in South Sinai.

This comes as part of the state’s efforts to eradicate the drug cultivation phenomenon, coinciding with other means such as advocacy campaigns, to persuade the people of South Sinai that the Islamic religion prohibits it.

Also in January, residents of Dahab in South Sinai signed the first code of honor to combat drug trafficking and confront and reject traffickers. Residents also pledged they would instead report to authorities any person involved in the trafficking of narcotic substances.

In March 2019, Minister of Endowments Mohamed Mokhtar Gomaa delivered a sermon at As-Salam Mosque in the city of Taba in the South Sinai governorate about Islam’s teachings against the abuse and cultivation of drugs.

The crisis of drug cultivation and sales in the South Sinai governorate is not new; the governorate has struggled with this issue for years. Khaled Fouda, governor of South Sinai, said in press statements in 2011 that “drugs are publicly sold on the main streets and in broad daylight in the city of Sharm el-Sheikh in the governorate.”

Fouda also said that during his undercover field trips to the neighborhoods of cities, he witnessed the spread of drug trafficking in the main streets in broad daylight.

Sheikh Sameh Ajour, a member of Al-Azhar’s Islamic Research Academy and one of the members of Al-Azhar’s convoy to South Sinai, told Al-Monitor, “Al-Azhar dispatches advocacy and medical caravans to South Sinai and the northern Sinai Peninsula on a regular basis in coordination with the army and the police.”

“While the main issue in South Sinai is drugs, the issue in the northern Sinai Peninsula can be boiled down to the spread of extremist ideas,” Ajour said.

He added, “When Al-Azhar sends advocacy caravans to Sinai, it chooses preachers based on certain religious, political and economic conditions and based on their ability to persuade people. The Sinai citizens are specifically peculiar because they are afraid to deal with strangers and individuals who do not belong to their environment. They were suffering from marginalization throughout the past years.”

Asked about the advocacy caravans dispatched to South Sinai, he said, “The first issue that caravans are concerned with is drug control. The focus is on groups aged from 15 to 30 years in order to influence them and exchange ideas with them about the dangers of drugs and [Islam’s] prohibition thereof.”

“The caravan holds workshops with South Sinai children about drugs to explain their dangers in a way that is appropriate for their ages by showing cartoon clips or simplified theatrical performances,” he added.

Ajour continued, “The caravan includes female preachers whose role is to convince mothers and women of the need to educate their children about [Islam’s] prohibition of drug traffic and abuse.”

He pointed out that “the advocacy caravan includes doctors whose role is to treat drug users, addicts and those suffering from any other diseases.”

Regarding the obstacles facing the advocacy caravans dispatched to South Sinai, Ajour said, “The biggest crisis facing us is that people fear talking to advocates about drugs and the reasons for their spread because they face threats from major drug traffickers.”

He added, “Al-Azhar is concerned about establishing advocacy centers in Sinai for fear of being targeted. However, in cooperation with the army and police, it is organizing advocacy caravans on a permanent basis with the protection of security personnel throughout the day.”

“The governorates of South Sinai and the northern Sinai Peninsula have widely changed compared to past years, as the state has been establishing development projects and assuming security control there. Al-Azhar was not used to previously sending advocacy caravans, especially during the rule of late President Mohammed Morsi, because of the spread and control of drug traffickers and terrorist members and the lack of security [in the northern Sinai Peninsula and South Sinai],” Ajour said.

Mohammed Noureddine, former assistant to the minister of interior, told Al-Monitor, “Al-Azhar’s convoys and the Ministry of Endowments are playing an important role in convincing the people of South Sinai about the dangers of drug cultivation.”

He continued, “The state is aware of the real causes behind the spread of the drug cultivation crisis in South Sinai, which is why it rushed to establish development projects in the governorate and reclaim the vast agricultural areas that people use in drug cultivation. It is also seeking to employ young people to confront unemployment, while carrying out intense security campaigns to remove drug farms and dispatching advocacy caravans.”

During a meeting with Prime Minister Mustafa Madbouly on Sept. 15, Fouda said “the investment plan to establish development projects in the South Sinai governorate for … 2019-2020 has been fully implemented at a cost of about 359.9 million Egyptian pounds (about $22.8 million). The plan includes projects to extend and consolidate electricity networks, pave internal roads, improve the environment, develop security, offer fire and traffic services, support local units and establish tourism projects.”