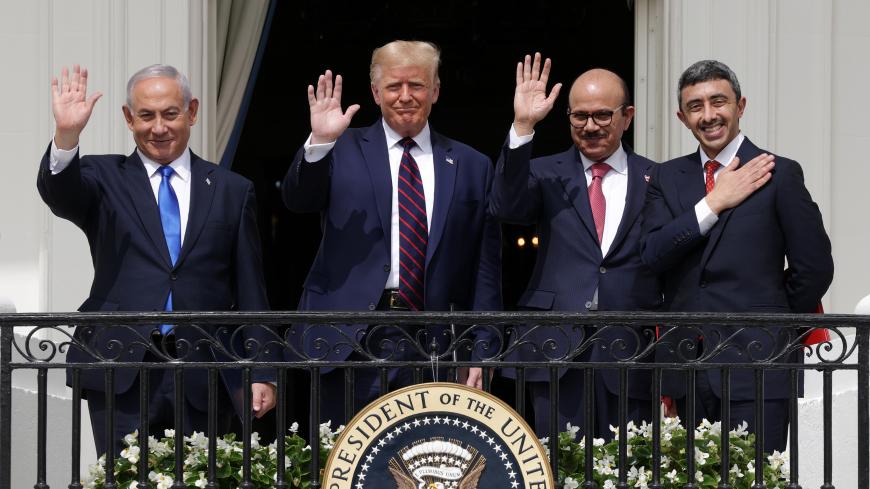 The White House signing of normalization agreements between Israel and both the United Arab Emirates (UAE) and Bahrain scrambled the media storyline of a US president out of his depth in foreign affairs. Most US efforts at peace in the Middle East end up in frustration or worse. White House signing ceremonies are a rare foreign policy prize. In the past four decades, there had been only three such events: peace agreements between Israel and Egypt in 1978, the PLO in 1993 and Jordan in 1994.

Now US President Donald Trump presided over a fourth, less than two months before the US presidential election.

More to come? Israel’s evolving ties with some of the Arab Gulf states has been an open secret for a while, and the Trump administration seized on the trend. The speculation now is that Oman, Morocco and Sudan are already in advanced discussions with Trump’s team, which would like to lock in a few more deals before the election on Nov. 3. The UAE and Bahrain, for their part, would welcome as much company as possible. Israel Prime Minister Benjamin Netanyahu (Bibi) has also claimed that “this peace will eventually expand to include other Arab states and ultimately help bring an end to the Arab-Israeli conflict once and for all,” without mentioning the Palestinians, as Rina Bassist reports here. Bibi would rather do more deals with Arab states than face the pandemic crisis back in Israel (see below).

"A very open mind" The Trump administration made the deals possible by making Israel and Saudi Arabia the pillars of its regional approach. The kingdom was Trump’s first foreign trip, and he has steadied a relationship rattled by the murder of journalist Jamal Khashoggi, the war in Yemen and other issues. While the kingdom gave the nod to the steps by the UAE and Bahrain, the game changer for the region is if Riyadh itself signs up for normalization. The kingdom is the subject of endless speculation about "if" and "when" it will join the club. And probably only about a dozen people in the world know, as King Salman bin Abdul-Aziz Al Saud will keep his cards close. Trump said that the king’s "mind is very open." It’s a tough call for the kingdom, and if the answer is yes, it may choose to play that chit after the election, a kind of welcome gift for a second Trump term or an important gesture to build ties to a Biden White House.

Art of the Deal in the Middle East. The Abraham Accords may give Trump’s critics pause. The region is more transactional than institutional in its foreign policy dealings than other regions. And relationships in the Middle East matter more than anywhere else, which Trump gets. He appears to be on speed dial with the leaders of Israel, Egypt, Turkey, Iraq and the Arab Gulf states.

Democratic presidential candidate and former Vice President Joe Biden, for his part, is also well known and respected in the Middle East, and over the years he, too, has cultivated strong bonds and relationships throughout the region. Indeed, Biden welcomed the Abraham Accords and, if elected, pledged to expand on them. Among the many differences with Trump is that as president, Biden would be more likely to convey increasing Democratic congressional concerns about human rights and related issues in dealing with Egypt, Saudi Arabia, Turkey and the UAE, including arms sales for the war in Yemen, as Adam Lucente reports here. Trump has been less inclined to raise those issues in his dealings with the region’s leaders, preferring to keep the focus solely on strategic and commercial transactions.

Iran: Zarif accuses the US of 'blackmail' as Trump claims deal with Iran likely after US election

No surprise that Iranian Foreign Minister Mohammad Javad Zarif belittled the wave of diplomatic openings as a campaign photo-op, adding that White House senior adviser and Trump's son-in-law Jared Kushner had blackmailed "regional clients" to sign the deals. A few weeks ago, Supreme Leader Ayatollah Ali Khamenei referred to Kushner as “the Jew in the Trump family” and one of the “dirty elements in the United States” who is acting “against the interests of the Islamic world,” as we report here.

"Iran is suffering." Trump views his decision to withdraw from the Iran deal in May 2018 as one of his foreign policy successes. For Biden, Trump’s decision to undercut collective diplomacy in containing Iran’s nuclear program has made the region more dangerous.

The next deal with Iran: Expect Israel, as well as the Arab Gulf states, to be shoulder to shoulder with the United States when a new Iran deal is discussed. Israel’s Ambassador to the United States Ron Dermer told us last month the Iran deal was a "failed experiment" from Israel’s perspective. Dermer said Israel could, however, support an Iran deal that includes “removal of centrifuges, essential to making weapons-grade fissile material; an end to all uranium enrichment; and shutting down all heavy water facilities, which can be used in a weapons program.” The pursuit of civil nuclear power without enrichment is also advocated by the UAE as "the gold standard" for nuclear agreements.

Qatar: Normalization “can’t be the answer”

One country that doesn’t seem to be in the queue for normalization is Qatar, which has been the target of an embargo by the UAE, Bahrain, Saudi Arabia and Egypt since 2017.

US-Qatar Strategic Dialogue. Despite Qatar’s hanging back on normalization, US-Qatar relations are nonetheless strong. US Secretary of State Mike Pompeo kicked off the US-Qatar Strategic Dialogue on Monday by praising Qatar’s “tireless support” for helping broker peace in Afghanistan and "invaluable role in helping stabilize Gaza, as well as regional efforts to de-escalate tensions both in Syria and in Lebanon.” The Qatari delegation was led by Deputy Prime Minister and Foreign Minister Mohammed bin Abdulrahman Al Thani.

AJ+ gets tagged as foreign agent. In the timing is everything category, the Department of Justice tagged AJ+, an affiliate of the Qatari-funded Al Jazeera. to register as a foreign agent. Al Jazeera blamed the UAE for making the designation a condition of the normalization deal, which UAE Ambassador to the US Yousef Al Otaiba denied, informing The New York Times that “at no point in our discussions was Al Jazeera or even Qatar raised.”

Good news for workers. Qatar has introduced new labor reforms to align with human rights and better living standards for migrant workers in the run-up to the World Cup, potentially setting a new regional standard in labor relations. Sabena Siddiqui has the report here.

Healing the rift? Last week, US Assistant Secretary of State for Near Eastern Affairs David Schenker said that there had been “some movement” in repairing the breach in Qatar’s relations with Saudi Arabia and the UAE, that the United States was "detecting a little more flexibility” and that he would like to say there could be progress in “a matter of weeks.”

Israel: Would Netanyahu prefer to stay in Washington?

Now that the signing ceremony is over, writes Ben Caspit, Netanyahu returns to Israel “to reap the benefits while depriving his partners and rivals of any credit and leveraging US President Donald Trump’s achievement. In the coronavirus arena, he is trying to spread the blame in every direction, accusing the political left and the news media, trying to embellish his own actions and promising Israelis full economic compensation and a bright future. His incredible political skills have convinced a significant number of Israelis of this alternate reality.”