The normalization of ties between Israel and two Arab states has left the Islamic Republic uneasy in a region where it is surrounded by more adversaries than allies. 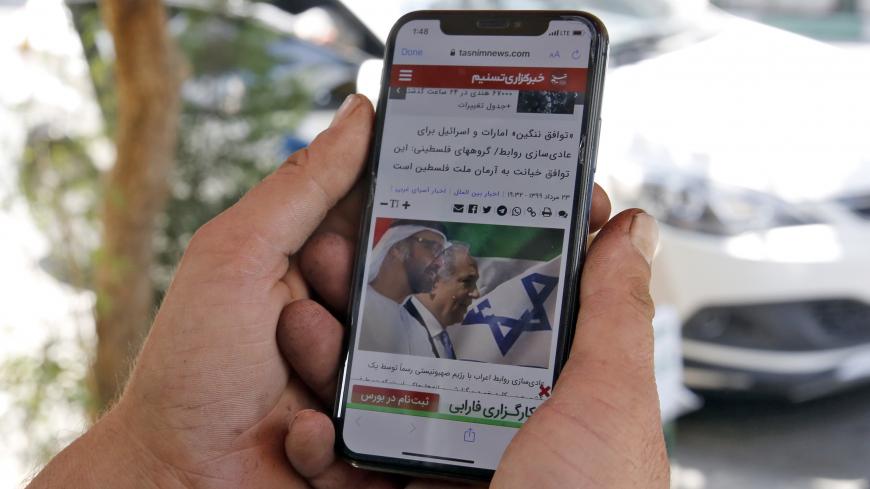 A man holds a phone while reading a Tasnim News Agency article about a US-brokered deal between Israel and the United Arab Emirates to normalize relations, in Iran's capital Tehran, on Aug. 14, 2020. - AFP via Getty Images

In a tweet, Zarif said that he was not surprised by the agreements as Washington’s Arab allies in the Middle East have been Israel’s de facto allies for years. The Iranian foreign minister also accused Trump’s son-in-law, Jared Kushner, of “blackmailing” America’s “regional clients” into the deals.

It was not the first time that Iranian authorities have called Kushner an architect of what Tehran views as “American-Zionist plots” in the Middle East. Earlier this month, Supreme Leader Ayatollah Ali Khamenei referred to “the Jew in the Trump family” and one of the “dirty elements in the United States” who is acting “against the interests of the Islamic world.” In a scathing speech, Khamenei rebuked Emirati officials for their “treason,” which he said will leave behind an everlasting “mark of disgrace.”

The ultraconservative paper Kayhan, run by Khamenei’s office, blasted both Bahrain and the UAE for betraying the blood of Palestinians by signing the accord on the anniversary of the Sabra and Shatila massacre that left as many as 3,500 Palestinian refugees and Lebanese Shiites dead in Beirut back in 1982. The killings were perpetrated by the Phalange militia, operated under the Israel Defense Forces.

Javan, which is owned by the Islamic Revolutionary Guard Corps, also lamented the scene of “the banquet” in which “petty sheikhs danced and sold out al-Quds.” The Arabic name for Jerusalem is often used also to represent the city’s al-Aqsa Mosque, Islam’s third holiest site.

Not only conservative but also Reformist publications spoke out against the normalization pacts with Israel. Despite their intolerance for one another, the leading rival camps in Iran share a fundamental conviction of unwavering support for the Palestinian cause and the struggle against the “Zionist occupation.” Ebtekar, a pro-Reformist newspaper, objected at length to the “black peace in the White House.” It also argued that Iran’s main regional foe, Saudi Arabia, was involved behind the scenes and gave the green light to Bahrain, whose leaders “have become increasingly dependent on Riyadh” in recent years.

“The normalization deal Israel inked with Bahrain and the UAE is an important achievement for the Trump administration,” wrote London-based Iranian journalist Mehdi Parpanchi. “Why didn’t they hold it off until another time closer to the US election day? One possibility is that more Arab nations are queuing to join in the coming two months [before the polls].”

Trump said at the signing ceremony on the White House’s South Lawn on Tuesday that talks were already underway with a number of other countries to enter the club. One of them, according to media reports, is Oman. The country was the last leg of an August Middle East tour by US Secretary of State Mike Pompeo in his mission to bring Arab allies on board with normalizing relations with Israel.

An imminent Omani deal with Israel would be even more disappointing to Iran. Abu Dhabi and Manama were already adversaries whose rapprochement with Tel Aviv was not shocking in Tehran. Muscat, however, has had good relations with Iran for decades, one that mediated preliminary talks between the Islamic Republic and the United States in 2013 that only two years later culminated in the multilateral Iran nuclear deal.