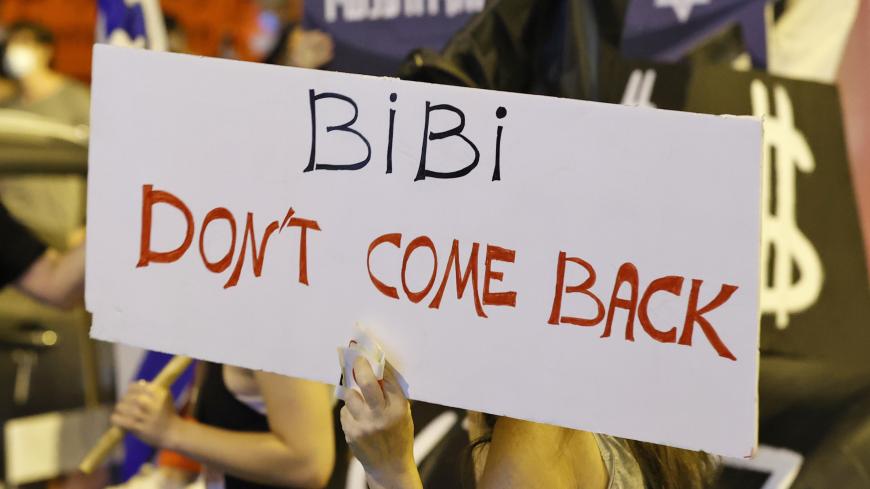 Israeli protesters take part in an anti-government demonstration outside the Ben Gurion Airport near Tel Aviv on Sept. 13, 2020, demanding the resignation of Prime Minister Benjamin Netanyahu over several corruption indictments and his handling of the coronavirus crisis, as he prepares to travel to the United States. - JACK GUEZ/AFP via Getty Images

Prime Minister Benjamin Netanyahu finds himself simultaneously confronting two events of historic magnitude. The first is a tremendous diplomatic achievement with the signing of peace agreements between Israel and the United Arab Emirates (UAE) as well as Bahrain. The second is a colossal failure in the handling of the coronavirus crisis. Under Netanyahu, Israel has reached a health and economic crisis and become the first Western state to impose a second national lockdown at the height of the Jewish high holiday season.

As always, Netanyahu is trying to reap the benefits while depriving his partners and rivals of any credit and leveraging US President Donald Trump’s achievement. In the coronavirus arena, he is trying to spread the blame in every direction, accusing the political left and the news media, trying to embellish his own actions and promising Israelis full economic compensation and a bright future. His incredible political skills have convinced a significant number of Israelis of this alternate reality.

However, as Netanyahu knows, the coming months will likely vanquish even his well-oiled spin machine. The second nationwide lockdown, set for three weeks starting Sept. 18, will destroy what is left of Israel’s previously thriving economy. It is forecast to send tens of thousands of small and medium-sized enterprises into insolvency and dig Israel further into a hole. If Netanyahu can make someone else pay for the downturn, he is a certified genius.

Netanyahu arrived in Washington on Sept. 14 with his wife Sara and sons Yair and Avner. He did not bring Foreign Minister Gabi Ashkenazi, Defense Minister Benny Gantz, nor any other government ministers or Knesset members. Unlike the late Prime Ministers Menachem Begin and Yitzhak Rabin when they signed peace agreements with Israel’s Arab neighbors, he did not honor members of the Knesset opposition, the bereaved families of fallen soldiers or public figures representative of Israeli society with invitations to the event.

Netanyahu set a record for insensitivity when he tried to arrange for his family to fly to Washington on a private plane rather than on the plane chartered for his entourage, to minimize the chances of exposure to the coronavirus during the long flight. The plan was jettisoned in the face of harsh public criticism of Netanyahu and his family.

“The fact that no one in the prime minister’s residence identified the problem of flying off on a private plane to celebrate in Washington while millions of people prepare for a lengthy lockdown and fear economic ruin is very troubling,” a Likud source told Al-Monitor on condition of anonymity. None of the Likud lawmakers dared criticize their leader publicly. Netanyahu and his family still hold absolute control over the party despite Netanyahu’s corruption trial and the economic and health crisis.

This article is being written hours before the historic Sept. 15 White House ceremony, which Netanyahu will attend himself even though his Gulf counterparts sent their foreign ministers. He is making the event his own one-man show in hopes of dimming the glaring mismanagement of the epidemic.

The extent to which the fanfare in Washington will help him preserve public support is unclear. Right now, the Likud is polling at about 30 of 120 Knesset seats. However, all bets are off once the lockdown begins and Israelis spend their second major holiday of the year (following the Passover lockdown in April) without their extended families, stuck at home and gazing with frustration and yearning at other countries where life has long returned to a kind of normal.

The Israeli failure is even more egregious given the advantageous conditions it enjoyed going into the epidemic, with its highly skilled and experienced emergency services, a population used to weathering trauma, the youngest demographics in the West and easily controlled borders. Nonetheless, seven months into the crisis, Israel has still not deployed an effective system for disrupting chains of infection since the health services failed and handed the task over to the military at considerable delay.

Government decisions on handling the crisis are blatantly influenced by political considerations and Netanyahu is unable to admit the truth to his strategically important ultra-Orthodox allies: that the rate of infection in ultra-Orthodox towns and neighborhoods is the highest in the land and these areas are the ones that require a lockdown. Ultimately, the need for a second overall lockdown stems from the government’s failure, due to political pressure, to deal with the epidemic where it has hit hardest, and Netanyahu knows it even as he tries to flee to Washington.

The agreements between Israel and the Gulf States being signed this week and those still to come are bolstering the alliance between Trump and Benjamin Netanyahu.

For Trump, Israeli-Arab peace is an achievement he badly needs in his tight race against Joe Biden, and his name is being mentioned for a Nobel Peace Prize. Netanyahu owes Trump for keeping his head above water. The change of US policy in the Mideast — the clear choice of the Sunni axis over the Shiite enemy — paved the way for the UAE and Bahrain to make a public, strategic alliance with Israel under an American umbrella.

Netanyahu and Trump are now clutching each other for dear life, and according to hints from Netanyahu’s inner circles, they may have further surprises for the Middle East before November.