Religious people in Israel find it hard to understand why political demonstrations will be authorized under coronavirus restrictions while public prayer in synagogues will be prevented. 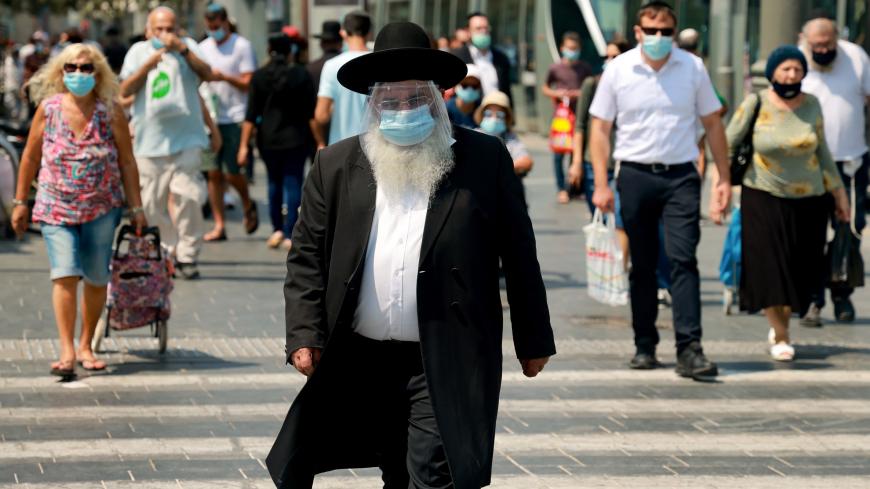 An ultra-Orthodox Jewish man wearing a protective mask and shield against the coronavirus walks along a street in Jerusalem on Sept. 11, 2020. Israel this week imposed new restrictions on parts of the country to confront a resurgence of COVID-19 infections, with the Arab-Israeli community especially hard hit in a second wave. - EMMANUEL DUNAND/AFP via Getty Images

Tension was in the air when the government convened for its weekly session, after canceling the previous two scheduled meetings, to discuss a proposed nationwide lockdown in response to the dramatic uptick in COVID-19 cases that is to begin Sept. 18. Also on the agenda were the protests the night before by thousands of Israelis outside the prime minister’s residence on Jerusalem’s Balfour Street calling for Benjamin Netanyahu’s resignation.

Litzman’s claims highlighted a persistent public argument — why allow densely packed political protests and at the same time ban large prayer services? Mandelblit told the ministers that the so-called “coronavirus law” the Knesset had enacted stipulated four exceptions to bans on gathering: the Knesset (Israel’s parliament), the media, the courts and protests. His comments seemed to suggest that even under lockdown, it would be legally difficult to ban the protests on Balfour Street. If the government wants to prevent or limit protests at lockdown periods, it will have to advance a specific law on that, he said.

Amsalem was beside himself. “Take responsibility. A crowd of 10,000 is allowed?” he shouted at Mandelblit. “Does that seem serious to you? How can you allow this? ... Take responsibility for the disease, the protests undermine public trust. After allowing protests, how can you then tell people they cannot pray?”

Quotes from the stormy debate leaked to the media, as expected, and honed the major dilemma with which the public and politicians are grappling these days. Are protests more important than prayers? Are authorities discriminating against the ultra-Orthodox? And are they silencing the fact that protesters on Balfour Street are being infected with the coronavirus?

The answer to the infection question is complex, because the standard questions asked in epidemiological surveys in Israel to determine where someone was infected do not include “protests” as a possible infection site. Nonetheless, several days ago, Deputy Health Minister Yoav Kisch of the Likud said 55 COVID-19 patients are known to have been infected on Balfour Street over the past three months, 20 of them in the past month. Protest opponents are having a field day with this information, claiming the mass protests are resulting in slackened public discipline.

Hundreds of thousands of Israelis flock to synagogues on the High Holidays, many of them for the one and only time of the year, in addition to those who attend on a regular basis and sometimes three times a day. The government has issued various guidelines for prayers during the holidays, depending on the space and number of doors at each synagogue, and recommended praying outdoors where possible. The Balfour Street protests, on the other hand, will be allowed to continue as long as the coronavirus law has not been amended, stirring resentment among ultra-Orthodox and religious Jews, and raising the question of whether prayers are more important than protests in a Jewish, democratic state, even during epidemics.

This dilemma involves issues of belief as well as political and religious identity and expresses the underlying clash between the values of democracy and Judaism enshrined in the declaration of independence that defines Israel as “a Jewish, Democratic” state. These persistent tensions have intensified given the unprecedented health, economic and political crisis shaking the country. Religious Israelis ask why they should forgo prayers that express their very essence, their identity as Jews and religious adherents, while the Balfour Street protesters enjoy protected freedom to express their beliefs. Is the right to protest a supreme value, even when it does not help curb the spread of an epidemic, to put it mildly?

The former chair of the left-wing Meretz party, Zehava Gal-On, has no doubt about the answer, and she presents her views widely and heatedly on social media. “Prayer is important for the believers and is part of the right to worship,” she recently tweeted. “But not every right can be implemented under certain circumstances. The right to prayer does not necessarily have to be exercised in public, because people can pray at home, too.” Protest is also a fundamental right in a democracy and it cannot be exercised at home and must therefore be allowed in an open space, she said.

Avraham Grinzeig, editor of the popular ultra-Orthodox media platform “Behadrei Haredim,” answered her in an angry tweet. “What ignorance. See-no-evil monkey. Protest by one individual is also a protest to all intents and purposes,” he tweeted. On the other hand, Jews are instructed to pray in public. “A little knowledge of Judaism and Israeli history would have saved this embarrassing tweet,” he added.

A Sept. 13 tweet by popular Channel 12 entertainment show host Guy Pines illustrated the extent of the heated emotions and tribal instincts generated by the protest versus prayer issue. “The tweeted political attempts to compare freedom of protest with freedom of mass synagogue prayer is a hollow provocation taken from a page of political talking points. Religious worship and spiritual prayer do not have to be conducted in masses. The history of the Israelites is full of examples of this during crises, whereas the essence of protest is a power display by many people,’’ he wrote. Pines, a secular resident of Tel Aviv came under sharp social media attacks for his remarks, but did not recant.

The Likud is also adamant. Shlomo Karhi, a kippah-wearing Likud lawmaker, is demanding that the coronavirus law be amended to limit demonstrations in a manner that balances public health and religious and democratic values.

How will this play out in the coming weeks, when thousands are forced to forgo synagogue prayer while the protests continue? The issue is likely to continue stirring emotions in society, the media and among politicians and health professionals. Presumably, there is no avoiding certain limitations on protests; otherwise, authorities will lose all credibility with the public, including the religious and ultra-Orthodox, in their struggle to contain the epidemic.