Netanyahu won't crack down on ultra-Orthodox despite virus surge

Though the ultra-Orthodox community's disregard for pandemic measures has emerged as central to Israel's virus problem, Prime minister Benjamin Netanyahu can't afford to endanger his political alliance with them. 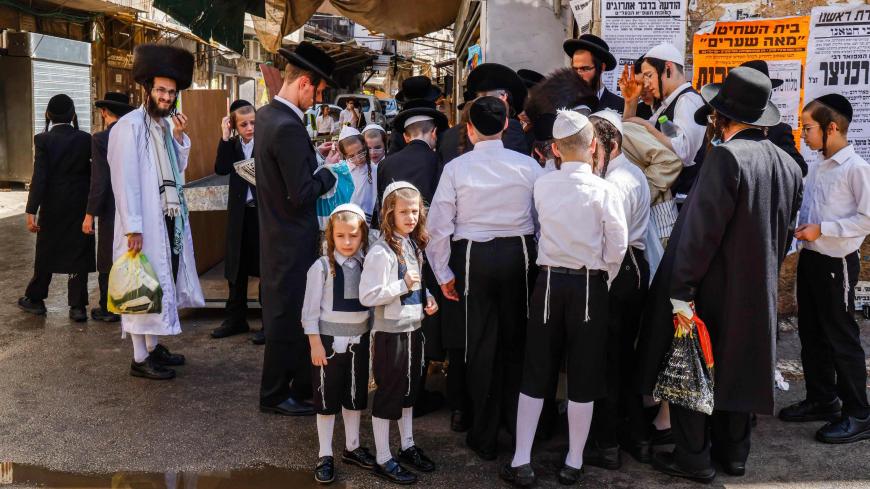 Ultra-Orthodox Jewish men and boys, a few mask-clad due to the COVID-19 pandemic, stand along a street corner in the Ultra-Orthodox neighbouhood of Mea Shearim in Jerusalem a few hours before the start of Yom Kippur on Sept. 27, 2020. - MENAHEM KAHANA/AFP via Getty Images

The long alliance between Prime Minister Benjamin Netanyahu and Israel’s ultra-Orthodox Jewish community is costing Israel dearly in its war with the coronavirus pandemic, according to the Health Ministry’s data on Covid-19 morbidity. The rate of ultra-Orthodox testing positive for the virus is notably higher than that of the general population. In some age groups, the ultra-Orthodox represent 40% of those infected, even though this demographic accounts for only some 12% of the population. The wildfire spread of the epidemic seems to stem primarily from a total lack of state influence over life in the ultra-Orthodox sector.

Netanyahu, who has maintained a firm political alliance with the ultra-Orthodox parties throughout his terms in office, is now the target of widespread criticism. He is being blamed for the failure to impose curbs on the focal points of infection in ultra-Orthodox towns and neighborhoods due to political pressure. Now that it transpires that the ultra-Orthodox infections are the main growth engine of the epidemic, Netanyahu’s alliance with the ultra-Orthodox has gone from political asset propping up his rule to public burden. The prime minister’s opponents are accusing Netanyahu of sacrificing public health for his own interests, his political survival and his bitter war against law enforcement authorities and the judiciary.

The grim state of the health care system, eroded and exhausted by years of personnel and budget cuts, is also linked to Netanyahu’s alliance with the ultra-Orthodox. Since returning to office in 2009, Netanyahu has consistently entrusted the government’s health portfolio to the ultra-Orthodox coalition parties. Knesset member Yaakov Litzman of Yahadut HaTorah served as minister of health and deputy minister of health from 2015 to 2020. Many perceived him as dedicating his tenure to benefitting his constituency rather than the well-being of the health care system.

Litzman was replaced with the formation of the unity government in May, but it was too little, too late. Medical experts attribute the virus' March penetration into Israel partly to the government’s decision to allow in planeloads of ultra-Orthodox Jews fleeing the epidemic in New York at a time when Israel had closed its borders to most incoming traffic. Many medical professionals implored Netanyahu and Litzman at the time to stop those flights, in vain.

Israeli ultra-Orthodox society has for the most part isolated itself in ghettoes where many replicate 19th and 20th century Jewish villages in eastern Europe in a bid to preserve a traditional religious-Orthodox lifestyle and wall itself off from the influences of Western culture on the younger generation. These efforts have been largely successful in isolating the communities from Israeli society, but have also become a distinct disadvantage in stemming a raging viral infection. Given this demographic’s birth rate, the highest in the developed world, Israel’s segregated ultra-Orthodox school system is overcrowded, as are apartments, neighborhoods, synagogues and yeshivas. Tens of thousands of ultra-Orthodox teens board at religious seminaries and colleges in close confines, spending some 16 hours a day studying and praying together in what many consider the essence of ultra-Orthodox life.

“They refused to give it up even when confronted with the concrete threats of illness and death,” a senior medical source told Al-Monitor on condition of anonymity. “Some of them are unwilling to do so even now.”

Health professionals and other officials are limited in their ability to engage in meaningful dialogue with the ultra-Orthodox population, most of which is not exposed to outside media and not connected to digital platforms. Their lives are governed largely by the edicts of their many and disparate spiritual leaders and rabbis. “Imagine having to go from one scholarly authority to another, from one rabbi to another, to convince all of them that Torah studies must be suspended, that synagogues must be closed, that yeshiva students must be sent home until such time as the disease is contained,” one of the officials tasked with this effort told Al-Monitor on condition of anonymity. For them, Torah study is sanctifying God’s name, and not all of them are willing to go along with the restrictions on religious practice, the official said.

Another strictly regimented Israeli community provides a different example of handling the epidemic. With over 1,000 soldiers testing positive and some 14,000 quarantined by Sept. 27, commander of the Israel Defense Forces Lt. Gen. Aviv Kochavi has canceled all leave for tens of thousands of soldiers for one month, cutting them off from their families.

Such measures are obviously impossible in family- and community-centered ultra-Orthodox society. As long as no effective solution is found for this problem, Israel will have a hard time overcoming the crisis.

Netanyahu does not seem to have realized the full extent of the damage cause by his affinity with the ultra-Orthodox. Instead, he is devoting most of his energy to blocking the protests against him, which show no signs of abating even as the epidemic rages. The government is scheduled to continue its ongoing discussion this week of ways to curb the protests, such as limiting protesters to within a kilometer of their home.

Such a measure would put an end to the mass demonstrations taking place outside the prime minister’s Jerusalem residence for the past three months, though Netanyahu knows better than to believe that curbing them would quell the protest movement against him. He seems to be leaving the problem with the ultra-Orthodox to be resolved later. Evidently, their 16 votes in the Knesset are more important to his political survival than containing the virus.