The Department of Justice accused AJ+ of acting "at the direction and control” of Qatar. 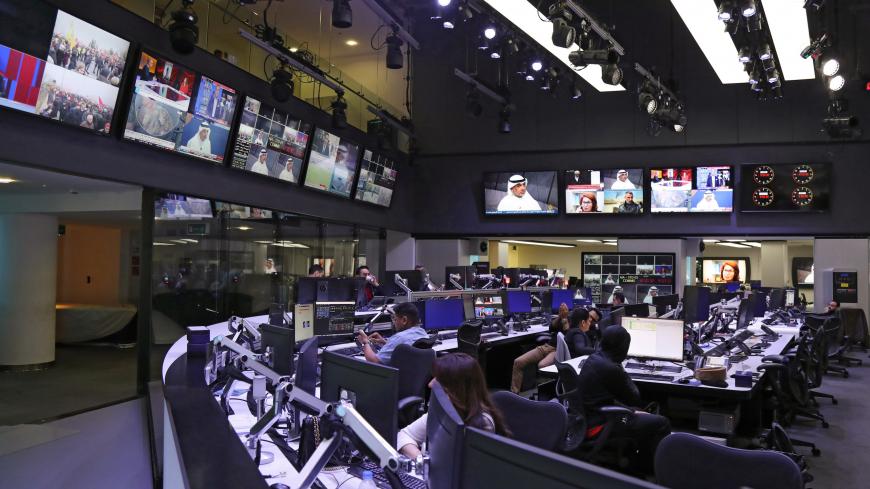 This picture taken on Dec. 5, 2019, shows a general view of the newsroom at the headquarters of the Qatar-based Al Jazeera satellite news channel in the capital Doha. - KARIM JAAFAR/AFP via Getty Images

The Department of Justice is requiring that an affiliate of the Qatari-funded news network Al Jazeera register as a foreign agent, in a move that came the same week the White House orchestrated the signing of a historic deal between Israel and Qatar’s rival, the United Arab Emirates.

Jay Bratt, chief of the department’s counterintelligence and export control section, said in a Sept. 14 letter first reported on by Mother Jones that Al Jazeera’s Washington-headquartered digital outlet, AJ+, acts “at the direction and control” of Qatar and engages in “political activities” on its behalf. As "an agent of the Government of Qatar," Bratt said the outlet should register under the Foreign Agents Registration Act (FARA).

A number of Republican lawmakers have sent letters to the Justice Department calling for Al Jazeera's registration. Last year, the administration ordered Turkish public broadcaster TRT be listed as a foreign agent.

The UAE ambassador to the United States, Yousef Al Otaiba, told The New York Times that the Justice Department’s ordering AJ+ to register was unrelated to the US-brokered agreement that his country signed with Israel on Tuesday.

But in a statement to the newspaper, Al Jazeera Media Network said the timing was suspect.

“The UAE has confirmed it presented the United States with preconditions prior to announcing the Abraham Accords, and we received DOJ’s letter the day before the UAE signed the Accords,” the network said. “The Justice Department just gave the UAE what it wanted.”

The rivalry between the two Gulf states stems in part from Doha’s support for Islamists during the Arab Spring and its relations with Iran, Turkey and the Muslim Brotherhood as well as coverage on Al Jazeera that the Emiratis say destabilizes the region and undercuts their own influence.

In June 2017, the UAE, Saudi Arabia, Bahrain and Egypt imposed an economic and diplomatic blockade on Qatar, accusing it of supporting terrorism. As a condition for lifting the blockade, the so-called Anti-Terror Quartet demanded the tiny oil-rich peninsula shut down Al Jazeera.

The Middle East’s largest news network says it operates with editorial independence and its content does not reflect the positions of the Qatari government or royal family. The network maintains that its public funding model is more akin to the United Kingdom’s BBC or Canada’s CBC than to Russia’s RT.

YouTube, however, includes a disclaimer on Al Jazeera’s content that it is funded in part or whole by the Qatari government. And as part of a push for greater transparency on its platform, Facebook reportedly considered labeling the network as “state controlled.”

AJ+ publishes short-form videos and documentaries geared toward millennials that cover a range of domestic and international topics. But the Justice Department says the content is overtly pro-Qatar, including offering “a Qatari-sympathetic view” of the blockade, promoting “a positive view of Iran” and showing support for the Palestinian cause.

The outlet's staff pushed back at the characterization, with host Yara Elmjouie calling it “absolutely absurd.”

“This is a politically motivated attack on journalists,” Elmjouie tweeted Tuesday. “It will not stop us from telling the stories we tell — at our own direction, & our own control.”

Sana Saeed, another AJ+ host, called attention to the timing of the Justice Department's letter.

The same day AJ+ was told to register under FARA, Qatari officials were meeting with their counterparts in Washington for the third annual strategic dialogue between the two countries. Speaking at a briefing with Qatari Deputy Prime Minister and Foreign Minister Sheikh Mohammed bin Abdulrahman Al-Thani, Secretary of State Mike Pompeo characterized the US-Qatar relationship as one of “true friendship” and called for the region to resolve the Gulf state rift.

“The Trump administration is eager to see this dispute resolved and to reopen Qatar’s air and land borders currently blocked by other Gulf states.”

Doha is currently hosting peace talks between the Taliban and the Afghan government in what Pompeo described as “one of the ways that Qatar is promoting stability in the region.”