The decision came amid an intensifying push by the Donald Trump administration and Congress to get foreign media outlets to register. 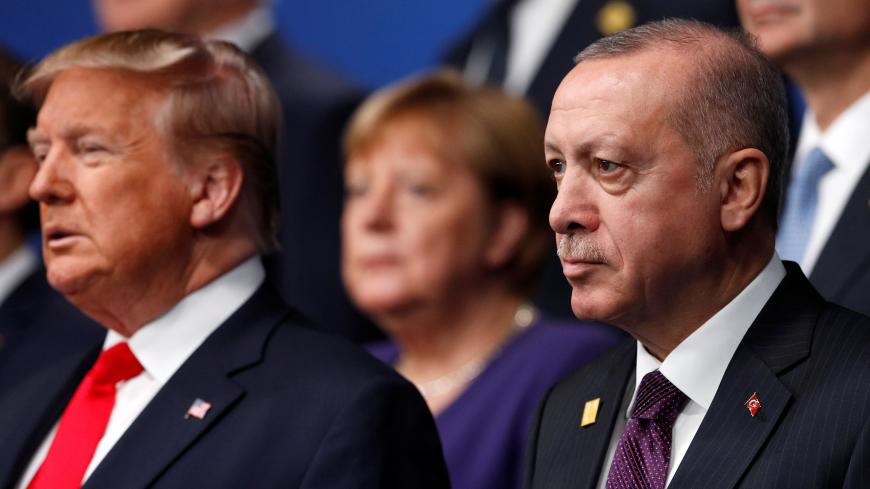 US President Donald Trump and Turkish President Tayyip Erdogan (R) pose for a family photo during the annual NATO heads of government summit at the Grove Hotel in Watford, Britain, Dec. 4, 2019. - Reuters/Peter Nicholls/Pool

The US Justice Department ordered the US branch office of Turkish public broadcaster TRT to register as a foreign agent last year, Al-Monitor has learned, a step TRT only took earlier this month.

In an Aug. 1, 2019 letter obtained by Al-Monitor, the Justice Department concluded that TRT — the Turkish Radio and Television Corporation — is engaged in “political activities” and acts as a “publicity agent” and as an “information-service employee” on behalf of the Turkish government. US officials rejected TRT's argument that it is financially and editorially independent, concluding instead that Ankara “exercises direction and control of TRT by regulation and oversight, and by controlling its leadership, budget, and content.”

In particular, the letter points to TRT's own general broadcasting principles, which require it to “[c]omply with the State's national security politics, national and economic interest requirements.” The registration, the Justice Department letter points out, is not meant to interfere with TRT's content in any way but to ensure that media outlets that purchase its programming, social media outlets that post it and American viewers are “fully informed regarding the foreign influence behind the content.”

A spokesman for the Justice Department made it clear the outlet had little choice but to comply. “If an entity declines to register after receiving a determination letter, we would go to court to obtain an injunction compelling them to register,” he told Al-Monitor.

According to its registration, which Al-Monitor first reported last week, TRT is engaged in “political activities” as defined by the Foreign Agents Registration Act (FARA) through its “preparation and dissemination of informational materials” via its English-language TRT World channel. The broadcaster launched TRT World in 2015 to provide a 24-hour Turkish perspective on world affairs.

TRT’s registration comes amid an intensifying push by the Donald Trump administration and Congress to get certain foreign media outlets they view as mouthpieces of foreign governments to register under FARA. And in August 2018, Congress passed national defense legislation that created a new requirement for foreign media outlets to register with the Federal Communications Commission. The only two outlets to do so to date are Turkey’s Anadolu Agency and Washington-area MHz News, which distributes content from the English-language service of Qatar-based Al Jazeera as well as France’s FMM (France Medias Monde) and Germany’s DW (Deutsche Welle).

TRT insists it is funded by public fees and advertising and is financially and editorially independent of the Turkish government. The sole registered agent on the account, Washington bureau chief Tuncay Yurekli, did not respond to a request to comment about whether TRT thought the demand that it register was fair. But in its filing TRT says it is no different than other public broadcasters.

“Turkish Radio-Television Corporation performs news gathering and reporting activities like those performed by other news and broadcast organizations that are not controlled by foreign governments,” the registration filing states. “Turkish Radio-Television Corporation engages a team of highly qualified professional journalists, editors and producers.”

TRT World’s legal counsel, Efe Poturoglu, emphasized to Al-Monitor that TRT’s FARA filings state that it “operates as an impartial public economic enterprise” and “is not owned or controlled by any entity or any person.”

The Justice Department disagrees, pointing to TRT's reliance on taxes and government grants. The letter requiring registration goes on to detail several instances of what the Justice Department claims are examples of content that “consistently mirrors the policy positions expressed by the Government of Turkey,” notably TRT's reporting on the US-backed Syrian Kurdish People's Protection Units (YPG) and exiled cleric Fethullah Gulen and his followers, all of which Ankara considers to be terrorists.

“A good place to start would be to require Turkish and Qatari state-owned media to register as foreign agents, and to conduct public awareness campaigns to expose these governments’ funding for their media outlets,” the hawkish Foundation for Defense of Democracies wrote in a December 2019 report on the “Turkey-Qatar axis.” The report was authored by Aykan Erdemir, a former member of the Turkish parliament who is now senior director of the foundation's Turkey program, and senior research analyst Varsha Koduvayur.

Steven Stalinsky, the executive director of the Middle East Media Research Institute, also blasted the outlet in a Washington Post op-ed in November, just weeks after the incursion. In the op-ed, Stalinsky called for “American experts and organizations to stop participating in TRT World’s broadcasts, just as they would decline to appear on Russia’s RT.”

Two weeks later, the research institute published an expanded report on TRT World, noting its ties to Turkish President Recep Tayyip Erdogan and his family; the awarding of plaques to three TRT World employees by the al-Qaeda-linked Hayat Tahrir Al-Sham; and alleged examples of anti-Semitism on TRT’s domestic programming. The report also noted that TRT World had not registered as a foreign agent at the time.

Updated: March 23, 2020. This article has been updated with information from the US Department of Justice.

by Murielle KASPRZAK and Joseph SCHMID | AFP | May 26, 2022
END_OF_DOCUMENT_TOKEN_TO_BE_REPLACED