US floats idea of upgrading Qatar to 'non-NATO ally'

A senior State Department official made the suggestion amid a White House push for Arab states to recognize Israel following this year's strategic dialogue with Qatar. 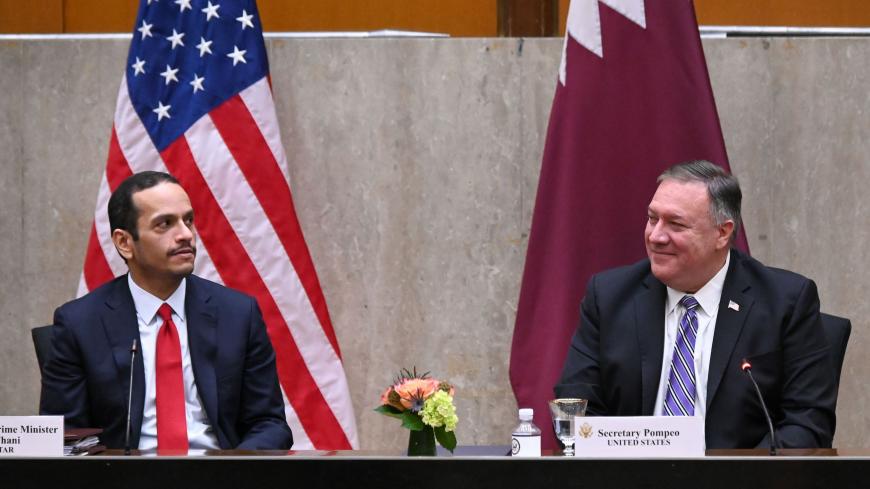 The Donald Trump administration is hoping to upgrade its partnership with Qatar to the status of "non-NATO ally," a senior State Department official said Thursday.

“We're going to move ahead, we hope, with designating Qatar a major non-NATO ally,” US Deputy Assistant Secretary for Arabian Gulf Affairs Timothy Lenderking said on a call with reporters.

Spokespeople for the State Department and for Qatar's government did not immediately return Al-Monitor’s request for comment. Reuters first reported the official’s statement.

Qatar houses the largest US military base in the Middle East, al-Udeid, at which some 10,000 US troops are typically present.

The potential partnership upgrade would put Qatar on the same footing with Kuwait and Bahrain, home to the US Navy’s Fifth Fleet.

Earlier this week, US officials and their Qatari counterparts concluded this year’s strategic dialogue. The discussions in Doha centered on the two countries’ economic and defense partnerships as well as “opportunities for regional cooperation and mechanisms for the defeating of malign actors arrayed against us,” said Qatari Foreign Minister Sheikh Mohammed Abdulrahman Al Thani.

The dialogue came amid a simultaneous push led by the White House to convince Arab leaders to normalize ties with Israel ahead of the 2020 US presidential election.

The United Arab Emirates and Bahrain signed an agreement with Israel, with the United States as the guarantor, at the White House earlier this week.

Qatar, along with Saudi Arabia and Sudan, have not expressed immediate interest.

“We don’t think that normalization was the core of this conflict and hence it can’t be the answer,” Qatar’s Deputy Foreign Minister Lolwah Alkhater said in an interview with Bloomberg on Monday. “The core of this conflict is about the drastic conditions that the Palestinians are living under” as “people without a country, living under occupation.”

The State Department’s Assistant Secretary of State for Near Eastern Affairs David Schenker said last week that there has been “some movement” on repairing the rift between Qatar and its Gulf neighbors that has left Qatar blockaded since 2017.

Schenker said during an event in Washington that he hoped to see progress toward resolving the dispute in the next few weeks.

The US Department of Justice said Monday it would require AJ+, the Washington-based online video affiliate of Qatar’s Al Jazeera news network, to register as a foreign-funded agent that engages in “political activities” on Doha’s behalf.

In a statement to The New York Times, Al Jazeera accused the UAE of requesting the DOJ’s move, a charge Emirati Ambassador to the United States Yusuf Al Otaiba denied.