The Istanbul-based leader of Syria’s opposition interim government has denounced an agreement reached in Moscow over the weekend between the US-backed Syrian Democratic Council and the pro-Russia Popular Will Party. 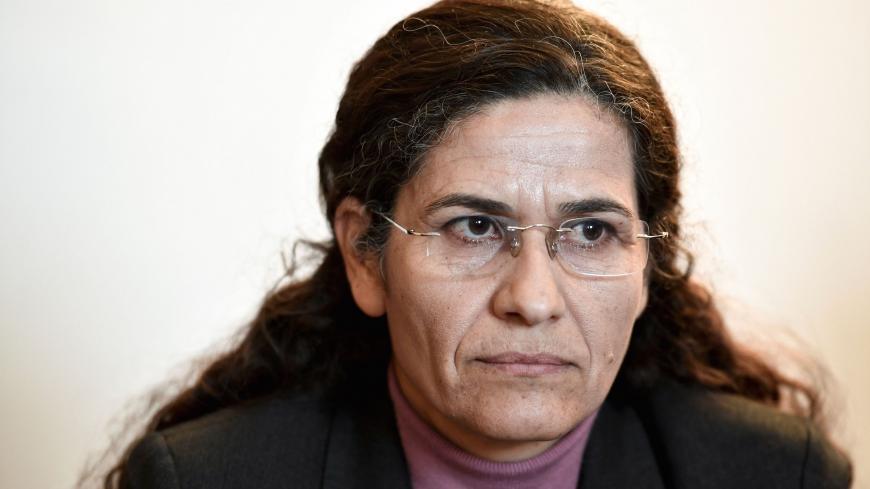 One of the two top political leaders of the Syrian Kurdish alliance and co-chair of the Syrian Democratic Council Ilham Ahmed attends a press conference in Paris on Dec. 21, 2018. - STEPHANE DE SAKUTIN/AFP via Getty Images

The Istanbul-based leader of Syria’s opposition interim government has denounced an agreement reached in Moscow over the weekend between the US-backed Syrian Democratic Council (SDC) and the pro-Russia Popular Will Party (PWP), saying the sides are not legitimate representatives of the Syrian people. Abdurrahman Mustafa was cited by Turkey’s state-run Anadolu news agency as labeling the Kurdish-dominated SDC as separatists, while he accused the PWP of taking its cues from the Syrian regime.

Mustafa was in turn likely taking his cues from Ankara, which conflates the SDC and other components of the autonomous administration in northeast Syria with Kurdish militants fighting Turkey. Turkey formally aired anger over Moscow’s hosting of llham Ahmed, the SDC’s president, never mind that prior to the collapse of Turkish-Kurdish peace talks in 2015, Ahmed used to meet with Turkish diplomats as well. Photos of Ahmed posing alongside Russian Foreign Minister Sergey Lavrov will have added to Turkey’s sense of injury. Turkey’s Deputy Foreign Minister Sedat Onal, who was in the Russian capital for talks on Syria on Aug. 31, did not get facetime with Lavrov.

Why it matters:  Though Washington did not comment publicly, Ahmed’s appearance in Moscow apparently raised some eyebrows in the State Department as well. US policy is to keep the Syrian Kurds away from Russia and the regime and to try to patch relations between them and Turkey. So what was she doing there and what useful purpose did it serve? There are several explanations.

The first is to reset relations with Moscow. Distrust has prevailed ever since the Russians allowed Turkey to invade the Kurdish-majority enclave of Afrin in early 2018 in exchange for its cooperation against jihadis in Idlib. Russia wants the Kurds to make peace with the regime and force the Americans to leave Syria. It has wielded its partnership with the Turks in Syria as a stick against the Kurds to this end and used it to drive a wedge between Ankara and Washington. The results have been mixed.

The signing of an oil deal between the autonomous administration and Delta Crescent, an obscure US company, announced in July, was seen as a new level of Kurdish defiance. The hostile reaction from Ankara, Damascus and Moscow, followed by a joint statement by Russia, Turkey and Iran condemning the deal, prompted the Kurds to reach out.

It’s unknown when Ahmed flew to Moscow but it was clearly before she advertised her presence there in a Facebook post on Aug. 31.

The Kurds fear that unless they appease Russia, it would greenlight another Turkish attack against their territory. Since Turkey’s October 2019 assault, the Russians have taken control over nearly two thirds of Kurdish-administered territory in the northeast. Russian military police are currently deployed the length of the Turkish border running from the Euphrates River to Iraq. Ahmed’s visit was to pre-empt potential Russian retaliation over the oil deal and more broadly to clarify that the SDC had not placed all its eggs in the American basket.

The Russians, for their part, will have relished the opportunity to poke Turkey in the eye as they haggle with Ankara over Idlib and Libya. Any fallout impacting the Kurds’ friendship with Washington would have been a bonus. But there was none.

Upside downside:  As for the agreement with PWP leader Qadri Jamil, though touted as the centerpiece of the visit it was in effect more of a sideshow. Jamil, Syria’s former deputy prime minister for economic affairs and an ethnic Kurd, is formally part of the opposition. He says SDC-linked Kurdish groups ought to be represented at UN-facilitated talks between the regime and the opposition in Geneva. Turkey continues to block their participation and the United States has done nothing to help them. And the protocol inked between the PWP and the SDC endorses many of the autonomous administration’s asks, including federalism for Syria. But “Jamil is Russia’s guy, basically,” said Aron Lund, a Syria expert at the Swedish Defense Research Agency, in emailed comments to Al-Monitor. He has no power to change how the constitutional committee talks in Geneva are set up, let alone to overcome a Turkish veto. Yet, Lund noted, the accord “pleases Russia, it trolls Turkey, it helps build a convoluted case for SDC-linked parties’ Geneva participation. There’s no downside for Ahmed, except having to sit through a boring meeting with Qadri Jamil.”

Know more:  For more on Russian-US friction in Syria read Al-Monitor’s latest Week in Review and for more on Russian-Turkish squabbles read Sultan Kanj's piece on how Russia is gearing up for a fresh Idlib offensive.