The 2020 presidential contender will be joined by a leader of the US-backed Syrian Kurds for President Trump’s big speech. 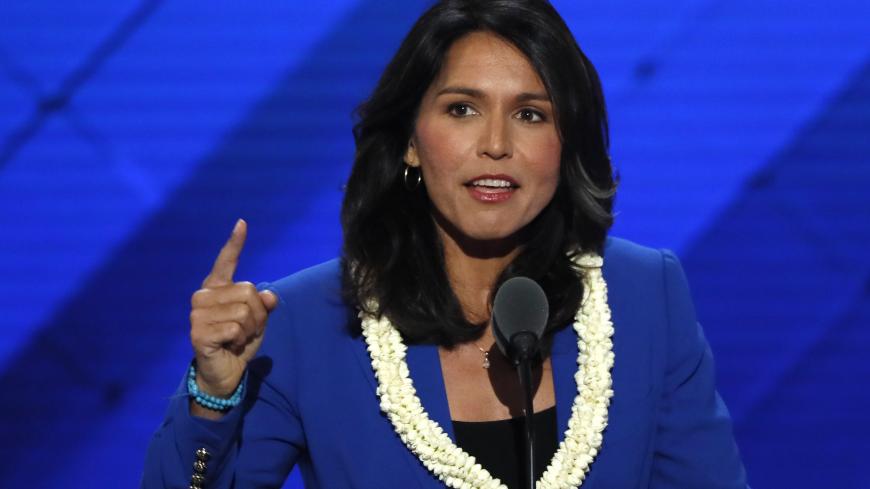 A US-backed Kurdish group fighting to stop the US withdrawal from Syria has scored an unlikely invite to tonight’s State of the Union address from a congresswoman well known for her stance against American interventionism.

In a statement this afternoon, longshot 2020 presidential contender Rep. Tulsi Gabbard, D-Hawaii, announced that she had invited Syrian Democratic Council (SDC) co-president Ilham Ahmed to President Donald Trump’s address. Gabbard called Ahmed “a leader in the battle against ISIS in Syria.” ISIS is an abbreviation for the Islamic State.

The two women could make for awkward seatmates in the House chamber.

The Kurdish leader has used a two-week tour of Washington to push the United States to stand by the Pentagon-backed Syrian Democratic Forces and continue its military involvement in Syria. Gabbard, an Iraq War veteran who stirred controversy two years ago by visiting Syrian President Bashar al-Assad in Damascus, tweeted last month that she wanted US troops to leave the war-torn country “ASAP.”

“We must bring our troops home from Syria, quickly and responsibly,” Gabbard said in a statement today announcing that she had invited Ahmed to the speech. “President Trump’s announced hasty withdrawal from Syria could leave the Kurds vulnerable to slaughter by Turkey’s President [Recep Tayyip] Erdogan who has repeatedly threatened to attack them, and invade Syrian territory long-held by Syrian Kurds.”

It’s not clear how Gabbard became aware of Ahmed’s visit, which generated buzz on social media when the Kurdish leader had an impromptu run-in with the president at Trump International Hotel in Washington last week. When asked about the invitation, a spokesperson for Gabbard referred Al-Monitor back to her official statement.

The invitation immediately earned scorn on social media from the congresswoman’s critics. Her fledgling presidential campaign has been beset by staffing woes, an unwanted endorsement from white supremacist David Duke and an apparent boost from Russian websites that interfered in the 2016 election.

But the Kurds are happy for the opportunity to attend Trump's address. Bassam Ishak, the SDC’s representative in Washington, said Gabbard called him last week with the invitation after his business card circulated during meetings on Capitol Hill. Ishak said Ahmed wasn’t aware that Gabbard was seeking a “quick” pullout from Syria when they received the invitation.

“When I told Ilham … she told me right then that she would go,” Ishak told Al-Monitor. “There wasn’t much analysis to it. She wanted to be there and she was honored that she received an invitation from a congresswoman who represents part of the American people.”

The invite, Ishak said, “whether it’s [from] Tulsi or any other congressman or senator,” shows that the Kurdish message “[has] support among the American people.”

While sitting alongside Gabbard would not appear to advance the SDC’s message to Washington policymakers, allies of the group say it’s an opportunity for Ahmed to show the impact of her trip to Middle East audiences.

“This is not for Americans,” said Diliman Abdulkader, the director of the pro-Israel Kurdistan Project at the Endowment for Middle East Truth in Washington. “This is for Kurds back home and a message to Erdogan and Assad. They will take this home and blast it all over the place.”

The move comes as the Kurdish delegation has openly discussed their willingness to court the Assad regime if talks with the United States to ensure their protection fall through. And despite Gabbard’s controversial stance on Syria, other Kurdish allies said she has proven respectful of their right to self-determination.

“The Kurds are talking, and will talk, to all forces on the ground (Syria, Turkey, Iran, Russia, US) as long as these forces respect their right to exist as a people,” Giran Ozcan, the US representative for the pro-Kurdish Peoples' Democratic Party of Turkey wrote in a tweet. “The fact that she ‘engages Assad’ is also her prerogative. If Assad engages the Kurds respectful of their demands they too will negotiate with him.”