Kurdish lobby struggles to slow US pullout from Syria

An upstart Syrian Kurdish delegation urging the Donald Trump administration to slow the Pentagon pullout from Syria faces significant hurdles to get its message in front of a wary US administration. 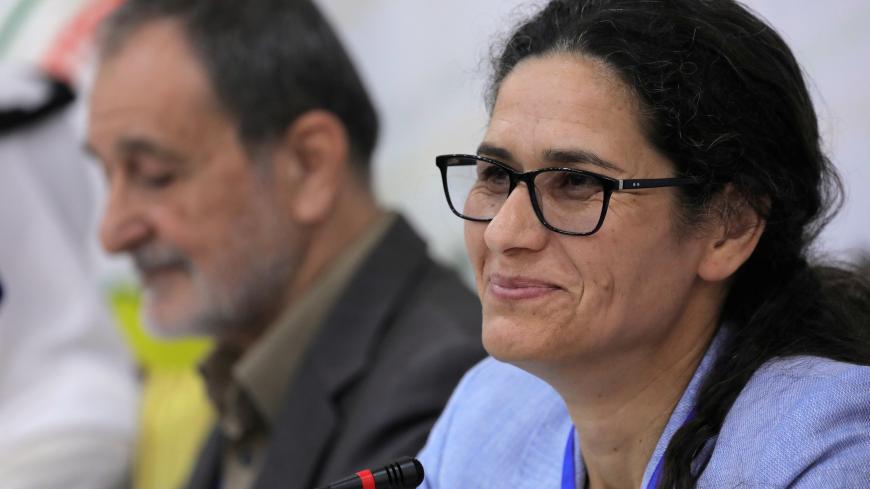 Riad Darar and Ilham Ahmed co-chair's of the Syrian Democratic Council are seen during the third meeting in Tabqa, Syria, July 16, 2018.

Reeling from President Donald Trump’s decision to pull US troops out of Syria, the political wing of the Pentagon-backed Kurdish group that has spent the past four years fighting the Islamic State started the public portion of their 13-day tour of Washington with a bang on Monday, greeting the commander in chief at Trump International Hotel.

It’s not clear how the delegation, led by Ilham Ahmed, happened upon the president. Trump told the group “I love the Kurds” and promised that the US allies are “not going to be killed” by Turkish forces, the Syrian Democratic Committee co-president recalled at a panel earlier this week. The Wall Street Journal reported that the president also said he loved the Turks, the sworn enemy of the group.

The Trump encounter, captured on Twitter by Kurdish allies, reflected the challenges the low-budget outfit faces to get their message in front of the Trump administration as the Pentagon proceeds with a conditions-based withdrawal from Syria.

“It’s kind of like a scrappy gubernatorial campaign,” Nick Heras, a Middle East fellow at the Center for a New American Security, told Al-Monitor. “That’s what people forget.”

Ahmed’s visit, which a spokesman said was organized by volunteers, is run out of the organization’s three-story townhouse near the Washington waterfront. Old boxes are stacked in the entryway and the office is lined with tributes to slain Americans who fought for the group in Syria.

When this reporter arrived at the facility, workers were scrambling to file paperwork to get the Syrian official into meetings with other Pentagon officials. This is the first visit by an SDC leader to Washington since the group registered to lobby last year.

Ahmed, who said she learned of the news of the US pullout by surprise while on a trip in Paris, regretted not coming sooner. The group’s message to Washington policymakers has centered around slowing the US withdrawal, and stopping Turkish plans to police a safe zone on the border of northern Syria, which the SDC sees as a potentially deadly repeat of the 2018 incursion into the Kurdish-held city of Afrin.

“I should have come earlier actually, but I postponed my visit,” Ahmed told Al-Monitor, speaking through a Kurdish-language interpreter. “But after the decision of the withdrawal, we thought it was urgent to come over so we can actually put forward our position to the public and the government of the US.”

It’s not clear how the visit is being treated by US officials. The group’s leaders parried questions about their meeting schedule, choosing instead to release it bit-by-bit on social media.

The delegation didn’t get in the door to see some of Washington’s heavy hitters inside the administration, such as acting Defense Secretary Pat Shanahan, according to a senior defense official. Yet Facebook photos from a US-based fixer for the group showed Ahmed in meetings with Sens. Chris Van Hollen, D-Md., Tim Kaine, D-Va., Rick Scott, R-Fla., Marco Rubio, R-Fla., Ron Johnson, R-Wis., and Joni Ernst, R-Iowa.

Even though the visit is mostly missing the sleek graphics and plated dinners that characterize Washington lobbying, the group still appears to be getting its way on several of its priorities. The Wall Street Journal reported Wednesday that the US administration is pushing for Western nations to patrol a 20-mile buffer zone on the Syria-Turkey border, a potential rebuke of a Turkish-patrolled zone the SDC has lobbied against.

And in Congress, a non-binding resolution led by Senate Majority Leader Mitch McConnell, R-Ky., warning of a “precipitous withdrawal from Syria and Afghanistan,” advanced this week with the support of more than two-thirds of the chamber. Sen. John Kennedy, R-La., also pushed for a Senate amendment to call on the Trump administration to protect the Kurds, which was followed up by a letter from Sens. Marsha Blackburn, R-Tenn., and Tammy Duckworth, D-Ill.

But the initial euphoria from the impromptu Trump meeting may have done little to change the president’s mind on Syria. Though President Trump has backed off of his original 30-day timeline for US troops to leave Syria after a snap withdrawal decision in December, it’s not clear that congressional efforts or the upstart lobbying campaign will change the pullout timeline.

“We will soon have destroyed 100% of the Caliphate, but will be watching them closely,” Trump tweeted this morning. “It is now time to start coming home and, after many years, spending our money wisely.”

Experts tracking the US negotiations over the safe zone say Mazlum Kobani, the commander of the US-backed Syrian Democratic Forces, is intent on keeping US forces inside the country.

“Mazlum is counter-offering, saying that they’ll disarm in a zone if the US stays,” said Aaron Stein, director of the Middle East program at the Foreign Policy Research Institute.

During the visit, Ahmed seemed to be bracing for the worst, warning that the Syrian Democratic Forces would integrate with Bashar al-Assad’s regime as an alternative option if they can’t secure guarantees of US protection. She told Al-Monitor that she’d met with the Russian minister of defense in December.

With the talks over a potential safe zone facing significant obstacles, some experts, such as Stein, see that as inevitable.

“The smart money is on a US-Turkish negotiation failure, opening the way for a Kurdish deal with the regime, and then Russians and regime on the border,” Stein said.