The House’s No. 2 Democrat dealt a major blow to Tulsi Gabbard’s effort to force President Donald Trump to pull the remaining US troops out of Syria. 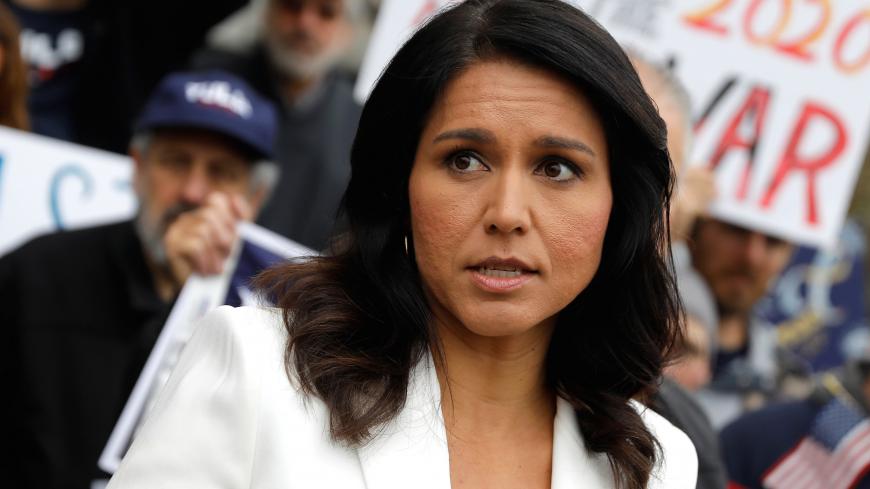 Presidential hopeful Tulsi Gabbard, D-Hawaii, could force a House vote next week that would require President Donald Trump to withdraw the roughly 1,000 remaining US troops from Syria. But there’s just one problem — the House’s No. 2 Democrat firmly opposes her effort.

“I intend to vote no,” House Majority Leader Steny Hoyer, D-Md., told Al-Monitor today. “We haven’t whipped this, but I think our members think an immediate withdrawal would not be appropriate.”

Hoyer’s opposition, coupled with a lack of buy-in from some progressive Democrats and anti-war groups, could significantly hamper Gabbard’s ability to pass the legislation.

The 1973 War Powers Act allows any lawmaker to force a vote requiring the president to withdraw troops from any conflicts not authorized by Congress. The law allows Gabbard to call up a vote on the US troop posture in Syria as soon as Dec. 11.

The resolution specifically takes aim at Trump’s stated goal of “leaving soldiers to secure the oil” in northeast Syria. It would require Trump to withdraw all troops from Syria within two months unless they are “engaged in operations directed at al-Qaeda or associated forces.”

“President Trump’s deployment of US troops to secure Syrian oil fields that do not belong to us, with talks of welcoming in private oil corporations to take the oil, is unconstitutional and a violation of international law,” Gabbard said in a statement last week.

Trump reversed course on a full withdrawal from northeast Syria in October, redeploying some 900 troops to secure oil fields in the area and stating that the United States “should be able to take some.” Shortly thereafter, Defense Secretary Mark Esper told reporters that US troops would primarily guard the oil fields from the Islamic State despite the territorial defeat of the caliphate.

Gabbard, who is leaving Congress in 2021, centered her campaign around opposition to what she labels "regime-change wars.” But she has also developed a checkered reputation on Syria due to her past statements widely viewed as supportive of President Bashar al-Assad.

This is her second stab at a Syria war powers bill, and negotiations over the resolution’s final language remain ongoing.

She introduced a new version of the bill last week after an Al-Monitor report detailed concerns about her initial bill that were raised by some key anti-war groups. Still, several of the activists remain unsatisfied, arguing that the current language could still be construed to authorize military action against the Islamic State.

The resolution’s latest language tracks more closely with a Yemen war powers resolution introduced by her 2020 presidential rival Sen. Bernie Sanders, I-Vt., and Rep. Ro Khanna, D-Calif. Sanders and Khanna succeeded in passing that resolution, which was intended to end US support for the Saudi-led coalition in Yemen, but they did not have enough support to override Trump’s veto in April.

Khanna struggled to get his Yemen war powers resolution passed when he first introduced it in 2017. But the effort gained significant traction after Hoyer and other Democratic leaders backed his legislation last year.

Nonetheless, even Khanna has not committed to voting for Gabbard’s resolution, which still does not have any co-sponsors.

“I still have some concerns as to some of the groups, and we’re trying to work it out,” Khanna told Al-Monitor.

However, the resolution does boast support from two of the dozens of advocacy groups involved in the Yemen war powers push coalition: Just Foreign Policy and Demand Progress.

“It should be an easy yes vote for anyone who believes in the US Constitution and laws, which state that only Congress — not the president — can authorize deployments of troops into harm’s way,” Erik Sperling, the executive director for Just Foreign Policy, told Al-Monitor. “Congress has clearly not authorized our forces to take Syria’s oil, which is illegal, unconstitutional and extremely damaging to our nation’s image abroad.”