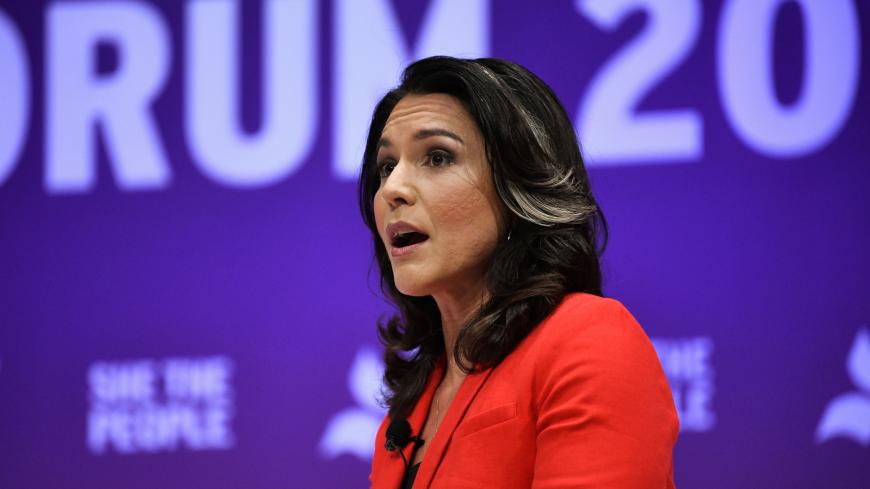 US Democratic presidential candidate Tulsi Gabbard participates in the She the People Presidential Forum in Houston, Texas, April 24, 2019. - REUTERS/Loren Elliott

Presidential hopeful Rep. Tulsi Gabbard, D-Hawaii, quietly introduced a resolution last week that could force the House to vote on a US troop withdrawal from Syria, potentially dividing Democrats and anti-war activists.

The resolution follows the same playbook that her presidential opponent, Sen. Bernie Sanders, I-Vt., used to force a vote on legislation intended to end US support for the Saudi-led coalition in Yemen earlier this year. While Sanders succeeded in getting that resolution passed, he did not have enough support to override President Donald Trump’s veto in April.

As Sanders did for Yemen, Gabbard has filed her Syria resolution under the War Powers Act, which provides expedited procedures that allow any lawmaker to force a vote requiring the president to withdraw troops from any conflicts not authorized by Congress.

Robert Naiman, an independent foreign policy consultant who was heavily involved in the campaign to pass the Yemen war powers resolution, praised Gabbard’s legislation as the next logical step in congressional efforts to claw back war-making authority from the White House.

“If using the War Powers Resolution to challenge unconstitutional US participation in the Saudi war in Yemen was a one-off, we haven’t set a meaningful precedent,” said Naiman, a former policy director at the anti-war activist group Just Foreign Policy. “This opens the possibility of setting a meaningful precedent.”

Although Gabbard has centered her presidential campaign around opposition to what she labels “regime-change wars,” she curiously introduced last week’s resolution with zero publicity or fanfare. Nor did her office respond to Al-Monitor’s multiple requests for comment. Still, she did tweet about Trump’s designs on Syrian oil fields as recently as Sunday — albeit without mentioning her resolution.

“For political reasons, Trump claims he’s against so-called ‘endless wars,’ but he supports [and] is carrying out 19th/20th century-style naked imperialism,” Gabbard wrote. “This is a disgrace to our men [and] women in uniform and [a] great recruiting tool for jihadists.”

The Gabbard resolution specifically takes aim at Trump’s stated goal of “leaving soldiers to secure the oil” in northeast Syria. It aims to force Trump to abandon the mission by requiring him to withdraw all troops from Syria not authorized by Congress’ 2001 Authorization for the Use of Military Force, which the White House has used as the legal basis for its fight against the Islamic State (IS) since the Barack Obama administration.

Defense Secretary Mark Esper told reporters last month that US troops would primarily guard the oil fields from IS despite the territorial defeat of the caliphate. However, Gabbard’s resolution notes that “he confirmed that this includes denying access to the oil from Russian and Syrian forces,” which would fall outside the scope of the 2001 authorization.

The resolution does not explicitly address the US troops stationed in the southern Syrian garrison of al-Tanf to counter Iran.

And while Naiman called Gabbard’s resolution “historic,” other anti-war activists who successfully lobbied Congress to pass the Yemen war powers resolution are less enthusiastic about her Syria resolution. One activist, who spoke with Al-Monitor on the condition of anonymity to candidly comment, called it “half-assed.”

The activist argued that framing the resolution around the 2001 authorization creates “a divisive argument within Congress,” noting that lawmakers otherwise supportive of withdrawing troops from Syria could vote no because they do not want to concede that the 18-year-old military authorization covers operations against IS.

“In theory we absolutely support this,” said the activist. “We support the idea of Congress clarifying that it has not given authority and demanding that the president withdraw troops from an unauthorized mission. That’s not what this legislation does, nor was it done with those of us who have been working on this issue for years.”

Still, Naiman strongly pushed back against the criticism from other activists, arguing that “this is exactly the structure we used to go after the Saudi war in Yemen.”

A spokeswoman for Majority Leader Steny Hoyer, D-Md., told Al-Monitor that the Foreign Affairs Committee is currently considering the legislation. But the committee’s intentions remain unclear; a spokesman for Chairman Eliot Engel, D-N.Y., did not respond to Al-Monitor’s repeated requests for comment. If the Foreign Affairs Committee refuses to advance the resolution, Gabbard could use the War Powers Act to trigger a floor vote — whether leadership likes it or not.

But Gabbard has also developed a checkered reputation on Syria due to her past statements widely viewed as supportive of Syrian President Bashar al-Assad. The resolution also has zero co-sponsors and lawmakers involved in the Yemen war powers push have not yet jumped on board.

Sen. Chris Murphy, D-Conn., who co-sponsored the Yemen war powers resolution, told Al-Monitor today that while the 2001 authorization does not cover IS, Congress should pass a new authorization to cover the anti-IS campaign.

“We should authorize military action against [IS],” said Murphy. “In the absence of congressional authorization to do so, the president should not be taking action that he doesn’t have congressional permission for.”