While Russia blames the United States for adding fuel to the fire of Kurdish separatism, it calls on the Syrian Kurds to lay the groundwork for constitutional reform, so as to contain conflict in the territories over which Damascus has long lost control. 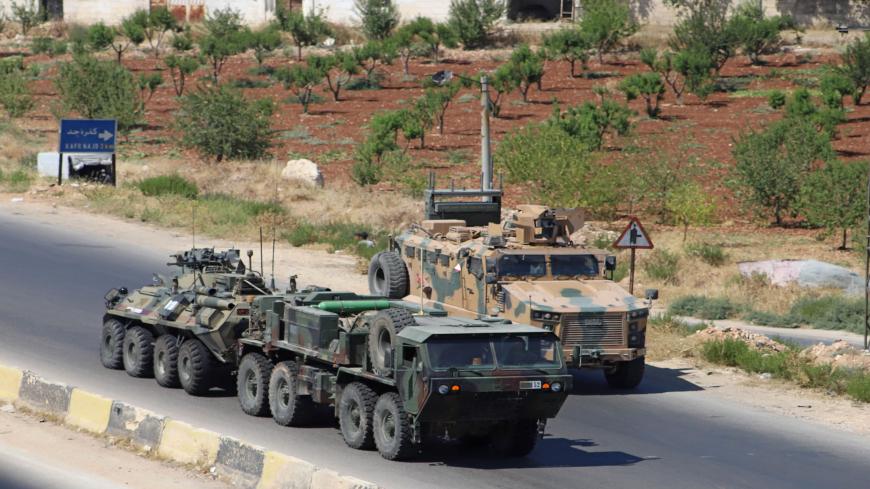 A Turkish-Russian military convoy tows a damaged vehicle after its joint patrol was reportedly targeted on the strategic M4 highway, near the town of Urum al-Jawz in the south of northwestern Idlib province, Syria, Aug. 25, 2020. - ABDULAZIZ KETAZ/AFP via Getty Images

Russian Foreign Minister Sergey Lavrov issued a warning during an Oct. 5 press conference over the risk of an escalation of the Kurdish problem due to the US attempts "to cobble up a Kurdish autonomy." Washington, he said, is known to be talking the Turks “into not objecting to the idea of creating such autonomy, assuring them that the Americans will ensure the Kurds’ loyalty.”

"This applies not only to Syria, but also to the Kurdish problem, which can be so explosive that the current situation will appear much less serious," Lavrov said.

Before that, the Russian Foreign Ministry had commented on a surprise visit Sept. 20 by Ambassador James Jeffrey, the US special representative for Syria engagement, to northeastern Syria, calling it evidence of a "disregard for international law." The American diplomat held meetings there with the representatives of both the Kurdish National Council (KNC), allies of Turkey and the Iraqi Barzani clan, and the Kurdish National Unity Parties (PYNK). The latter was formed in May under the guidance of the Syrian Democratic Command and comprises 25 Kurdish movements and organizations, including the Democratic Union Party (PYD).

Jeffrey’s visit coincided with the announcement of the formation of the Supreme Kurdish Reference tasked with putting together an overarching political strategy of the Kurdish movement in Syria. It was thus predictable for the Russian Foreign Ministry to blame Washington for adding fuel to the fire of Kurdish separatism. Moscow also reiterated its call on the Kurds to contribute toward laying the groundwork for constitutional reform, not just in the context of the Constitutional Committee in Geneva but also in the framework of direct dialogue with Damascus.

This, the Russian diplomatic establishment believes, can help contain conflict in the territories over which Damascus has long lost control. Yet, while Russia made it clear that no settlement is possible without engaging with President Bashar al-Assad, the sole political authority in Syria rescued by Moscow from the flames of revolution, it is nevertheless struggling to outline what role the Kurds might play in the political process. For example, how can the Kurds take part in the work of the Constitutional Committee given Turkey’s ability to veto initiatives?

As early as January 2016, Moscow pursued attempts to bring the Kurdish-led Syrian Democratic Council (SDC), the political wing of the Syrian Democratic Force (SDF), under the auspices of the Qadri Jamil-led Moscow group. The move made sense since at the time Kurdish members of the Cairo group faced opposition from the Riyad group. But in the end, PYD Co-chairman Saleh Muslim could not take part in the negotiations due to Ankara’s pressure despite Muslim’s physically arriving in Geneva for talks.

At the beginning of 2020, reports appeared suggesting that the SDC may join the Cairo Platform to be represented on the Constitutional Committee. At the end of August, shortly after head of the SDC Ilham Ahmed and head of the People's Will Party Qadri Jamil met in Russia to sign a memorandum of understanding, the SDC was rumored to be joining the Moscow group as well. The signing of the Ahmed-Jamil memorandum went largely unnoticed in Russia, yet it received attention of many foreign experts who took note of one of the document’s provisions stipulating the necessity of incorporating the SDF into the Syrian army “on the basis of formats and mechanisms to be agreed upon.” This, indeed, was the point that Moscow developed when putting together its road map to mediate between Damascus and the Autonomous Administration of North and East Syria. Those efforts came after the Kremlin’s failure to impose on the Kurds the same format of reconciliation as it did on southwestern Syria during the period of instability, as US President Donald Trump announced his intention to pull troops out of Syria.

However, the Constitutional Committee, formed two years after the initiative was first announced during the National Congress in Sochi, is yet to launch real work. It is not hard to see why. The regime in Damascus is not eager to pull together its sovereignty and considers itself a victor in the civil war. The regime is also used to dealing with the military and the Russians overseeing the private military groups such as the Wagner private military company over the heads of Russian diplomats. Evidently, Russia’s military clique enjoys higher standing in the eyes of local elites compared to civilians. Moreover, while the list of the conference’s participants can be amended, decisions in this regard can be challenged — and not just with Turkey via the opposition, but from the Syrian regime itself, given how fierce it can be when it comes to protecting its own monopoly on decision-making.

Having said that, however, Moscow cannot directly acknowledge that the political process it has been promoting over the last few years is a mere imitation game, as are its calls on the regime to implement "all the necessary political reforms." Russia’s attempts to extend its influence in the Trans-Euphrates region by creating new bases and engaging in "road wars" with the American patrols also bump into obstacles. Russia cannot be seen as the enabler of Damascus’ destabilizing behavior in eastern Syria, since this would undermine its status as an equidistant mediator in the region.

Hence, Moscow’s double-track approach. On the one hand, it tries to keep its eyes on the ball and win the support of as many ethnic groups in the Trans-Euphrates region as possible. It is revealing that, shortly after Jeffrey’s visit to Syria, Ahmad Jarba, leader of the new Peace and Freedom Front coalition that includes the KNC, visited Moscow to meet with Lavrov. A frequent guest in the Russian capital, Jarba has garnered a reputation as a conduit of Russian interests in eastern Syria. His efforts helped Moscow gather representatives of Syrian tribes in the Sochi National Congress, laying credence to the Kremlin’s claim that the process of crafting a new constitution is conducted in an inclusive fashion and involves various ethnic groups.

In parallel with that, Russia is looking to capitalize on the desire of the United States, Europe and the Sunni monarchies to get the Kurds involved in the political dialogue. Only Moscow’s motivation for getting involved has less to do with willingness to reach a political settlement and more with a pragmatic interest in striking smuggling deals with the SDF alliance, which controls oil fields but also about 70% of crop fields. It is true that the Kurds and the local tribes have tense relations, and it is to a large degree the American influence that keeps those tensions from flaring up. That said, the Syrian intelligence agency's attempts to sow discord between the Kurds and the tribes have largely been fruitless. The truth of the matter is, while under present circumstances the locals can count on their own piece of the economic pie from selling off resources, they are afraid they will be denied those proceeds under the Assad regime.

There are more factors in play that Moscow appears to be turning a blind eye to when dealing with the Kurdish issue. First, the PYD still remembers Moscow’s refusal to offer asylum to Kurdistan Workers Party leader Abdullah Ocalan in 1998. Then there are the Russia-Turkey deals on buffer zones, in particular in Afrin. Second, Damascus and Ankara, although rivals, have since 2016 stepped up talks on the Kurdish question, including talks on independent platforms, for example in Algeria. Third, Russia-sponsored reconciliation deals between the regime and other players in Syria are not without caveats. One example of such an agreement relating to the territories in the southwest led to the drop in the living standards of the local population, as well as to the destruction of the local institutions such as local councils and the decline in the activities of nongovernmental organizations. Seen in this light, Lavrov’s statements that dialogue with Damascus is the only way to safeguard the rights of the Kurds are seen as mere political statements that the Syrian regime may well fail to uphold. Moreover, it’s not like Damascus provided the Kurds a pathway to Syrian citizenship or considered their views before the war.

Even so, the Kurds can use the Russian factor to their advantage. The PYD is mulling the possibility of operating in the same political space as the KNC, even take part in the joint management of territories and turning a blind eye on their Turkish connections that would invite the Turkish National Intelligence Organization to step up its activity, a former PKK fighter told Al-Monitor. All this, though, has to be within bounds of reason, he acknowledged.

The PYD is fine-tuning its image in the eyes of foreign players and tries to keep its distance from the PKK, while also keeping the channels of communications open. Yet neither the PYD nor the PKK are interested in the emergence of dyarchy in the east of Syria, as in Iraq, where power was shared between the Kurdistan Democratic Party and the Patriotic Union of Kurdistan, he said.

According to the source, the Russian policy of having its feet in both camps irritates all Kurds irrespective of their political allegiances. Yet the Kurds still see the Russians as being valuable as a balancer in the emerging political model.