As Turkey prepares for a possible offensive against Kurdish militias in Syria, Moscow is watching for any mistakes that multiple players, including the Unites States and the United Arab Emirates, might make in their efforts to deter the operation. 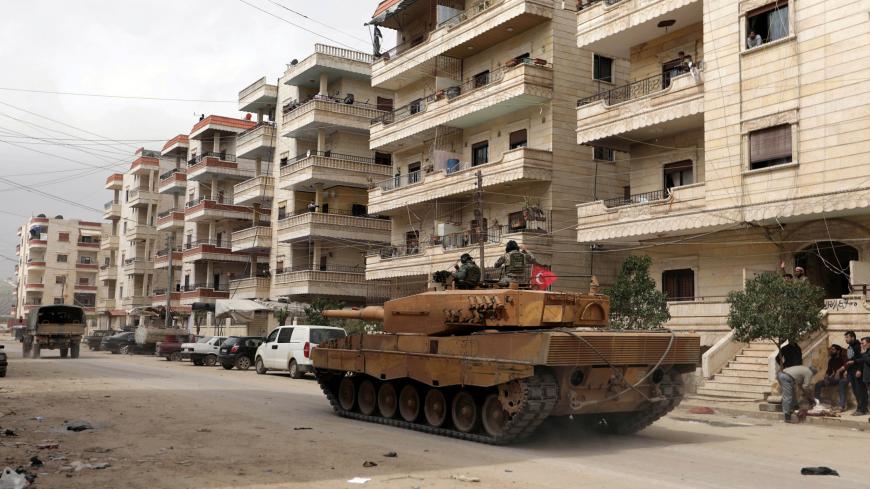 Turkish President Recep Tayyip Erdogan on Dec. 17 ratcheted up his oft-repeated threat to launch a new military operation in Syria by adding the words “at any moment.” Erdogan also claims US President Donald Trump “gave a positive response” to starting the operation, though US special envoy for Syria James Jeffrey said the United States is united in its opposition and the Pentagon warned Ankara against any military move.

So, even as Turkey, Russia and Iran agreed Dec. 18 on a committee to craft a Syrian constitution, it's quite likely that Ankara is indeed planning a military campaign east of the Euphrates aimed at weakening Kurdish militants. Counterintuitively, it could benefit both Russia and the United States.

Turkey’s leadership has long been eyeing the possibility of a military campaign in the area where US-led international forces are deployed, though Erdogan has specifically said he will not target US troops. Erdogan reaffirmed his intentions to fight Kurdish “terrorists” to appeal to his domestic audience and demonstrate the continuity of his foreign policy.

For instance, he mentioned the potential operation in eastern Syria during the final press conference Oct. 27 of an Istanbul summit with Russia, France and Germany. Three days later, he promised members of Turkey's ruling Justice and Development Party (AKP) that he would rid the area in the trans-Euphrates region of militant Kurdish groups. Some Kurdish groups there are backed by the United States in the continuing fight against the remnants of the Islamic State (IS).

Erdogan's Dec. 12 claim that he would start the anti-terrorist campaign in the area “within a few days” upped the ante.

On one hand, Ankara and Washington remain committed to the “road map” of stabilizing Manbij, a city on the western bank of the Euphrates. During the latest consultations, the American-Turkish action group also arranged to continue cooperating on their plans for other areas. Jeffrey said Washington's support for the Kurdish fighters is tactical and temporary, and he met in Gaziantep, Turkey, with representatives of the Kurdish National Council, which rejects the Kurdish nationalist, US-supported Democratic Union Party (PYD). Turkey considers the PYD an affiliate of a terrorist group.

On the other hand, on Dec. 12, Erdogan once again accused the United States of breaking the Manbij agreement and basically decided it should be handled according to his interpretation of the terms. The Pentagon replied that one-sided military actions carried out by any side of the conflict in northeastern Syria are unacceptable. However, the United States has demonstrated its willingness to compromise, as was when the agreements on Manbij were reached.

This time, Erdogan’s statements were not just a means to measure the situation and take a step toward solving the problem of Manbij in Turkey’s favor. He also created conditions where the Americans must respond, either seeking constructive discussion in the lengthy negotiations with Turkey — which Erdogan may view as a pretext to delay the proposed operation without any significant political damage — or ultimately agreeing to surrender some parts of the trans-Euphrates region.

The Turkish side has been making its intentions known for well over a month. In late October, it conducted airstrikes on the Kurdish-held region of Syria's Kobani (Ain al-Arab). Subsequently, Turkish media spread drone footage of Kurdish fortifications in Tell Abyad, Syria, and afterward, military vehicles started to flow into the area of Akchakale, Turkey, which is historically connected to Tell Abyad.

Turkey is now reportedly dismantling concrete border walls in the area and consulting with Syrian rebel leaders, as any operation should include locals who know the area well enough to navigate it flawlessly. There is speculation that 14,000 soldiers of the dissident Syrian National Army, supported by Turkish troops, will take part in the assault. The possible objective of the campaign is to divide the Kobani area from the Jazira region (in Hasakah province), which the Kurds united in 2015 shortly after the Islamic State (IS) was ousted from Tell Abyad.

Here, a parallel with Turkey's Euphrates Shield campaign is clear. Russia, Turkey and Iran — which would later become the "Astana trio" involved in Syria talks in the Kazakh capital of Astana — ultimately managed to prevent the Kurdish-held Kobani and Afrin areas from merging into a unified front along the border between Syria and Turkey.

However, the United States recently established five observation posts in the Tell Abyad and Ain Al-Arab areas to control the border, despite Ankara’s protests. Considering the ethnic diversity of Tell Abyad’s population — Arabs, Kurds, Armenians and Turkmens — the Kurds might surrender the city. But if not, any attempts to bypass the American posts could establish a precedent and lead to severe consequences for the opposition in other areas: Nothing would stop the pro-regime forces, using the pretext of “fighting against the terrorism threat," from getting around similar posts Turkey erected in an Idlib de-escalation zone.

Russia has repeatedly emphasized that Turkey failed to fulfill its obligations to remove the extremist militia Hayat Tahrir al-Sham from the de-escalation zone. Yet the possibility of another exchange between Russia and Turkey, resulting in the withdrawal of the Syrian opposition groups from Idlib to the trans-Euphrates area, also should not be excluded. This scenario would be difficult to carry out but not at all impossible, considering the current conditions in Syria.

In theory, it's possible the United States would agree to the moving of opposition forces into Tell Abyad. However, this measure could be seen as a decision in line with the Astana process policy, which is contrary to US efforts to focus solely on the Syria negotiations held in Geneva.

Following the 11th round of Astana talks in late November, Russian special envoy for Syria Alexander Lavrentiev for the first time focused on the situation in northeastern Syria. It's widely known that Moscow not only expressed concern about the US presence in the area, but has also undertaken practical steps to decrease US influence and bolster its own efforts to end the Syrian civil war. For instance, Russia invited representatives of the Arab Council in Euphrates and Jazira to the congress in Sochi, Russia, in January. Moreover, those representatives cooperate with Ahmad al-Jarba, leader of Al-Ghad Al-Souri (the Syria Tomorrow movement), and the military division of an all-Arab tribal group, the Syrian Elite Forces.

On Dec. 13, Maria Zakharova, spokesperson for the Russian Foreign Ministry, said Moscow believes the United States intends to create pseudo-state structures in the trans-Euphrates area as a “factor of destabilization hindering the process of political resolution.” The statement followed Erdogan’s remarks from the day before that the new operation “would contribute to the resolution in Syria.”

An operation would provide Turkey with a foothold toward further weakening the Kurds, which might make them more cooperative with the Syrian regime. Such an action may also encourage them to develop an economic partnership with Damascus, which in the long run could mean the United States would lose leverage with the Syrian government.

Turkey’s active involvement coincides with rumors about the deployment of S-300 missile systems — supplied to Syria after Russia's Ilyushin Il-20 was shot down Sept. 17 — in Homs and Deir ez-Zor, and redeployment of pro-Iranian militias closer to the line of contact with the regime’s troops and the Syrian Democratic Forces (SDF), a US-supported Kurd-Arab alliance. Also, Damascus reportedly is moving its weapons to the airport in Qamishli — basically at the rear of the Kurdish forces. The PYD has already asked the international community and the Damascus government to unite and resist Erdogan’s plans.

A Turkish invasion, however, is not the best prospect for the regime of Syrian President Bashar al-Assad, even though Assad would appreciate the decrease in American military influence. In that case, the regime might have to deal with potentially gray zones outside its control that it won't be able to reclaim.

And a Turkish campaign wouldn't necessarily mean the United States would leave Syria. The Americans might focus on the issue of Syrian-Iraqi border control, considering that Assad is unlikely to provide the Kurds with guarantees, and they will need the United States to preserve any remnants of their statehood. Moreover, if the Turkish troops do appear east of the Euphrates, Washington will probably use that move to press for the political division of the Syrian Democratic Council, the political wing of the SDF, and to integrate Arab tribes, which are growing more discontented with the Kurdish monopoly. Saudi Arabia and the United Arab Emirates, which have already sent troops to the SDF-controlled territories, are also likely to support these actions, being interested in preventing Turkish influence from increasing in the area. At the same time, the UAE has been invited to join the Astana talks: Will the Turkish action against the Kurds move Abu Dhabi to take a more pro-active stance in the political dialogue, or stop in its tracks its emerging diplomacy with the Syrian regime and the emirate’s support for the return of refugees?