Turkey has once again cut water supplies to the Hasakeh region of northeast Syria, and the autonomous administration says Ankara is risking hundreds of thousands of lives in the midst of the pandemic and soaring temperatures to placate Syrians living under Turkish occupation. 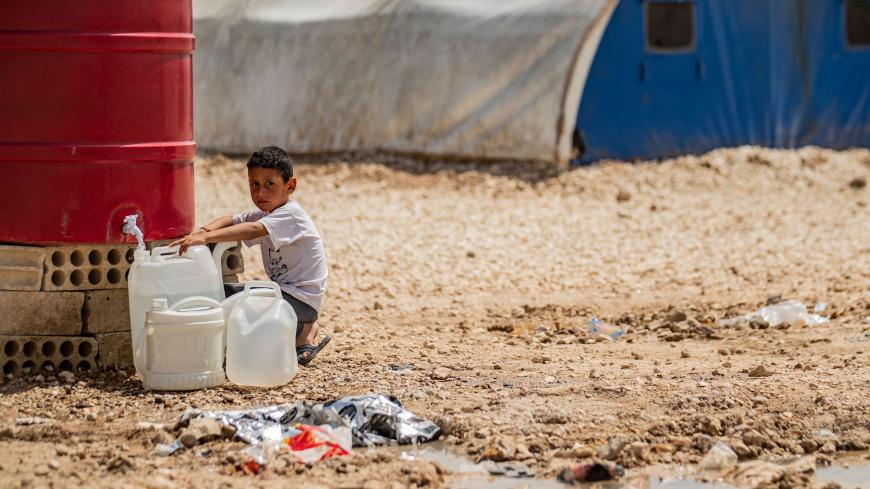 A displaced Syrian boy from Ras al-Ain, a border town controlled by Turkey and its Syrian proxies, fills jerry cans with water at the Washukanni camp in Syria's northeastern Hasakeh province on April 16, 2020. - DELIL SOULEIMAN/AFP via Getty Images

The outcry over Turkey’s continued disruption of potable water supplies to the Hasakeh region of northeast Syria is growing louder. Humanitarian aid agencies and officials in the autonomous administration in northeast Syria say that Turkey is putting hundreds of thousands of lives at risk through its actions in the midst of the COVID-19 pandemic and soaring summer temperatures.

Some 89 civil society organizations noted in a statement published today that Turkey and its Sunni rebel proxies had once again cut off the supply of water from the Alok pumping station near Ras al-Ain on Aug. 13. The station provides drinking water for around 800,000 residents and is also the main source of water for tankers supplying potable water to tens of thousands of internally displaced Syrians and Islamic State prisoners and their families. It was the eighth such stoppage since Turkey invaded Ras al-Ain in the wake of its military assault against US-backed Kurdish forces controlling the area in October 2019. Alok was rendered inoperable during the Turkish invasion and service has been only partially restored.

“Sporadic water forced the population of Syria’s northeast to rely on unsafe alternatives, endangering their lives on top of their fight against COVID-19,” the statement read. “Suspending the Alok water station puts the lives of hundreds of thousands of people at risk, since washing hands with water and [soap] is essential to protect themselves against the pandemic,” the statement read.

At least 20 people have died as a result of the novel coronavirus in the Kurdish-administered area. There are 294 active cases, according to the Rojava Information Center, a research organization that publishes regular reports on northeast Syria. There is mounting worry about the pandemic spiraling out of control. The London School of Economics predicted in a recent study that the number of cases nationwide could reach two million by the end of August.

Nushin Ibrahim, a 22-year-old woman in Hasakeh city contacted by Al-Monitor through the Rojava Information Center, said, “We haven’t had water for the past 25 days. In this situation, with the virus spreading and the water cut off, we are unable to take any precautions against the coronavirus. The media tells us that we have to wash our hands every half an hour, but when water is unavailable this makes it very hard.”

Ahmed al-Khelil, another resident of Hasakeh city, said, “We don’t have drinking water or even any water. The lack of water creates both health and psychological problems. Water is a basic human right. But we are struggling to find water because it’s very expensive to purchase, and that’s if you actually find someone who is willing to sell it.”

The autonomous administration accuses Turkey of weaponizing water as a means of forcing it to supply electricity to the territory covering 1,100 square kilometers (680 square miles) in northeast Syria currently under Turkish control. If Turkey were to have its way, people living under Kurdish rule would receive comparatively less power as a means to help Turkey placate Syrians living under its own occupation. The stoppages are seen as part of a broader Turkish effort to suffocate the Kurdish-dominated autonomous administration through a mix of political, economic and military pressure. Even as it starves the area of water, Turkey has kept up its attacks against Syrian Kurdish forces with artillery strikes and armed drones.

Sinam Mohammed, the Washington representative of the autonomous administration’s political arm, the Syrian Democratic Council, told Al-Monitor that that the administration had held “an urgent meeting with American diplomats in the region” about the water cuts and had “called upon the United States to impress upon Turkey that its actions are wrong and must be stopped without delay for the sake of more than three quarters of a million innocent Syrian citizens.” Mohammed said the meeting took place on Aug. 22. She said US officials had pledged to discuss the matter with Turkey "and try to solve the problem.” Turkey denies the accusations. The State Department did not respond to Al-Monitor’s request for comment.

Jim Jeffrey, the United States’ envoy for Syria engagement, is known to have raised the issue in private meetings with his Turkish counterparts numerous times. But Washington has yet to formally condemn Turkey for the stoppage. Jeffrey is expected to travel to Ankara Thursday after taking part in UN-sponsored talks between members of the Syrian opposition and representatives of the Syrian government that kicked off in Geneva today. The Democratic Union Party, which is part of the autonomous administration, remains unrepresented at the talks because Turkey opposes its presence.

Russia, which has been mediating between Turkey and the autonomous administration, is either unable or unwilling to get Ankara to change its stance on the water issue.

The central government in Damascus has offered the Kurds some rare support. The permanent representative of Syria to the United Nations, Bashar al-Jaafari, said in a telephone call with UN Secretary General Antonio Guterres, “The Turkish aggressive behavior to cut off drinking water to Hasakeh is a war crime and a crime against humanity.”

Joseph Lahdo, the co-chair of the local administration and municipalities authority in northeast Syria, said emergency measures were underway to address the water shortage. They include digging 100 wells connected to a redistribution center in Khirbat Hammah northwest of Hasakeh. But Lahdo said this would solve only “50% of the problem.”

The flow from Alok reportedly resumed yesterday after the autonomous administration cut off electricity to the Turkish-held zone as a last resort. But the water has yet to reach residential areas in Hasakeh city, said Thomas McClure, a researcher at the Rojava Information Center.

“Even before [Aug.] 13 many neighborhoods were without water for one or two months because the water supply is so low,” McClure told Al-Monitor.

In an Aug. 21 letter addressed to Guterres, the Damascus-based head of the Universal Syrian Orthodox Church called Turkey’s actions “a crime against humanity.”

Ignatius Aphrem II said, “Using water as a weapon — which is not the first time — is a barbaric act and a flagrant violation of fundamental human rights. Yet, there has been no response form the international community to this atrocity despite the constant appeal of the people of the region.”