Abdel Rahman Salih al-Shanti, an 11-year-old rapper from the Gaza Strip, has made international headlines, with English rap songs evoking Gaza’s wars and sufferings under the Israeli blockade. 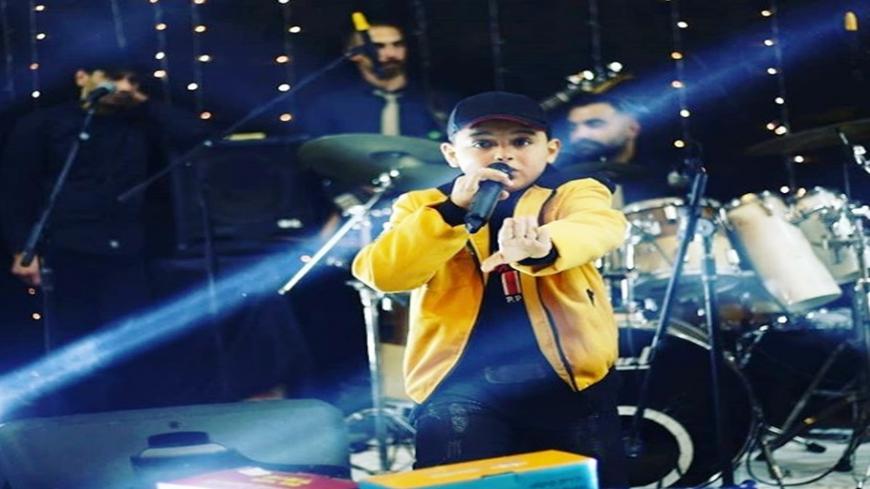 Abdel Rahman Salih al-Shanti is an 11-year-old rapper from the Gaza Strip, who found his calling when he was only nine years old. Shanti raps songs in English, addressing the dire situation in Gaza and the suffering of Gazans — and especially the children — under the Israeli blockade that has been in place on the coastal enclave for 14 years now.

Shanti’s talent has gone beyond the borders of Palestine, reaching millions of viewers and listeners around the world through social media.

One of his video clips where he appears rapping in fluent English standing outside of his elementary school in Gaza City, surrounded by his classmates, received thousands of views on social media sites. Shanti says he is influenced by international rappers and hip-hop artists such as Eminem, Tupac, Waheeb Naasan and Masari.

“My goal is to convey a message of peace and hope from the Palestinian children to the rest of the world and to highlight their suffering and inability to fulfill their dreams under the Israeli blockade. They deserve to live a better life away from occupation,” Shanti told Al-Monitor.

“My idol is Eminem. I want to be like him,” he said. Over the past two years, Shanti composed over 30 rap songs, addressing the hardships of the Palestinians and their crushed dreams and future hopes of living in freedom and peace.

“I am here to tell you our lives are hard. We got broken streets and bombs in the yards,” the lyrics of his “Gaza Messenger” song say, referring to Israel’s three wars on the Gaza Strip. The song and video clip has had over 517,000 views on Instagram so far.

“I was born in Gaza City and the first thing I heard was a gunshot. In my first breath, I tasted gunpowder,” the lyrics of “Peace” go.

The young rapper said that his songs are inspired by the hardships of Gazans, and that he wants to convey this message to people around the world through rap, which he sees as the most popular and widespread form of vocal art in the world. He added that he made sure to sing in English so his messages reach Western audiences, “so that everyone will know the hardships, sufferings, oppression, injustice and racism the Palestinian people in general — and Gazans in particular — are facing,” Shanti said.

Youssef Abu Hassira, 14, is a fan of Shanti and of his songs. “Gaza lacks rappers and hip-hop artists who sing for higher causes like Shanti. They give up easily because it is very difficult for them to leave the Gaza Strip to go abroad to nurture their skills and develop their talents due to the Israeli blockade and the closing of border crossings,” Abu Hassira told Al-Monitor.

Sahar al-Nimrah, another 14-year-old fan, told Al-Monitor, “I enjoy listening to Shanti’s songs although I don’t quite get all the English lyrics, but I like his movements and the fast tempo and beat of the songs. But I am well aware of the noble message he is trying to convey to the world, unlike the usual rap songs that often deal with misery, drugs and moral deviations.”