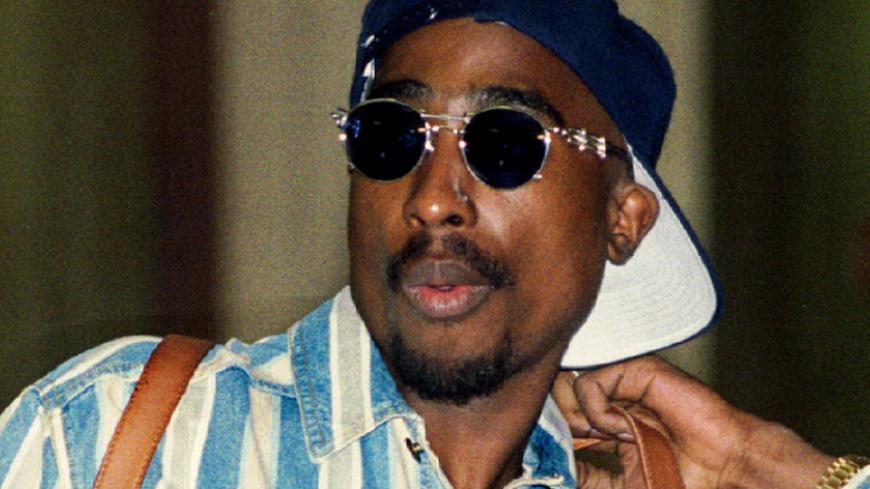 Rap singer and actor Tupac Shakur is shown as he arrives for a court hearing on weapons possession charges at the Criminal Courts Building in Los Angeles, Sept. 27, 1994. - REUTERS

"They want you to change as they don't really care about you, they don't accept anyone who isn't like them — And you, do you care about yourself?" These are the opening words of the song "God willing" by Kalkidan, an Israeli rapper of Ethiopian origin. The song is about the identity crisis he experienced when he was required to change his name, "great promise" in Amharic, for a Hebrew name fit for Israel. "Your name meant a warrior — not an inferior. Do you want to become a part of the melting pot? Dude, that's nothing but a lot of hot air."

He goes on, "Maybe you should take a few seconds to think of a Hebrew name. Avraham, Yitzhak or Yaacov, a common name or a biblical one ... at the age of three rap was a drug. Today it's a weapon."

The recently published book "Listening to Black: Black Music and Identity Among Young Ethiopian Immigrants in Israel" analyzes the role of African-American music in shaping the identity of Israelis of Ethiopian origin. It offers some far-reaching conclusions. "The establishment sought to lead youths in the Ethiopian-Israeli community through a socialization process that would ultimately imbue them with the national Israeli-Jewish spirit, leaving but a tinge of their traditional Jewish-Ethiopian identity," writes author David Ratner. "Considering this, it is striking that many young Israelis of Ethiopian origin have chosen the hip-hop culture as a major source of identification. And one may wonder why."

In the Israeli music scene, where the local version of pop-rock — and in recent years, MidEastern pop, too — set the tone, the hip-hop trend may signify an identity crisis and a refusal to integrate into Israeli society. Ratner argues otherwise. "This culture" of hip-hop "serves as a symbolic resource on which they draw to mobilize the forces of resistance, creativity and political relevance of the global black diaspora, evolved over the past 150 years," Ratner writes.

Ratner has interviewed dozens of young Israelis from the Ethiopian community and, as he explains in his book, most of them not only strongly connect to what he lumps together as "black music," but have no taste for Israeli rock and actually loathe Middle Eastern music. Surprisingly, they perceive the Middle Eastern genre as the music of oppressors. The way they see it, Sephardic Jews (of Middle Eastern origin, who themselves suffered from discrimination) are the rulers of the country, since they dominate the neighborhoods settled by immigrants from Ethiopia. "They are on top here ... they have power in the country," a boy named Mengistu says in the book, explaining why he dislikes Israelis of Moroccan descent.

"It's easy for us to get fired up about hip-hop — it's the music, the sounds and the message that do it," Ethiopian-Israeli hip-hop artist Reuven "Taderos" Aargau explained to Al-Monitor. Aargau, a member of the musical duo "Axum," went on, "There are clubs that play nothing but black music. No trance, no Middle Eastern, no rock music." He said that as a boy, he used to be "in the Tupac [Shakur] camp, because of the movement he led, and the views he voiced against racism and the hard time blacks had in society. I identified with it."

Rapper Tupac stands out in Ratner's book as the most influential artist in shaping the identity of youths of Ethiopian origin in Israel thanks to his unwavering social stance against racism. Mengistu is quoted as saying that Tupac "strengthens me, giving me the power to carry on."

Amos Harel, the military analyst of Haaretz daily, told Al-Monitor, "It's amazing. One of the leaders of the Ethiopian protest [in 2015] said in an interview that you wouldn't find a home in the Ethiopian community where teens live without a poster of Tupac decorating the walls." Harel, who also covers the local black music scene for the newspaper, addresses the role of black music in shaping the identity of soldiers of Ethiopian origin in his 2013 book, "Let Every Hebrew Mother Know: The New Face of the IDF." Incidentally, the book cover features an IDF officer of Ethiopian origin named Ilak Sahalu, who has eventually become known as a member of "Strong Black Coffee," a highly successful hip-hop duo, one of the top rated in Israel.

"You could ask, what has Tupac to do with all that?" Harel said. "After all, he died in 1996 in Los Angeles. But his hip-hop is a crucial element in their identity. It's quite different from a light-skinned native Israeli listening to hip-hop music just for fun."

"Hip-hop as a trendy musical genre is not how [Israelis of Ethiopian origin] normally experience it," Ratner told Al-Monitor. "They say: Faced with racism, let's take black music as an empowering, inspiring source of strength that gives us the power to carry on." He added, "Israeli youths of Ethiopian origin create an imagined geography — a space of black identity associated with the global black diaspora. It is an empowering experience for them, contrasted with that of the disadvantaged black in white Israeli society, which views them judgmentally."

This is why young Israeli-Ethiopians blend Jamaican, African and American elements in their music, irrespective of the differences. This musical genre's derivation from what they see as the “international black nation” gives these young people a stable sense of identity, Ratner argued.

Harel, for his part, noted that his impression from speaking with Ethiopian community members was that "they live within the Israel-Ethiopia-US triangle, which reflects a certain detachment, a kind of defiance — I'm from here, but I'm unlike you." Ratner insisted in his conversation with Al-Monitor that it isn't the disinclination to integrate into Israeli society that is behind it. Rather, he maintains that rap allows them "to decipher what's going on in Israel with the tools they acquired from African-Americans who went through similar experiences in the US, and [at the same time,] to fight for their place here."

According to Ratner, this music allows these Israeli-Ethiopian youth "to be 'black' in a 'white' society. It's something that no other musical genre offers them. Through the music, they can relate to a large and proud population that has shown resourcefulness and creativity on the political, cultural and economic levels. The starting point is Israel, and [their] hip-hop has its origins in their experiences in Israeli society. It allows them to establish a strong identity and to cope with the challenges they face in Israeli society."

This explanation is aptly reflected by Taderos, who said, "In my songs I try to bring another point of view, another solution, to create something new, to rise above it all. My messages are essentially social; they deal with the way we relate to each other in our familiar circles, and with the way we treat strangers on the street. Right from the start I had a vision: that Ethiopians shall become a force in society and that we ourselves will be among the first to accomplish it, serving as a model to be followed." For him, hip-hop is a tool for improving Israeli society rather than for going up against it.